Netflix advertises Rolling Thunder Revue: A Bob Dylan Story by Martin Scorsese as “an alchemic mix of fact and fantasy,” an apt description for a film that appears to be a standard music documentary, but in fact is anything but. Like a typical documentary, the two-and-a-half-hour film combines live concert footage from the 1975-1976 tour, which featured Dylan alongside a large lineup of other performers, with backstage footage, B-roll and modern-day talking head interviews. The thing that makes this documentary so unconventional? Several of the characters are not real people, and their stories about the events of the tour are fictional.

This strange blending of fact and fiction is, unsurprisingly, the main focus of most of the media attention the film has received. Film critics have devoted themselves to unraveling the truth in Rolling Thunder Revue, but simply separating fact from fiction does not answer the deeper question: Why make a documentary that is nearly as much fiction as fantasy, and why deliberately attempt to blur the two? 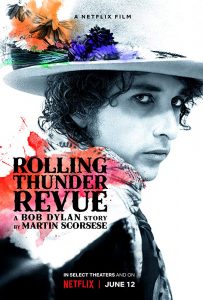 The question of truth in documentary has been debated for nearly as long as the genre has existed. In constructing the point of view necessary to give a documentary its emotive power, a certain amount of bias is inevitable. But the amount of fictionalization in Scorsese’s Dylan film goes a step beyond what audiences typically expect from documentaries. Most of the footage is recycled from a fiction film that Dylan was shooting on the tour called Renaldo and Clara, which never received a widespread theatrical release, and Dylan’s reputation as a trickster shines through in his interviews. Toward the beginning he quips, “[Rolling Thunder] is about nothing. It’s just something that happened 40 years ago.” A time which, he adds, “happened so long ago, I wasn’t even born.” The B-roll adds to the sense that something here isn’t quite right. The film begins with an old reel of an obviously fake magic trick and is punctuated with clips of people donning masks.

Scorsese’s focus is not in showing us Bob Dylan the man and artist, but rather the semi-mythic figure he has become in American culture and rock history. Between clips of the tour itself are scattered myriad clips of Americans living their everyday lives, of citizens celebrating America’s bicentennial, and of presidents from Nixon to Carter addressing the nation. The implication is that Dylan in not just an artist unto himself; he is an integral part of the American cultural landscape, and the Rolling Thunder Revue encapsulated America at the time it occurred.

The film also shows Dylan traveling to small towns, bringing his show to the working class, and advocating for minorities. He performs a concert on a reservation, and the tour shares the name of a famed Native American chief (though no fewer than three different explanations are given over the course of the film for why the tour might have been called Rolling Thunder). The film also explores how Dylan helped to get Rubin “Hurricane” Carter out of jail for a false murder conviction after publicizing his plight in the song “Hurricane.” And though Dylan’s Judaism is not mentioned in the film, the Jewish viewer can’t help but be reminded of how Dylan has become a hero of sorts for Jewish America as well.

The film’s title belies its preoccupation with mythmaking. Despite being called “A Bob Dylan Story,” the film manages to tell us very little about who Dylan is as a person. It hardly delves into the singer’s personal life at all, leaving out seemingly crucial details, such as the disintegration of his first marriage, which was occurring as the tour was in progress. Instead, we catch glimpses of Dylan through the people he surrounded himself with on tour, several long clips of concert footage, and the talking head interviews filmed long after the fact. And even then, we often must infer his feelings based on appearances rather than anything he says.

Stefan van Dorp, the fake cameraman (played by Martin van Haselberg) who ostensibly followed Dylan on tour and filmed the original footage, provides several insightful observations on who Dylan is to his fans. Just over ten minutes into the film, van Dorp describes meeting Dylan: “It was like looking into a mirror. You either saw what you wanted to see, or you hated what you saw.” For so many Dylan fans, this is the essence of his appeal, especially considering how private he is about his personal life. Fans may speculate about how his lyrics reflect his own life, but the enduring legacy of Dylan is in the poetry of his lyrics, and the ability of fans to hear parts of their own lives reflected in them.

Ultimately, that is the purpose of Rolling Thunder Revue: to say as much about Dylan’s cultural influence, his place in American mythology, as it does about the man himself. Combined with moving concert footage, Dylan’s sly act of mythmaking is worth the watch for the entertainment value alone. And for the most serious of Dylan fans, the film urges us to reflect on the artist’s massive influence. Very few artists can say that they have successfully woven their way into the very fabric of American culture, but Bob Dylan is one who has, and Scorsese shows that, if not by the most conventional documentary route.