Stuck in a small provincial Latvian backwater, Ansis ekes out a living painting the town’s signs, dreams of a better life as an artist and chases the local Jewish beauty, Zisele—the daughter of wealthy merchant Solomon Bernstein. Ansis’ father refuses to allow him to marry the girl he loves because, he believes, “Jews bake the blood of Christian children in matzah.” A fellow sign painter tells Ansis, “Don’t you meddle with Jews…they killed Jesus.” And the local priest warns him to forget about Zisele, though the church will not object if she wants to convert.

A headstrong feminist, Zisele tries to persuade Ansis of the attractions of Communism but leaves to study at the Teachers’ Institute in Riga. Still in love with her, Ansis finds a new distraction when Naiga, the Christian daughter of a local pharmacist, takes an interest in him. Unwittingly, Ansis finds himself caught in a love triangle.

Viesturs Kairišs’ tragicomic film The Sign Painter, charts Latvia’s turbulent history during WWII through the lens of Ansis. He is an insignificant individual, a mere bystander, trying to remain neutral but inevitably caught up in the sweep of history.

When the film begins, Latvia is under the nationalist dictatorship of Kārlis Ulmanis. But it is not long before it is occupied, in 1940, by the Soviets, followed in 1941 by the Nazis and finally reoccupied in 1944 by the returning Soviets. Ansis lives through it all, forced to repaint the signs in the town depending on the latest regime in power. The Nationalists believe “Green is the color of Unity,” the Soviets demand their signs be painted red and, with the arrival of the Nazis, the new color is black. Likewise, Freedom Street becomes Unity Street, which is renamed Stalin Street and then Adolf Hitler Strasse. Almost comically, every time a new regime takes over Ansis is forced to replace the bust of one dictator with that of his successor. 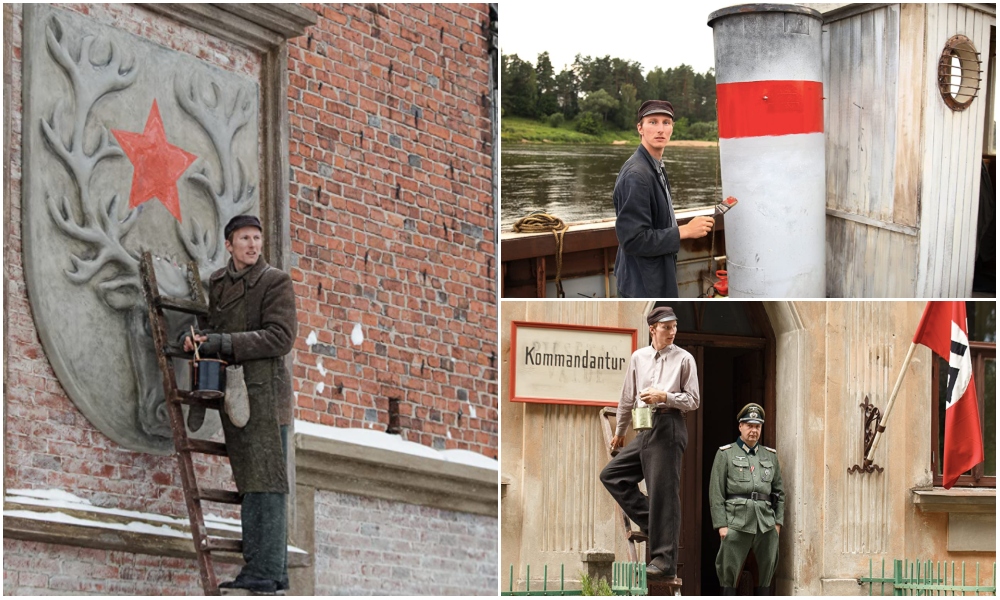 The film admirably illustrates how, under totalitarianism, people may initially only observe the facades of the new regime—superficial aspects such as the colors and signs. But dig beneath the surface and the truth starts to become clear. Through the microcosm of a fictional Latvian town, The Sign Painter deftly portrays people’s shifting loyalties both to one another and towards their Jewish neighbors.

When Zisele returns from Riga, she holds a position of authority with the newly arrived Communists, who nationalize her father’s store, murder Naiga’s father and banish trainloads of Latvians to Siberia. Ansis and Naiga only just manage to evade deportation thanks to a tip-off from Zisele.

The Nazis’ arrival prompts Zisele’s father to predict presciently that there will be “a river of blood.” The locals eagerly hunt down the town’s Jews, believing what they have been told by the Germans: “The goddam Jews made the deportation lists. Because of them, people were sent to Siberia.” As the local Jews are sent off to an unknown fate, even the town’s priest refuses to intervene, telling Ansis, “The church is not allowed to meddle with secular affairs.” With his new wife, Naiga, firmly favoring the Nazis, Ansis is thrown into a moral quandary—how far should he go to save Zisele?

Scenes of a joyous klezmer celebration serve as a poignant leitmotif to remind us of what is lost forever with the ending of Jewish life in Latvia. Influenced stylistically by artist Marc Chagall, the film’s director, Viesturs Kairišs, explains that he deliberately chose to frame much of the film at a slight tilt, to convey the notion that, through Ansis’ eyes, the world was “so deformed.”

The Sign Painter is based on a novel by Gunars Janovskis, who fled to Britain in 1944 when the Soviets re-occupied Latvia. Mr. Kairišs says that the book is unknown in his country because it deals with the embarrassing subject of Latvian collaboration with the Nazis during the Holocaust. It is only now, 30 years after the restoration of Latvian independence in 1990, that his compatriots are reflecting on their history and, as he rightly says, “we must find the courage to speak about our dark side.”

The film won four awards at the Latvian National Film Festival in Riga last November, including Best Actor for Dāvis Suharevskis (Ansis)—a noteworthy feat for someone who is not a professional actor—and Best Supporting Actress for Brigita Cmuntová (Zisele) as well as Best Screenplay (Viesturs Kairišs) and Best Sound.