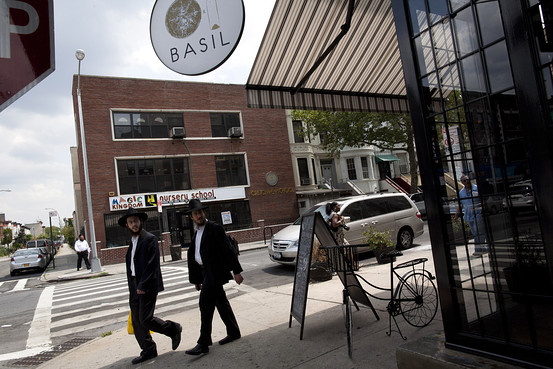 Hasidim and Hipsters can’t be friends, so says conventional wisdom.  But maybe they can eat together.  At least that’s what Danny Branover, principal owner of Basil Pizza and Wine bar in Crown Heights is hoping.

Crown Heights, the Brooklyn neighborhood perhaps most infamously known for the 1991 riots that irrupted between the neighborhood’s Hasidic and black communities, is home to a mix of ethnic and religious groups including immigrants from the Caribbean, Lubavitcher Jews, and African-Americans.  In recent years, an influx of young, liberal professionals have moved in adding yet another cultural and social imprint on the neighborhood.

According to a New York Times piece about Basil by Frank Bruni, former food critic for the Times, the idea for the restaurant started when Branover, himself a member of the Lubavitch movement, moved from Jerusalem to Crown Heights in 2001 and was dismayed by the lack of interaction between the neighborhood groups.  In Crown Heights he said, “Jewish and black residents were more estranged than the Jews and Arabs in Israel, who, have more profound political differences and much more reason to distrust one another.”  By establishing a restaurant where everyone, despite their religious and cultural differences, can feel comfortable, he hopes to change that dynamic. And it seems that he is succeeding.  According to Bruni, on any given night, the dining room is filled with Hasidic men cheek by jowl with bare-armed women and African-American politicos.

From its trendy certified Kosher menu (individual pizza, pasta, raw fish) to the diversity of the wait staff (gay, straight, male, female, Catholic) to the welcoming environment (it has been home to baptism parties and Hasidic jazz bands), it’s clear that the restaurant is trying its hardest to appeal to everyone.  But their efforts to be inclusive for some have also stepped on the toes of others.  Because Hasidic men aren’t allowed to hear female voices singing, for instance, recordings of female singers are never played in the dining room and waitresses are not allowed to sing Happy Birthday, even to non-Hasidic clientele.  One young woman who was kissing her boyfriend during dinner was admonished by the restaurant manager and told that she was in the Lubavitcher’s backyard and needed to “respect their ways.”  But Basil is now in the hipsters’ backyard as well and that, too, ought to be acknowledged.

Minor quibbles aside, the success of Basil proves that a multi-cultural, multi-religious restaurant in the heart of a historically troubled neighborhood is possible.   And that’s exciting.  As Joanna White-Oldham, one of Basil’s frequent customers, said  in the article, “the place makes such a great statement, especially at such a volatile time right now in our world, with all this lack of religious tolerance. And it has motivated me.”

Symi Rom-Rymer writes and blogs about Jewish and Muslim communities in the US and Europe.

Are We All Hasidim?

In a world in which any Jew is a potential target of anti-Semitism, it is the most visible Jews who are most threatened. Jews with black hats, with tight curls hanging down below their ears and black coats and women wearing modest head coverings, they are the most vulnerable. Jews in synagogues. In Brooklyn, as in Jersey City and Monsey, violence against individuals in their Hasidic communities is almost an everyday event. If someone wants to do harm to a Jew, Hasidic Jews and their communities are and have become easy targets.

END_OF_DOCUMENT_TOKEN_TO_BE_REPLACED

Facebook Twitter Pinterest linkedin Telegram
R. Justin Stewart may not be the first artist you’d expect to be behind a work called “Distorting (a messiah project, 13c).” The self-d...

END_OF_DOCUMENT_TOKEN_TO_BE_REPLACED

Facebook Twitter Pinterest linkedin Telegram
By Aarian Marshall Something’s afoot in the Park Slope Food Co-op. If you are not a local of bourgeois Brooklyn, if the New York Time...

END_OF_DOCUMENT_TOKEN_TO_BE_REPLACED

Not Your Bubbe's Punk Rock: An Interview with the Shondes

END_OF_DOCUMENT_TOKEN_TO_BE_REPLACED

Not Your Bubbe’s Punk Rock: An Interview with the Shondes

Facebook Twitter Pinterest linkedin Telegram
by Amanda Walgrove The Shondes is a Brooklyn-based indie band that has garnered attention for their gritty Riot Grrrl rock sound...