People sometimes assume that women don’t like to talk about aging—but that isn’t the case for Judith Viorst. The beloved author of Alexander and the Terrible, Horrible, No Good, Very Bad Day proves that it’s not only healthy but genuinely comedic to discuss aging. At 88 years old, Viorst doesn’t fail to remind us how fiercely funny she is in her appropriately titled poetry collection: Nearing 90 and Other Comedies of Late Life. The poet, children’s novelist and award-winning author has written one book for every decade of her life since 1968, even though she claims that publicly announcing her age every ten years wasn’t always her plan.

Nearing 90 not only tells stories about age; it tells stories about family, friendship and relationships—especially with her husband, Milton Viorst. In the book, she describes him as “a pain in the ass” while also insisting that she couldn’t imagine her life without him, instructing him “keep staying alive or I’ll kill you.” And true to the book, when I spoke with Judith on the phone Milton unknowingly butted into the call, as Judith chuckled, “Sorry, I told my husband ten times I’m being interviewed!” Unsurprisingly to those who have loved Judith Viorst for years, I laughed a lot, learned about the joys and challenges of getting older and, as someone who is nearing 20, also picked up some invaluable life advice.

Alexander and the Terrible, Horrible, No Good, Very Bad Day is one of your best-known books—and it was one of my very favorites growing up. Do you think that writing that book informed your later work?

Maybe eventually, but when I wrote it, it was just another children’s book and in fact, it had just been turned down by the people who were publishing my earlier two children’s books. We had trouble getting it published and then it took a long time to realize that it was making an impact and was going to sell a lot of copies and that the “terrible horrible” expression was going to become part of a common language. I had written a lot of books before, so it was clear to me it would be very successful. I don’t think it influenced me, but I certainly don’t get bored of hearing young women like you tell me it was your favorite book growing up; I love hearing that. We now have a son Alexander, who is 52 years old. I think he was about five when I read it to him in manuscript form, and he hated it. He thought I was giving him a bad day.

As a society, we expect women “nearing 90” to be very serious and not talk about grabbing sushi with friends or romance; but you do. Why do you think that expectation exists, and how do you feel about challenging it? 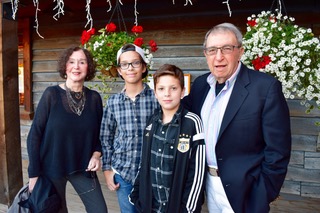 Viorst with her husband and two of her grandchildren (Credit: Marya Gwadz)

Forever, it was assumed that by the time you’re my age you’d be wearing a shapeless black dress, sensible shoes, and knitting and making chicken soup. It certainly isn’t the whole truth. My friends look good and care about how they look and are very vigorous and active people. And that doesn’t minimize the fact that we get aches and pains and my upper arms are no longer fit for public consumption, no matter how many barbells I lift. And as for being serious, of course we’re serious; but I don’t know how anybody could possibly get old without having a very well developed sense of humor. There is this thing called the Happiness Curve, a U-shaped curve that says we’re most happy when we’re young that then goes down down down and then the next time we’re really happy is now, right now. I do find that to be the case; I don’t need to be younger, I just need now to last for as long as I can get away with. Of course, this is within reasonable limits. People have devastating illnesses, they lose people they love and they know they’re going to die in the not too distant future. Having acknowledged that, we don’t want to spoil the sweet precious days that remain. So I think we’re grateful, we’re amused and we’re willing to take a certain significant responsibility for making our life good. You try not to get insulted if your daughter in law doesn’t want to go shopping with you, or if CNN doesn’t want your opinion on world events.

Although the book is very lighthearted, you’ve discussed some topics that can be more difficult—for example, the death of your father. Was it a cathartic experience for you to write this collection?

I was looking for a balance. I wanted to write a book that wasn’t going to depress the hell out of other people, because I wasn’t very depressed about being 90. I wanted to balance the humor with the realities of this time of life. I’m giving a talk about this book soon, and I’m planning on reading two poems about death, getting that over with, and then talking about life! So, I think I’m very professional in my writing—I don’t think I use it in a cathartic way. I was more thinking these things through and trying to balance the bodily decline with the “been there done that” and “I can handle it” attitude. I have one poem in there called “Attitude” which I think pretty much sums up where I’m at.

Once upon a time I twinkled.
Now I’m achy, creaky, crinkled,
Also slowed-down, sidelined, out of touch.
No stroke. No chemotherapy.
And (as of now) dementia-free.
What’s there to complain about? Not much.

How do you think the world has changed since when you wrote It’s Hard to Be Hip Over 30?

I still can’t get over how you can walk into a room and everybody is on their iPhone—there’s a feeling that people aren’t there, where they are. Their bodies are physically there, but their heads are somewhere else, and I think that’s a shame because I so value being where you are right here and right now, even if it’s noticing a cute guy mowing your lawn. Whatever you’re noticing, notice it. I think that’s a huge difference: a big illusion of friends and connection, when we still need to do that in person.

Maybe you haven’t noticed that bare-chested fellow,
That flat-bellied, slim-waisted fellow mowing the grass,
The one with the black curly hair, and the tattooed shoulder,
And the low-slung blue jeans lovingly molding his ass.
He’s bobbing his head to the music that streams through his earbuds.
He’s mouthing the words to some seethingly sensual song.
You think I’m out here on the porch just reading my novel?
You are so wrong.

How has your Judaism influenced your writing or played into writing Nearing 90?

I think that being Jewish for me has certain characteristics, one is using a sense of humor to get you through the good times and the bad times, a sort of ironic sense of humor, a could-be-worse kind of humor. I really do think that as a Jew, I have a highly developed capacity for worry and for guilt, and I think those are part of what I bring to my writing, particularly for worrying. If you go through my books of poems I’m worried in every single decade. It does not go away!

Do you have any major advice you’d give to someone who is my age: nearing 20?

Yes, put the damn phone away and zip up your purse and wherever you are and whatever you’re doing, be in it be with it. And for God’s sake, when you’re crossing the street with earbuds in your ear and your eyes glued to your phone, please notice that there’s traffic and cars are approaching you. Large trucks are about to run you down!

END_OF_DOCUMENT_TOKEN_TO_BE_REPLACED

How is my desire lost? It pours out of my body.