In 1993, my PR agency was launching a German company’s product and I was collecting the team at Montreal’s Dorval airport. Two men were arriving from Berlin. I spotted our Canadian distributor coming down the escalator. Seeing me, he gesticulated energetically, pointing out one of the Germans. The man was standing in front of me, his face in profile. For some reason, I reached out and touched his arm. He turned towards me and I instantly knew: he was The One I’d been waiting for my entire life.

But. I was 25 years married; he was on his third wife. I lived in Montreal; he in Berlin. I am the daughter of Holocaust survivors; he is a tall, handsome, debonair German. What a cruel cosmic joke!

We spent most of that evening talking to each other. I learned that Axel had lived all over the world: Lagos, Johannesburg, Barcelona, Santiago de Chile, and had traveled to every corner of the globe. We joked and teased and laughed. It felt as if we were simply catching up after a long separation.

Later, I joined the team for a drink. When the racy jokes began, something Axel wasn’t accustomed to, he grew rigid by my side until the piano man played some Latin rhythms. Axel rose and offered his hand.

I was terrified. My husband only ever managed a slow shlep at simchas. Reasoning that I’d embarrass either him or myself, I followed Axel onto the empty dance floor, imagining the worst. 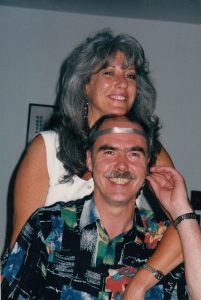 He took my hand in his and placed the other around my waist slowly, as if gathering a curtain, and held me firmly. As he moved with certainty, I followed, giving myself up totally. It was an incredible feeling, morphing into Ginger Rogers, floating like a feather. No one had ever led me like this. And then, the music slowed. Axel curled his palm until the back of my hand lay against his pounding heart, breaking the spell. I panicked. It was time to say my goodbyes.

He was gone the next day, an indelible memory. A month later, I faxed him a business letter. My final paragraph began, “It’s rare to meet a kindred spirit.”

He sent me a Christmas fax that year and the next. The third year, nothing. I was in the process of leaving my husband. Then, in March, Axel got in touch. He had business in Montreal; could we meet? 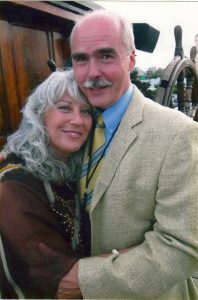 Over dinner, we sat ignoring a table laden with food, so engrossed were we in sharing stories. He was leaving wife number three. I asked what made him contact me after so much time? He pulled my first fax from his wallet, the folds worn thin.

“There was this line that began, ‘It’s rare to meet a kindred spirit,” he said. “That said so much more than I could hope for.”

I had found a man who could read between the lines and thus began our long journey. For two years, we met every few months in Europe or North America. We parted when he met someone new but we never really let go. I never doubted that he loved me. And I believed, without any reason, that someday he would return.

It took eight more years before my beshert and I came back together. And that’s where we’ll stay, forever. But that’s another story. 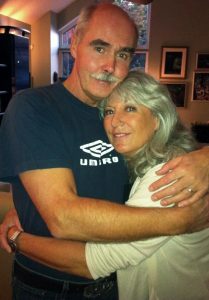 Gina Roitman and Axel Augustin met in 1993 and have been together since 2006. Axel, now retired, moved to Montreal in 2008 and became a Canadian citizen 10 years later. Gina is an author, poet, writing coach, and the subject of the award-winning documentary film, “My Mother, the Nazi Midwife and Me.” Axel is an amateur chef and a Formula One fanatic. Gina’s novel, Don’t Ask, will be released in the Spring of 2022. They live in the Lower Laurentians, north of Montreal.