Blumenthal’s father, Martin, fled Nazi Germany in 1935—a time when the architecture of the Holocaust was in its embryonic stages. Mobs of Nazi Brown-Shirts roamed the streets of the elder Blumenthal’s native Frankfurt. Like so many other refugees of all nationalities and religions, he was drawn to America as a beacon of liberty and tolerance.   — Dan Freedman

Virginia-based freelance photographer Lloyd Wolf was on the plaza outside the main entrance of the United States Capitol on Wednesday afternoon January 6 taking pictures when Trump supporters descended on the building. Wolf has documented many previous demonstrations, starting in 1973 in Washington, DC with Nixon’s second “counter-inaugural.” The experience on Wednesday, he says, was particularly disorienting and left him shaken and sad. He characterized the scene as treasonous madness—a protest and crazy circus that evolved into a “mob-ment.” —  Diane Bolz 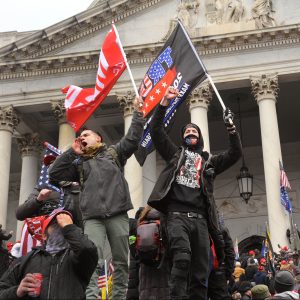 Two men waving flags on Capitol steps as others approach top of steps.

Robert Siegel on U.S. Capitol Riots: ‘It’s Like Nothing I’ve Seen Before’”

It’s like nothing I’ve seen before. Given that this took place in Washington, DC, and given that this was a crowd of people, a couple of whom carried Confederate flags, but who, for the most part, were wrapped in the Stars and Stripes with a sense of entitlement that this was their Congress to go in and break the windows of. I found it unlike anything I’ve seen.” — Amy E. Schwartz

Insurrection and Anti-Semitism Blend at the Capitol Riots

Often, it takes a traumatic event to unite a nation, and the January 6 storming of Capitol Hill was of a magnitude that could do just that. Across the country, Americans, regardless of background and political convictions, sat glued to their screens, watching in horror as an angry mob trampled symbols of democracy.

Hours later, as tense calm was restored to Capitol Hill, more stories and pictures from the chaotic scene flooded the airways and social media, and it became clear that American Jews had been hit twice: not only an attack on democracy but also a just-as-ugly display of anti-Semitism in its crudest form. —  Nathan Guttman