The Girl in the Photograph: The Face of the Polio Vaccine Trials Battles Another Epidemic

Marlene Kohn doesn’t remember much from that day back in 1954. She remembers waiting in line with her second-grade classmates at Colfax Elementary School in Pittsburgh’s Squirrel Hill. She remembers the boy in the class above her who fainted because he was so nervous. She remembers the excitement in the air.

But she doesn’t remember who administered the shot and why it mattered. Only later did she realize that the man giving her an injection to prevent polio, a highly contagious viral disease primarily impacting the nervous systems of children, was the creator of the vaccine himself, Jonas Salk. The moment was immortalized, however, in a photo depicting Salk injecting Kohn (née Siegel) while she turns her head away and is held by a nurse. This photograph would appear in countless newspapers and magazines as information and excitement spread about the potentially life-saving vaccine. Later, it would be featured in medical textbooks and Smithsonian Institution exhibits and even accompany Salk’s New York Times obituary. “This one shot has brought so much, not fame exactly, but it keeps recurring in my life,” says Kohn, now 74 and living in Miami, Florida.

Growing up, Kohn says, she didn’t think much about polio. She knew a few people who had been affected and some who had even died, but they weren’t part of her everyday orbit. Her mother, however, was fearful and worried about letting Kohn go to public pools and camps. She wasn’t alone. In the first half of the 20th century, parents were terrified of this disease, which could lead to paralysis or death. From 1950 to 1953, there were 119,000 cases of paralytic polio and 6,600 deaths, according to the Centers for Disease Control and Prevention. Parents, scared and unclear about how the disease spread, kept their children indoors.

Jonas Salk was one of many scientists searching for a way to stop the virus. As director of the Virus Research Laboratory at the University of Pittsburgh School of Medicine, he and his team created a vaccine composed of “killed” polio virus. In 1954, more than  650,000 children across the United States—including Kohn—participated in polio vaccine field trials in one of the largest clinical trials ever performed. On April 12, 1955, the results of the trial were announced and the vaccine was deemed a success.

Kohn recalls her mother calling up her pediatrician to see if she should take the vaccine. And when he said yes, she agreed. “I think people in the 1950s were more trusting,” Kohn says, in terms of science and medicine. “You believed, when Walter Cronkite came on the news, you believed what he said.” 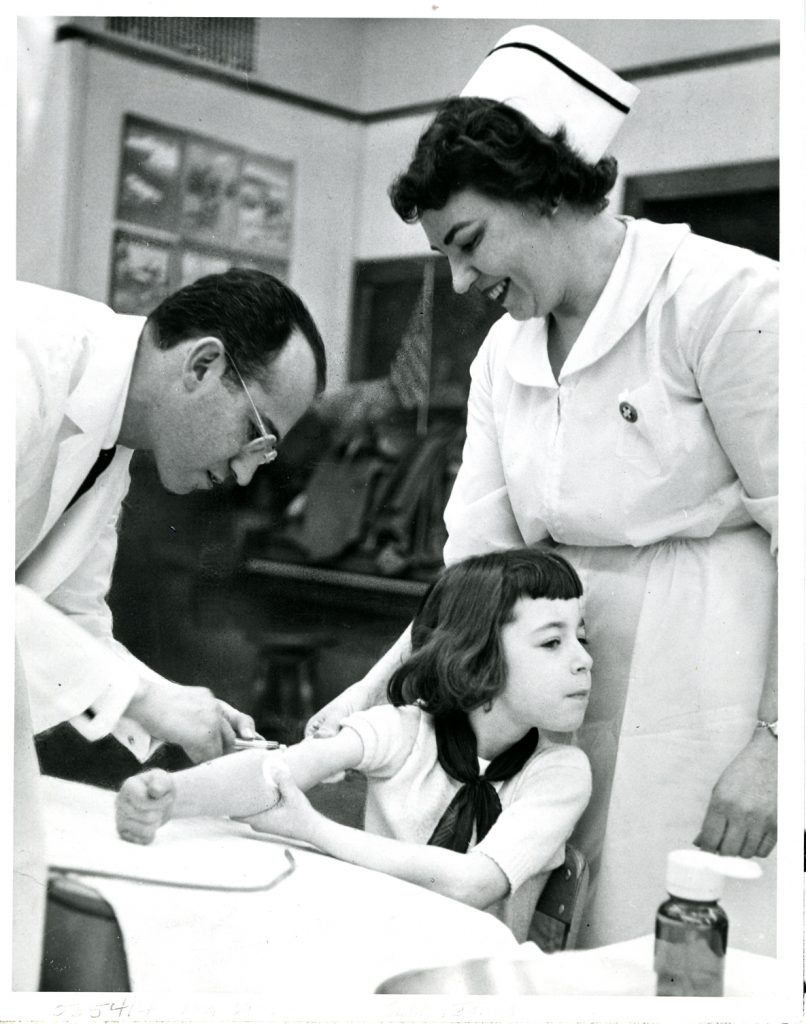 Kohn didn’t realize her photo was taken or that it was being distributed until her parents started receiving phone calls from family and friends who had spotted her in newspapers and magazines, including the now defunct Post magazine and Women’s Day. Her image usually accompanied an article explaining what the polio vaccine was and the importance of being inoculated. “In coming weeks, all first and second graders in the US will roll up sleeves, have their arms swabbed and pinched. Some won’t mind what comes next, others will, but for all there will be a big reward,” the caption under her photo in Picture Week read. “The reward they mean is being polio free,” says Kohn. The photo’s life extended beyond the vaccine rollout, appearing in medical textbooks and encyclopedias. “And a lot of medical journals,” says Kohn. “We have a lot of friends that are doctors and they always say, ‘I know that picture. It was in my textbook.’”

The photograph and its ubiquity made Kohn feel connected to Jonas Salk and the discovery of the polio vaccine.“Everybody in my family, when they have to do a biography, they always pick Dr. Salk. And then they bring in the pictures of me. So my children, nieces, nephews, everybody has used my story.” She adds: “Something that I didn’t think of, that meant nothing when I was seven, all of a sudden as an adult and the older I get, the more meaning it has.”

It also made her more determined to get the COVID vaccine. “I know so many people who don’t want to take the vaccine, unfortunately,” she says. But “I thought, well, I did the polio vaccine. I was a guinea pig for that. I’m going to trust the doctors, I’m going to take it.” So on January 5, she rolled up her sleeve yet again to receive an injection in hopes of stopping another epidemic. 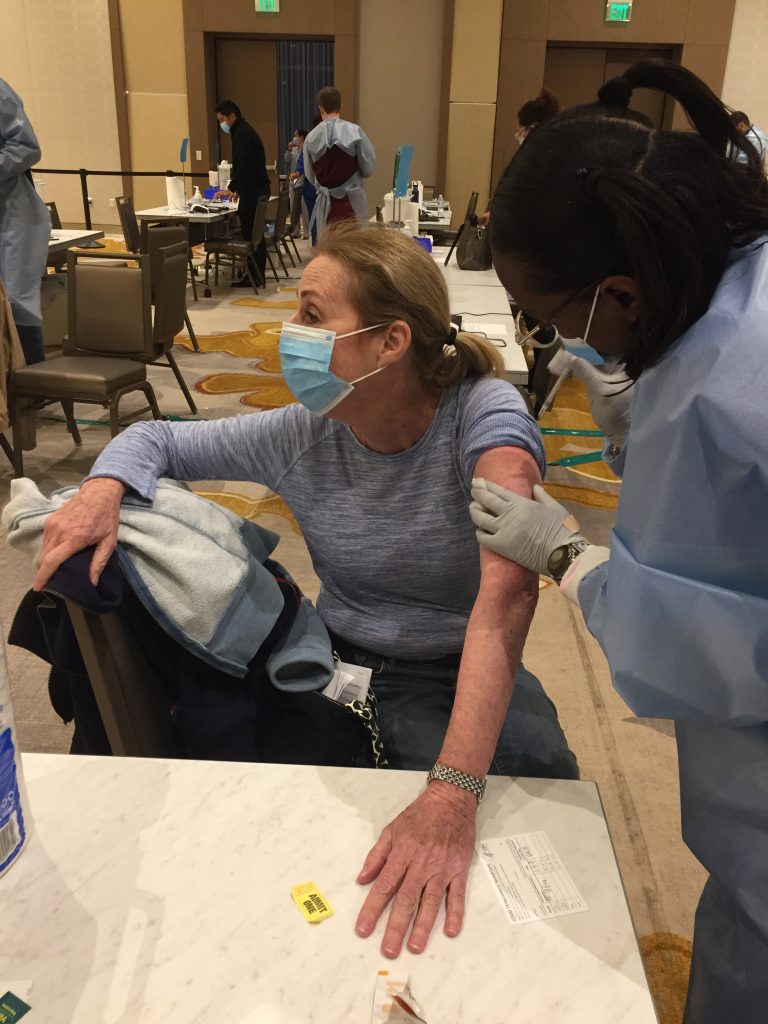 Kohn receives the first dose of the COVID vaccine on January 5, 2021.

2 thoughts on “The Girl in the Photograph: The Face of the Polio Vaccine Trials Battles Another Epidemic”