Steven Pinker, Leon Fleisher & Other Creatives Weigh In On Creativity & The Brain

What’s the connection between neuroscience and creativity? It was the question on everyone’s mind the evening of Sunday, November 24th at Moment Magazine‘s 2013 symposium dinner, which featured a fascinating panel discussion on the theme of creativity and the brain. Held at Washington Hebrew Congregation in Washington, DC, the event–an annual benefit for Moment and its Daniel Pearl Investigative Journalism Initiative–was attended by more than 300 guests, and highlighted five brilliant panelists: New Yorker cartoon editor Robert Mankoff, cognitive psychologist and author Steven Pinker, composer and pianist Leon Fleisher, philosopher and novelist Rebecca Newberger Goldstein and neuroscientist and sculptor Barton Rubenstein. Robert Siegel, host of NPR’s All Things Considered, moderated the conversation. Pinker pointed out the ambiguity behind the word “creativity.” “When we talk about creativity we’re a little hypocritical, because we don’t just mean creative in the sense that it’s unlike solutions that have been proposed before—they also have to work,” he said. “There are a lot of people who are creative in the sense of being innovative, but we don’t care about them because their contributions just aren’t very good. We say, ‘What do you think of Yoko Ono’s vocal stylings?’ ‘Well, it’s creative.’ It’s a kind of backhanded compliment or insult.” The panelists discussed the importance of distraction in the creative process. Rubenstein said, “My most creative moments are when I’m not creative. I do something else and I find a thunderstruck moment that comes to me, which is a moment in time. It does grow in me, but usually it comes in a moment. I’ve learned as a scientist that I don’t solve problems in science by staying an extra five hours in the lab–it was more walking the campus and appearing to be doing nothing, watching the construction sites of new buildings, that I actually solve the problems. Then I come into the lab and basically do the busy work of testing it.” Mankoff also discussed the importance of distraction–or boredom. “Boredom is actually a good thing,” he said. “I always see that as the gestation. The annoyance you feel that keeps building and building, and that frustration–things are happening, obviously things in the brain must be happening. Often you are bringing in all this stimulus and the truth is the idea just comes to you.” He also described the  value of persistence. “I’m in the Conde Nast elevator–fancy building, beautiful models, guys in fancy suits. This guy’s complaining, ‘They stole my idea.’ We’re on the twentieth floor, going down. ‘They stole my idea, they stole it.’ I don’t know the guy, but when we get to the bottom floor I said, ‘Get another idea.'” Leon Fleisher also emphasized the truth of the old saying, “Genius is one percent inspiration, 99 percent perspiration.” “Very near here, in the Library of Congress, is a sheet of paper–a manuscript of Beethoven’s Fifth Symphony,” Fleisher said. “We’re all familiar with the Fifth Symphony–the last movement has this theme of utter simplicity and yet utter power. Five notes. On this sheet of paper–you can go to the clerk there and ask to see it, and if he considers you trustworthy he’ll let you hold it in your hand–it’s a sketch sheet of Beethoven’s on which there are 19 other versions of that theme.” Goldstein discussed the difference between writing novels and studying philosophy, saying–after some deliberation–that philosophy was a more frustrating field. “What it is to be a philosopher is to spend your life thinking about questions that exceed our understanding and getting clearer and clearer about what we don’t understand, so you have to have a very high tolerance in frustration.” The evening also honored Ambassador Stuart Eizenstat with the 2013 Moment Magazine International Humanitarian Award. Ambassador Eizenstat played a prominent role in helping to create the German Foundation Initiative during the Clinton Administration. He has led international efforts to provide belated justice for victims of the Holocaust, negotiating major agreements with several European nations for the restitution of property, payment for slave and forced laborers, recovery of looted art, bank accounts and payment of insurance policies. He is the author of Imperfect Justice: Looted Assets, Slave Labor, and the Unfinished Business of World War II. German ambassador Peter Ammon received the 2013 Moment Magazine Ambassador Award. Ambassador Ammon has pioneered efforts to promote Jewish-German understanding. Want to hear more of the fabulous conversation? Download the ebook for the entire transcript. Audio file to come soon. 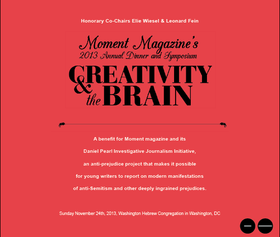