Conversion to Judaism as Proof of Lunacy? The Strange Story of Warder Cresson

In late October of 1860, Michael Boaz Israel ben Avraham, a leader of Jerusalem’s Sephardi community, was laid to rest in the Jewish cemetery on the Mount of Olives, with the honors due a rabbi. An unremarkable event, it would seem—until one learns that the honored luminary was born neither Sephardi nor Jewish.

As the “ben Avraham” attached to his name indicates, Michael Boaz Israel was a convert to Judaism. He was born in 1798 as Warder Cresson, into a well-established Philadelphia Quaker family. Yet his rather remarkable career led him to serve—at least technically—as the first U.S. Consul to Jerusalem. He was also the subject of a landmark public trial testing the claim that his conversion to Judaism was, in and of itself, proof of insanity and grounds for commitment. 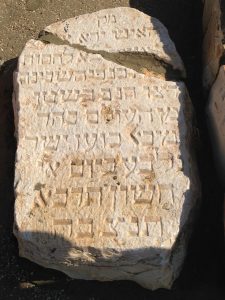 Cresson’s grave on the Mount of Olives

The America in which young Cresson came of age was one of tremendous religious ferment, the period of the Second Great Awakening (the First had been in the 1730s-1740s). Evangelism swept the land; new religions and self-proclaimed prophets appeared in dizzying succession: Shakers, Mormons, Seventh-Day Adventists, Campbellites and other since-forgotten sects. Many movements shared an outlook known as Restorationism, looking to the restoration of Jews to the Holy Land as fulfillment of Biblical prophecy and the key to apocalyptic visions of the Final Judgment. Of course Jews in this vision (as in its contemporary counterparts) would have to convert to Christianity in order to share in salvation. But in the meantime, Restorationists became lively proto-Zionists long before the Jewish Zionist movement existed.

By the early 1840s Cresson had become a successful, fairly well to do, farmer just outside Philadelphia. He had also dabbled in several of the new sectarian options, to the dismay of his Quaker family and community. But he was drawn increasingly to Judaism, coming into contact with Rabbi Isaac Leeser of Congregation Mikveh Israel in Philadelphia, an important Jewish leader of his time. Cresson was an intense student of the written word; already in 1830 he had published his first work, a broadside against contemporary Christian failings entitled Babylon the Great is Falling! Like most devout Christians, Cresson read the Old Testament (that is, the Jewish Bible) closely; unlike most, he came to feel that it was definitive and superseded the Christian scriptures that came later.

So while Cresson embraced the goal of the Ingathering of the Exiles, he rejected the attendant notion that this required Jews to convert to Christianity. What remained was to put his beliefs into practice. The Ottoman Empire was in decline, and Western penetration of its Palestinian provinces was proceeding apace. Western powers had forced the Ottoman Sultan to let them open consulates in Jerusalem, something forbidden since the Crusades. Cresson, through his Philadelphia connections, applied for and received a letter of appointment as the first U.S. Consul, ever, in Jerusalem, volunteering to serve without pay.

In Cresson’s words, “In the spring of 1844 I left everything near and dear to me on earth. I left the wife of my youth and six lovely children…and an excellent farm, with everything comfortable around me. I left all these in the pursuit of truth, and for the sake of the Truth alone.” How did Cresson adapt to the poverty and desolation of 1840s Jerusalem, as described by all visitors? The English author William Makepeace Thackeray, on his way through in late 1844, reports seeing the new American Consul-General and hearing from him that “he expects to see the Millennium in three years.”

Actually, Cresson was deceiving Thackeray about his official role, since a letter cancelling his consular appointment had been waiting for him upon his arrival. Nonetheless he remained in Jerusalem, seeing around himself clear evidence of the authenticity of the Old Testament and the inconsistencies of the New Testament. Finally, he completed the passage: “I remained in Jerusalem in my former faith until the 28th day of March, 1848, when I became fully satisfied that I could never obtain Strength and Rest, but by doing as Ruth did…I was circumcised, entered the Holy Covenant and became a Jew.”

Full of enthusiasm, Cresson returned to Philadelphia in September of the same year, eager to bring his family into the new Covenant. But his wife, who had become Episcopalian during his long absence, was unimpressed. Furthermore, as Cresson had left a power-of-attorney with her, he soon found himself dispossessed of much of his property. He was forced to leave home and find refuge with a Jewish friend. Most ominously, his wife and most of his family, claiming that Cresson was clearly out of his mind, lodged a charge of lunacy and obtained a verdict of insanity from a Sheriff’s jury.

Cresson appealed the verdict and remained unconfined pending trial, which took place two years later, in May 1851. The family’s lawyers claimed that Cresson had said he wanted to rebuild the Temple in Jerusalem and that he “attempted by violent means to compel his wife and children to embrace the Jewish religion.” Cresson denied that he had spoken of rebuilding the Temple—after all, the site was in Turkish hands—and called 73 witnesses in his own defense. Cresson’s lawyer argued that the basis of the lunacy claim was what would today be called anti-Semitism: “To dare embrace Judaism was something beyond…comprehension, a thing unheard of; thus endeavoring to stigmatize the venerable faith of Israel.” In his charge to the jury, the judge instructed them not to take religious beliefs into account in determining whether Cresson was insane. 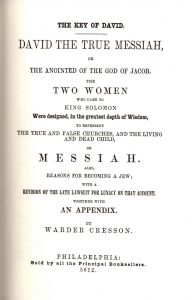 Accordingly, the jury took very little time to declare Cresson sane. The case was widely publicized at the time and the outcome was applauded by most major newspapers. It is considered a landmark in the defense of religious liberty.

Cresson, unsurprisingly, divorced his wife. He quickly returned to Jerusalem, marrying a woman in the Sephardi community and fathering two children (neither survived beyond childhood). In 1852 he published his major work, The Key of David, arguing that the Messiah had already come and was in fact none other than King David. In his later years he tried to further pre-Zionist Jewish settlement by building an agricultural colony in the Valley of Refaim, the area later developed as Jerusalem’s German Colony. But it appears that he was never able to raise the necessary funds.

When Herman Melville visited Palestine in 1856, he met Cresson and immortalized him in the long-winded (and seldom read) epic poem “Clarel: A Poem and Pilgrimage in the Holy Land,” as the Christian-turned-Jew Nathan:

Nay, and turn Hebrew? But why not?
If backward still the inquirer goes
To get behind man’s present lot
Of crumbling faith: for rear-ward shows
Far behind Rome and Luther: what?
The crag of Sinai.

Cresson’s tomb—or rather that of Michael Boaz Israel ben Avraham—was rediscovered on the Mount of Olives in 2013.