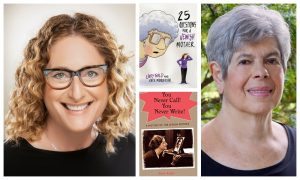 The Jewish mother has long been a staple of Jewish comedy: Overbearing, judgmental, inflexible, and inescapable. For veteran stand-up comedian Judy Gold, however, turning Jewish motherhood into a shtick actually is an act of love and reverence. “I never felt unloved,” Gold said in a recent Moment Magazine Zoominar. “It wasn’t coming from a bad place. The humor was coming from the fact that yes, she was overbearing. Yes, she said hysterical things. I didn’t even have to write material when she was alive. When you’re that much a presence or a factor that can’t be ignored, you’re fodder for material.” Gold, 58, channeled work on the Rosie O’Donnell Show into two daytime Emmys and a career in comedy. In addition to comedy specials on HBO, Comedy Central and LOGO, she was the star of two well-received Off-Broadway shows: The Judy Show – My Life as a Sitcom, and 25 Questions for a Jewish Mother. Her hit podcast is Kill Me Now and her latest book is Yes, I Can Say That: When they Come for the Comedians, We Are All in Trouble.  Joining Gold in the Zoominar conversation was Joyce Antler, professor emerita at Brandeis University and author of many books including You Never Call! You Never Write! A History of the Jewish Mother.

Gold grew up loving the Jewish women comedians of the era, especially Joan Rivers and Totie Fields. But her own comedic awakening occurred as a student at Rutgers University in New Jersey in the 1980s. Gold gained a reputation as being funny. So on a dare, she agreed to do 10-minutes worth of stand-up for Secret Santa. She spent two days writing jokes about everyone on the floor. At showtime, “I got a high from that first laugh like I had never gotten from anything ever,” she recalled. “It was like an out-of-body experience. That feeling is like no other and I loved it.” But the comedic life was not all fun and games. Travel, lonely hotel rooms, grimy basement clubs with not-always-friendly clientele – these are the stark realities of stand-up existence. But misgivings washed away once the lights shined on Gold onstage, she said. And a Jew doing stand-up yields the unlikely side-benefit of humanizing Jewish life to an audience that may know very little about Judaism. “We speak truth to power!”

From the start of her career in the ‘80s to the present day, Gold has had to battle a kind of tokenism that still exists in the male-dominated comedy realm. “When there are three guys on a comedy show, it’s a comedy show,” she said. “When there are three women on a comedy show, it’s a special event, ladies’ night out.” Women comedians have long paid a price in lost networking opportunities. Male comedians parlayed success into TV shows, movies and the like. “They would bring all their guy friends along,” Gold said. “And this just didn’t happen for us.”

In the beginning, at 6’2” with a long frizzy mane, Gold was under pressure from managers to change her looks, straighten her hair, dye it blonde. “It took me 20 years to be like, you know what, no,” she said. “This is who I am and I am so proud. I love being a Jew. I love it and I’m going to tell the world and I don’t care.” Gold is not the first to link the long history of oppression of Jews to the Jewish sense of humor, with the Jewish mother as the frequent focal point. “If you were kicked out of every country, every generation, like hello … You’d be naggy too!” Once Gold proved successful, her mother got to appreciate her own role as a foil. “How did we do?” she would say on the phone after Gold’s performances. Once Gold asked her mother what she would have liked to do had she not had children. “What you do,” her mother replied.

Pointing out that America is one of the few nations to send comedians overseas to entertain troops, Gold said comedy and laughs are appropriate in any setting and can lighten any burden, even when sitting shiva. Comedy doesn’t lessen the pain, “it acknowledges it – it’s how we cope,” she said. “And I think a world without laughter is not a world I’d like to live in.”

Sign up for Moment’s upcoming Zoominars—and watch all our past events—here!

The New Year of the Woman

More women are running for major political office than ever before.

END_OF_DOCUMENT_TOKEN_TO_BE_REPLACED

Facebook Twitter Pinterest linkedin Telegram
by Amanda Walgrove As she’d be the first to joke about, Joan Rivers has tough skin. While her 2010 documentary, Joan Rivers: A Piece...