“The war raged on and I sat there by the sea and looked deep into the heart of humanity. I became my mother, my grandmother, in fact I was all the characters who take part in my play. I learned to travel all their paths and became all of them.”

Charlotte Salomon was born in 1917 in Berlin to a cultured, prosperous and assimilated Jewish family. Her father was a respected professor and surgeon. Her mother was a nurse. When Charlotte (called Lotte by her family) was eight years old, her mother died. At the time she was told the cause was influenza—the truth was kept a carefully guarded secret.

In 1930 Salomon’s father married opera singer Paula Lindberg, whom the quiet and withdrawn young Charlotte came to idolize and love. Charlotte also formed a key relationship with her stepmother’s voice coach, Alfred Wolfsohn, a dynamic man almost twice her age. As conditions in Berlin became more threatening for Jews after Kristallnacht in November 1938, the Salomons decided to send Charlotte to the south of France to join her maternal grandparents, who had been living in Villefranche-sur-Mer for several years. They were there thanks to the generosity of a wealthy American acquaintance, Ottilie Moore, whose villa sheltered a number of refugees from the Nazis. The plan was for Charlotte to eventually meet up with her parents and journey to America. 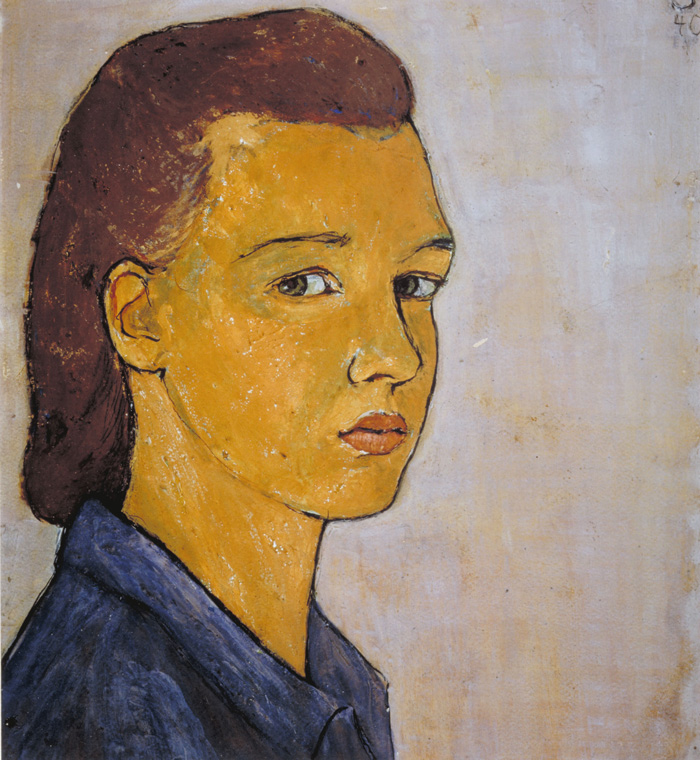 Charlotte Salomon was 23 when she painted this self-portrait in 1940.

After war broke out in the fall of 1939, Charlotte’s grandmother attempted suicide. It was then that the family’s history of depression and suicide was revealed to Charlotte by her grandfather. Her maternal great-grandmother, her aunt Charlotte, after whom she was named, and, in fact, her mother had all taken their own lives, as had several other family members. Despite Charlotte’s intervention, her grandmother died in a subsequent suicide attempt. “Dear God, just let me not go mad,” Salomon wrote.

To stave off the depression and despair wrought by the haunting legacy of this family history and the burgeoning Nazi threat, Salomon, who had studied art at the prestigious State academy of arts in Berlin, undertook, in her words, a “totally wild project.” In a letter to her father and stepmother she declared, “I will create a story so as not to lose my mind.” From 1941 to 1943 she obsessively threw herself into producing a series of more than 1,300 gouaches (opaque watercolors), some 769 of which she numbered and collated into a unique opus—a work of art that merged images, text and musical cues into a remarkable dramatization of her life story. Sometimes forgoing food and sleep, she often sang or hummed as she worked. “She had to vanish for a while from the human plane and make every sacrifice in order to create her world anew out of the depths,” she writes of herself in the third person. She titled her work “Leben? Oder Theater? Ein Singespiel” (“Life? or Theater? A Song Play”) and dedicated it to Ottilie Moore. When it was finished, Salomon packaged up the hundreds of paintings and text overlays, marked the parcels “Property of Mrs. Moore” and left them with a friend, the local doctor in Villefranche, telling him to keep them safe, “C’est toute ma vie” (“It’s my whole life”). Moore herself had returned to America in 1941 with several orphans in tow. 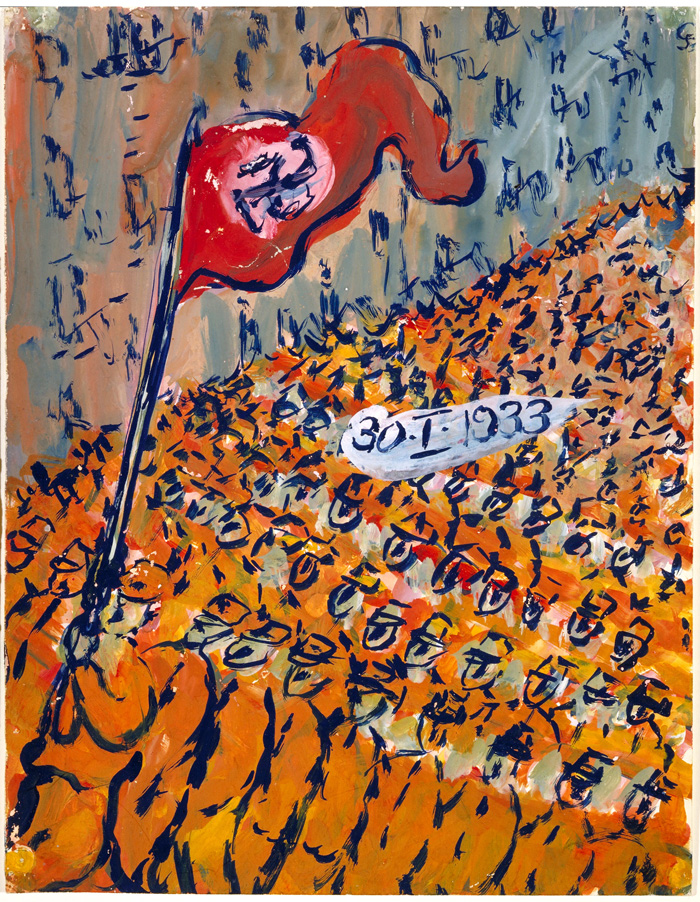 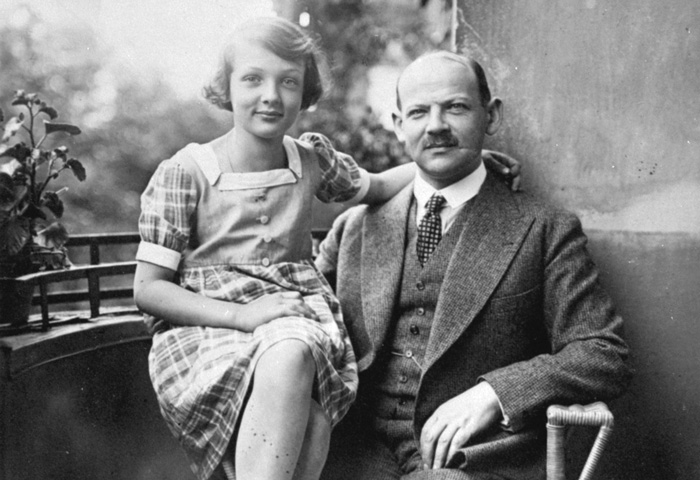 Top: Salomon reflects on the Nazis’ 1933 rise to power. Bottom: Charlotte, age 10 in 1927, with her father, Albert, a distinguished surgeon who was the first to detect breast cancer with an X-ray.

In 1939 Salomon’s father and stepmother had fled to Holland, where they were imprisoned for a time in the Dutch camp of Westerbork. They managed to escape and, with the help of the underground, spent the rest of the war in hiding.

Charlotte married Alexander Nagler, a Jewish refugee from Austria who had also been taken in by Moore, in 1943. Shortly after their marriage, the couple were arrested by the Nazis and sent to Auschwitz. Charlotte was put to death immediately upon her arrival—she was 26 years old and about four months pregnant. Nagler died soon after. Salomon pictures her mother’s suicide—a jump from a third-floor window—and writes: “There is nothing more to be done about the tragedy.”

In 1947, the Salomons traveled to Villefranche and contacted Moore. The village doctor had turned over the packages Salomon had given him to Moore when she returned after the war. Moore, in turn, gave the paintings and texts of “Life? or Theater?”—still in its original packaging—along with a self-portrait by Charlotte, to the Salomons. They had had no idea the work even existed. In 1971 they donated the entire oeuvre to the Jewish Historical Museum in Amsterdam.

Over the years a number of exhibitions have featured portions of Salomon’s work. Now, however, for the first time the complete “Life? or Theater?” is on display at Amsterdam’s Jewish Historical Museum in a special exhibition marking the 100th anniversary of the artist’s birth. With their vivid color, energetic execution and insightful commentary, the 769 notebook-sized gouache paintings and texts that make up the work bring Salomon to life. 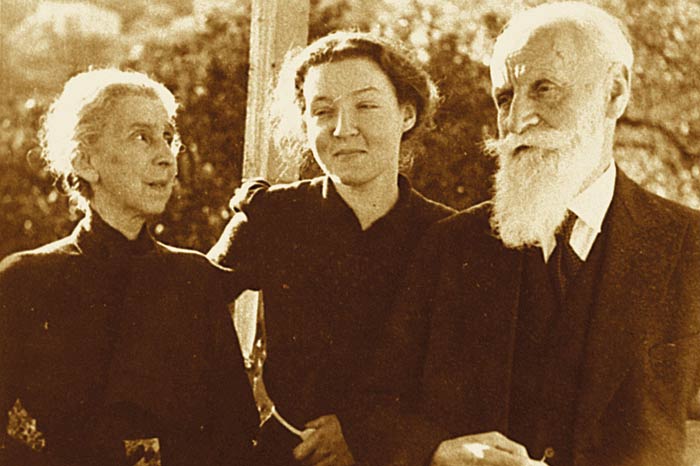 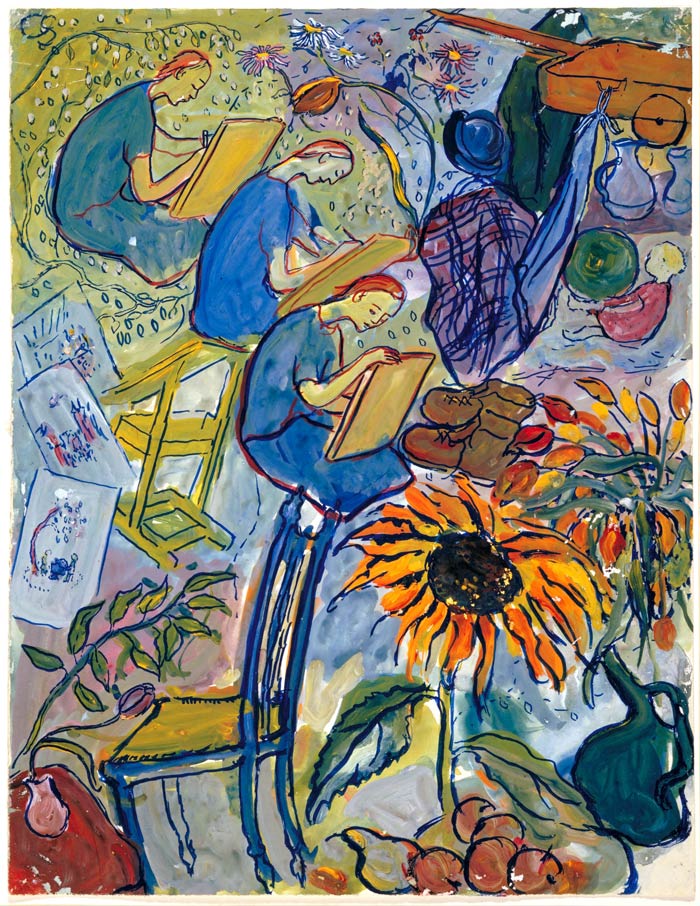 Top: Charlotte poses with her maternal grandparents in 1939 in Villefranche-sur-Mer, where they sought refuge from the Nazis. Not long after, her grandmother killed herself and Charlotte learned, for the first time, about her family’s tragic legacy of suicide. Bottom: Charlotte had studied art in Berlin. “Perhaps I could learn to draw,” she wrote, “that might be just the thing. Perhaps I could learn to draw, I’d really have a fling!”

The exhibition, which is on view through March 25, proceeds like a storyboard for a film. Images and text repeat, and fact and fiction blend, as do memory and imagination. Sometimes serious, sometimes satirical, always observant and introspective, the work recasts her life as a painted drama. Spontaneity and a sense of urgency animate the paintings, which are filled with almost cartoon-like action and dialogue. At once journal, theater, visual art and operetta, it is replete with classical music cues—Bach, Bizet, Beethoven, Mozart. Salomon takes considerable artistic license in representing people and events, and she plays multiple roles, acting simultaneously as artist, director and narrator. There are echoes of Van Gogh, Chagall, Munch and others, and a foreshadowing of the graphic novel and of installation art.

Included in the package containing “Life? or Theater?” was a 35-page painted letter from Salomon addressed to  Wolfsohn, who had wielded great influence over her as a young girl. In the letter she describes his role in inspiring her opus. He had impressed on her that only by exploring the dark side of life—death—could she fully understand her own existence and love life fully. The letter also contains a startling confession. In February 1943, she wrote, she had poisoned her grandfather, creating an ink portrait of him as he died. “I knew where the poison was,” she stated. “It is acting as I write. Perhaps he is already dead now. Forgive me.” For years the Salomons kept the precise contents of the letter secret, holding back the incriminating pages from the material they gave to the Jewish Historical Museum. The full contents have only become public in recent years. 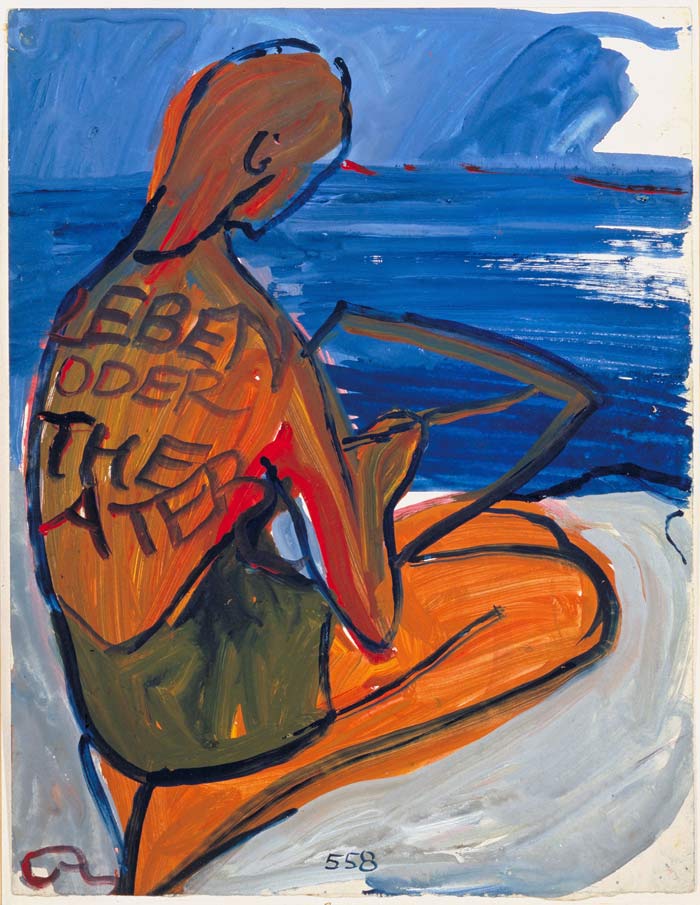 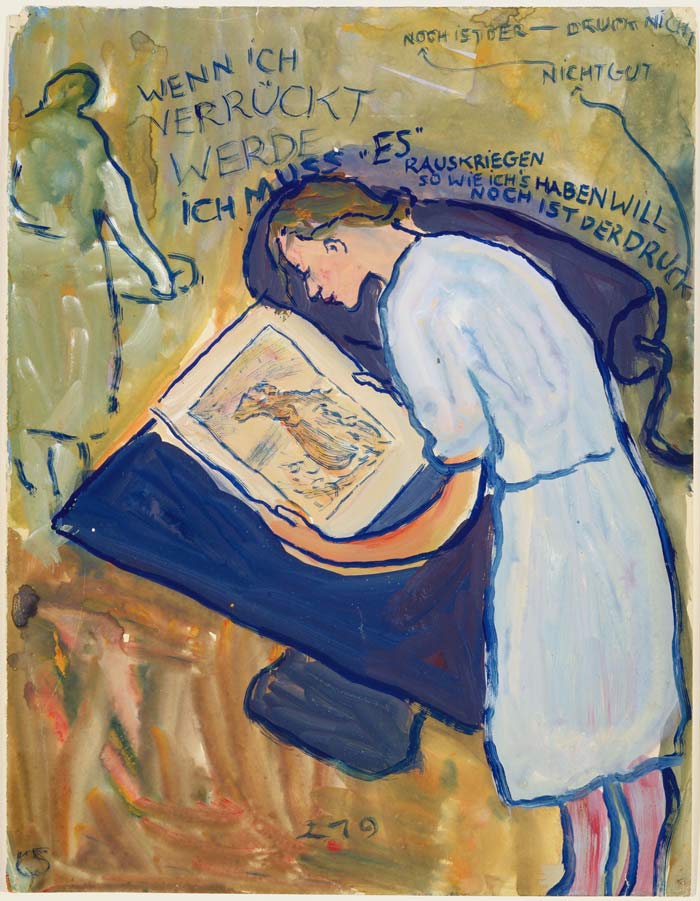 Top: Charlotte closes her opus with this painting—the words read: “Life or Theater?” Bottom:“Even if it drives me out of my mind,” Charlotte writes here, “I have to get it the way I want it. The print still isn’t right.”

A couple of clues to Salomon’s motive can be found in “Life? or Theater?” In a painting depicting the characters that represent Charlotte and her grandfather, the caption reads: “Charlotte: ‘You know, Grandpa, I have a feeling the whole world has to be put together again.’ Grandfather: ‘Oh, go ahead and kill yourself and put an end to all this babble!’” In an earlier passage, Charlotte refers to spending a few days in a railway car crammed with thousands of people and her grandfather. The text reads: “I’d rather have ten more nights like this than a single one alone with him.” In another entry she pens: “A little love, a few laws, a little girl, a big bed. That’s life and those its joys.”  In her letter of confession, she writes: “Everything I did for my grandfather drove blood to my face…I was sick. I was constantly beet-red from mute rage and grief.” As Salomon’s French visa depended on being her grandfather’s caretaker, she was, it seems, trapped. Perhaps she felt her only chance of survival lay in his death. Ironically, she chose life. Some eight months later it was cut short. 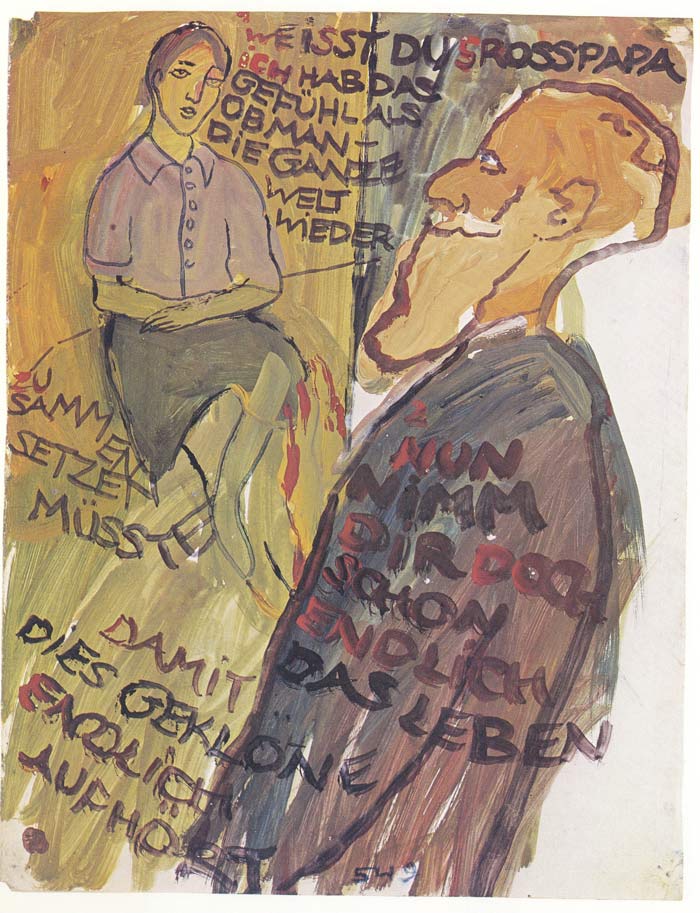 This image depicts a conversation between Charlotte and her grandfather—“You know, Grandpa,” Charlotte says, “I have a feeling the whole world has to be put together again.”

END_OF_DOCUMENT_TOKEN_TO_BE_REPLACED

It’s one of the more unsavory parts of the Bible. Lot, after the destruction of Sodom, is seduced by his two daughters, who think they are the world’s sole survivors.

END_OF_DOCUMENT_TOKEN_TO_BE_REPLACED

Facebook Twitter Pinterest linkedin Telegram
Does the rooster’s crow cause the sunrise? The answer seems obvious, if you’re a human—but a machine can only understand that the roost...

END_OF_DOCUMENT_TOKEN_TO_BE_REPLACED

n the 1946 film The Big Sleep, based on the Raymond Chandler mystery of the same name, Carmen—the promiscuous, drug-addicted younger sister of Lauren Bacall’s character—sizes up Philip Marlowe, played by Humphrey Bogart, and asks him, “What are you, a prizefighter?” Bogart responds, “No, I’m a shamus.” “What’s a shamus?” she inquires. “It’s a private detective,” he answers. Yes, Bogart is using the Yiddish version—more popularly spelled “shammes”—of the Hebrew word, “shamash.”

END_OF_DOCUMENT_TOKEN_TO_BE_REPLACED

The Not-So Lost Cause of Moses Ezekiel

The Jewish Sculptor’s Confederate Statues Have Become a Beacon for White Supremacists.

END_OF_DOCUMENT_TOKEN_TO_BE_REPLACED

Facebook Twitter Pinterest linkedin Telegram
Films You Shouldn’t Miss By Isaac Zablocki A notable theme that emerged from the film festival lineups was movies about the Orthod...

END_OF_DOCUMENT_TOKEN_TO_BE_REPLACED

When Alfred Moses, an attorney and prominent national Jewish leader, traveled behind the Iron Curtain to Romania in 1976, the impoverished country was under the thumb of the ruthless and corrupt dictator Nicolae Ceausescu. The trip changed Moses’s life, inspiring him to fight for the freedom of Romania’s Jews.

END_OF_DOCUMENT_TOKEN_TO_BE_REPLACED

Poem: The State of Things

Facebook Twitter Pinterest linkedin Telegram
On the day after Yom Kippur, I ride my bike along the waterfront. Pious men build their sukkah before sunset. Will they invite me to ...