At 81, a Greek Holocaust Survivor Looks Back

One year ago, in January 2018, Israeli President Reuven Rivlin and Prime Minister Benjamin Netanyahu met Prime Minister Alexis Tsipras of Greece in Thessaloniki to lay the cornerstone for a Holocaust museum. More than 70 years after the end of the Second World War, they planted two olive trees next to the old railway station, where 55,000 Greek Jews were forced to board transports to German extermination camps, most to Auschwitz-Birkenau. Barely 5,000 survived. Few chose to return to Greece. Since the dedication of the cornerstone, vandals have tried at least three times to halt construction of the country’s first holocaust museum.

Albert Levis, now 81, is one of the survivors. He was barely three years old in October 1940 when Fascist Italy invaded Greece. The German Army followed in April. By the end of the month, Greece had surrendered.

“What are your earliest memories of Greece?” I ask.

He does not hesitate. “Running and hiding with my mother,” he says. “Hiding and running.”

When I meet him, the spring morning is unseasonably cool and there’s still snow on the ground, but a fire in the massive stone hearth warms the Wilburton Inn’s Victorian parlor. He settles into a cushy armchair. The heat from the fireplace tints his cheeks pale pink, lending his complexion a boyish glow that belies his white hair and beard. He has the erect bearing of a man many years his junior. His voice is firm. Just the hint of an accent hides in his words as he recounts his life’s journey from Athens to Manchester Village, Vermont, where he makes his home at the family owned and operated Wilburton Inn.

It was a dangerous time, especially for Jews, and the Levis family were Romaniote Jews. Romaniotes date back to the Byzantine era; they have lived in Greece for more than 2000 years. The oldest Jewish group on the European continent, Romaniotes have their own language and customs. During World War II, 81 percent of the Jewish population of Greece was murdered, between 70,000 and 80,000 people—including Levis’s father and grandfather. Levis and his mother “miraculously survived the persecution in hiding by assuming Christian names,” he says.

The end of the war did not bring peace to Greece. Levis attended school during the Communist Civil War from 1946-1949. Exploring the conflicts of World War II, which he experienced as a child survivor of the Holocaust, has been his lifelong research project. In high school his essay on the history of the diaspora won the graduating class’s top prize. At the University of Zurich, Switzerland, he says, “My search for meaning expanded from the Jewish Holocaust to the universal state of devastating cultural conflicts.”

He traveled to Chicago for medical school and then to New Haven for his residency in psychiatry at Yale. He writes that psychology with “the Science of Conflict Resolution…can help to heal the person and heal the world.” In Connecticut, Levis fell in love with a vivacious American woman, Georgette Wasserstein. Her younger sister, Wendy, would years later write a Broadway play, The Sisters Rosensweig, about three Jewish-American sisters in London. In 1993, Madeline Kahn won a Tony for Best Actress as Dr. Gorgeous, the leading role inspired by Georgette. A playbill from The Sisters Rosensweig now decorates a corner of the Wilburton parlor.

In 1987, Levis and Georgette were celebrating his 50th birthday dinner at the Wilburton when he learned the inn was for sale. A Midwestern industrialist had built the 25-room Tudor mansion as a summer home at the turn of the 20th century. Since then, the 30-acre estate has had many incarnations. Levis bought it from RKO Film Studios. Hollywood stars sometimes used the inn as a discrete hideaway, according to Levis’s daughter, Melissa.

Having acquired the property, Dr. Levis nailed a mezuzah to the doorpost and installed a sculpture park on the grounds. Monumental statues depict a journey through the Bible. “It was a family project,” he explains, “meant to educate my daughter Tajlei upon her bat mitzvah.” The sculpture park at the inn was the beginning of The Museum of the Creative Process, the first of three Vermont museums Levis founded. Reader’s Digest recently named it as the best free thing to do in Vermont. 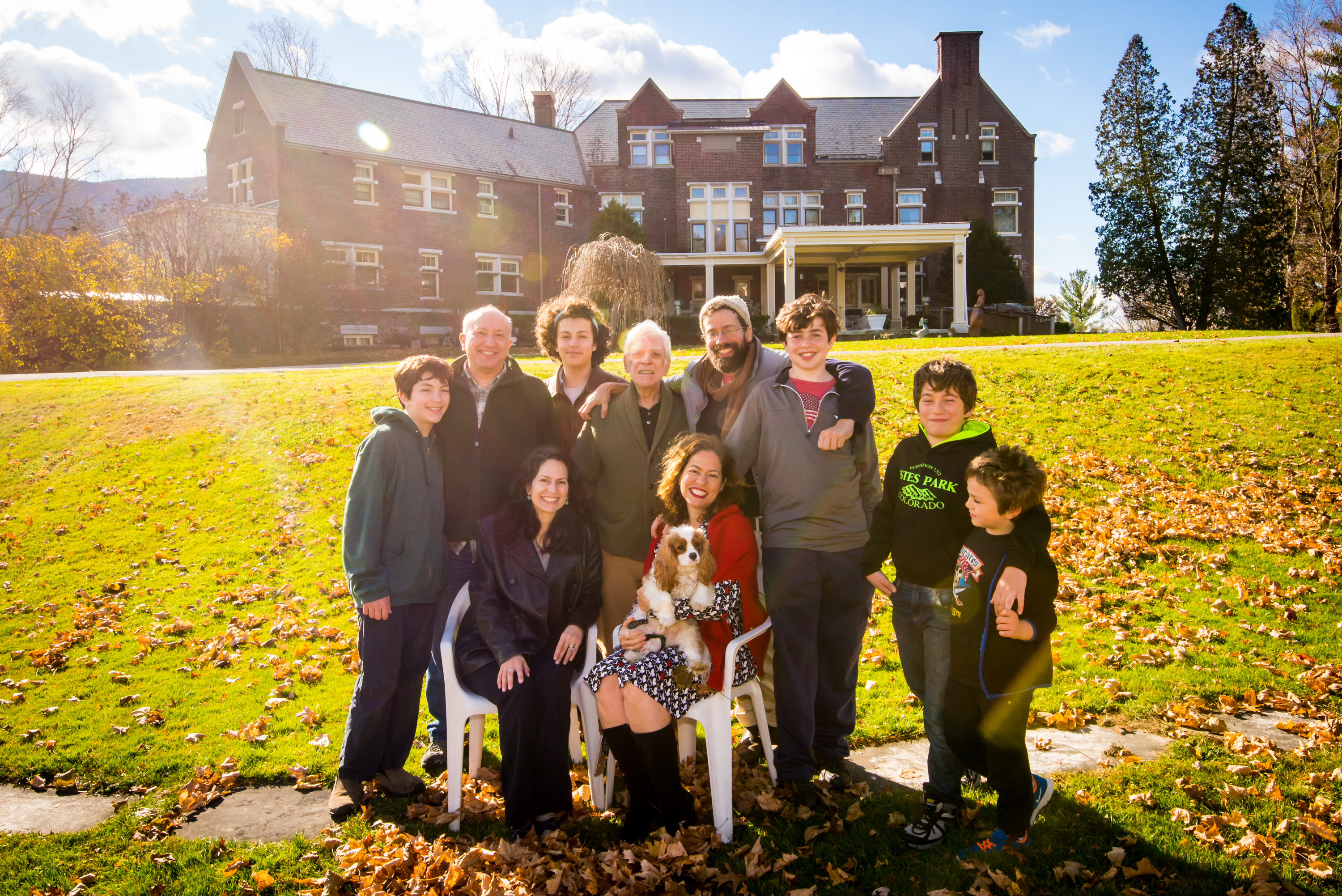 Levis with his family at the Wilburton Inn (Credit: Melissa Levis)

A multilingual renaissance man, knowledgeable about politics, music, art and literature, Levis believes that creativity may provide insights for analyzing and resolving conflict. He refers to Bible stories and ancient myths from many cultures to illustrate his thesis. He often compares the Greek myth of Prometheus stealing the fire of the gods to the conflict between science and religion. He proposes a “moral science.”

Today, Levis and his four adult children manage the Wilburton Inn, where he conducts conflict resolution workshops. Since Georgette’s death, their daughter Melissa is the official hostess. Formerly, she performed on television and off-Broadway. Melissa also wrote the lyrics to the Wilburton song, “We didn’t buy it to run it like a Hyatt.” Max, her youngest sibling by 15 years, earned a PhD. in psychology. “Max is a little bit rabbi,” Melissa says. “I’m a little bit Broadway schmaltz.” Their brother Oliver’s family lives down the road in the old farmhouse, where Levis first held corporate retreats. Oliver studied agriculture at Cornell and lives above the bakery Earth Sky Time. He supplies the inn and nearby restaurants with bread and organic vegetables in season. When Oliver’s oldest son turned 13, he had a “barn mitzvah.” Boards laid over stacked hay bales served as the bimah. 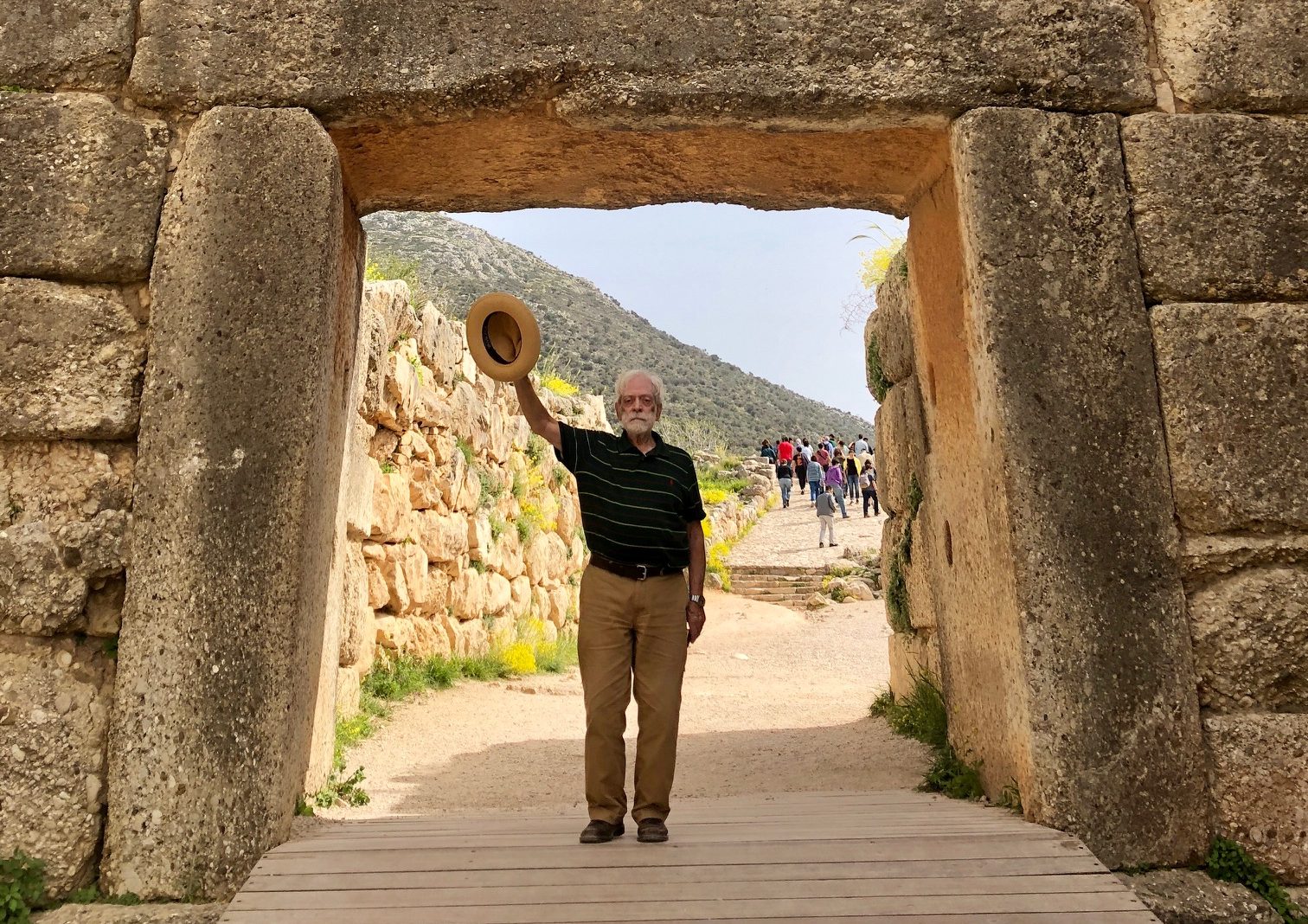 Albert Levis on his trip to Greece (Credit: Melissa Levis)

Surrounded by his large and loving family, Levis’s memories often turn to thoughts of Greece and his own childhood during the Holocaust. To share his memories, in April he hosted his children and grandchildren on a Jewish heritage trip to Greece. “We connected with strangers, finding they were relatives, and we made new friends,” he says. But, he confesses, “all was not easy. In Athens, it was a broken Star of David; its amputated corner stones inscribed with the decapitated communities. We encountered abandoned houses, the ruins of a wonderful past, and listened to sad stories; we became more aware of the drama of having had a community and of having forever lost it.”

They visited his father’s homestead in Athens and saw his grandfather’s name on a donor plaque at the Vlos synagogue. “My American family saw its roots in towns and villages and with pride detected the Greek family’s presence and prominence,” he says.

END_OF_DOCUMENT_TOKEN_TO_BE_REPLACED

2 thoughts on “At 81, a Greek Holocaust Survivor Looks Back”