Romania, haunted by its past
2018 September-October, Arts & Culture

When Alfred Moses, an attorney and prominent national Jewish leader, traveled behind the Iron Curtain to Romania in 1976, the impoverished country was under the thumb of the ruthless and corrupt dictator Nicolae Ceausescu. The trip changed Moses’s life, inspiring him to fight for the freedom of Romania’s Jews. Years later, based on his work with the country, President Bill Clinton appointed Moses as the U.S. ambassador to Romania. He assumed the post in 1994, just as Romania was taking its first tentative steps out of four decades of economic stagnation and political repression toward privatization and democracy. Moment speaks with Moses about his new book, Bucharest Diary: Romania’s Journey from Darkness to Light, which recounts his decades-long relationship with Romania, and is a primer for anyone interested in Romania’s history and future. 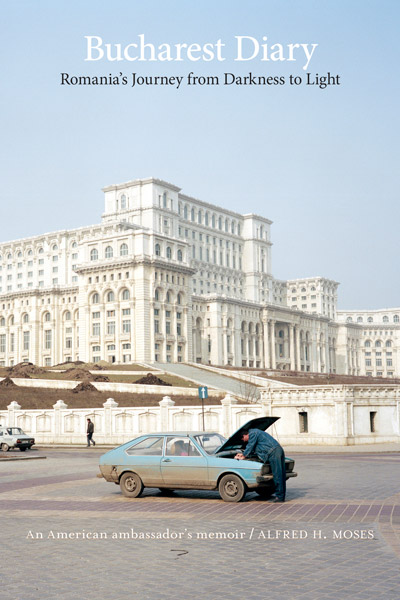 When I went there in February 1976, to lead a delegation from the American Jewish Committee, a couple of young fellows approached me. They asked me if I was American, and if I was Jewish, and I said, “Yes.” Then it all poured out: They said that life for Jews in Romania was horrible, and I had to help them get out—which became my mission for the next 13 years.

What did you do to pressure Ceausescu to let Jews leave Romania?

There was opposition; it was never a slam-dunk, but we were successful in urging the U.S. Congress to extend the most-favored-nation status annually for Romania. In return, we made it clear to the Romanian government that continued support for Romania in Congress was dependent upon Romania allowing its Jews to go to Israel. We communicated this directly to the foreign minister, but more importantly on three occasions to Ceausescu himself.

How did you become the U.S. ambassador to Romania?

It was a long shot. I had no idea that the State Department would actually nominate me. I was not a foreign service officer. I had no reason to believe that President Clinton or his staff would support my becoming ambassador. But many people weighed in on my behalf, and lo and behold, I became the ambassador. All because of my actions on behalf of Romanian Jews.

What was the biggest challenge of your three years as ambassador?

Romania was a basket case when I arrived. Ceausescu had been executed on Christmas Day in 1989. Economic conditions in Romania were dreadful. I saw it as my responsibility to try to bring the country into the family of Western democratic countries, to rebuild its economy, to help it build its democratic institutions. In other words, to help it become part of modern Europe.

Unlike its neighbors Poland and Hungary, Romania has not veered sharply right.

What would you say was your biggest success?

As ambassador, I had a role, along with others, in working with two administrations in Romania: the first, a social democratic government led by Ion Iliescu, and the second, a center-right coalition, a Christian Democratic coalition, led by Emil Constantinescu. I worked with both presidents to help Romania rebuild its democratic institutions, privatize its industry and strengthen its democracy.

One sign that we were on the right track was President Clinton’s visit to Romania in July 1997. He was wildly cheered by 500,000 Romanians in University Square. He said the prophetic words that if Romania continued down the road of democracy, the U.S. would take Romania by the hand and try to bring it into NATO, which was quite ambitious—and which subsequently happened. I think that the enduring legacy of the bilateral relationship is this strategic partnership, which I formulated, named and persuaded the administration to propose, and which was accepted by President Constantinescu. That strategic partnership still exists today as a result of the stationing of U.S. forces in Romania.

How is Romania doing today?

Unlike its neighbors Poland and Hungary, Romania has not veered sharply right. It is maintaining its centrist pro-American policy. It nevertheless has severe internal problems centered around corruption, a historic problem for Romania.

Has Romania recovered from the tragedy of Ceausescu’s rule?

No. It never will, nor from the fascists who preceded Ceausescu. It’s an enduring legacy. Have we ever recovered from the horror of slavery? No. The Civil War was 160 years ago, four generations. The stain of communism will haunt Romania for decades.

Is Romania a good place for Jews to live today?

No. The Jewish community tries to survive, but it’s an elderly community. Young people, Jewish and non-Jewish, are moving westward to France, Italy, Germany, England and the United States, and east to Israel. Romania’s Jewish community has the material means to survive because of reparations, but it can’t truly provide a vibrant, exciting Jewish life for its youth. If I were a young Jew in Romania today, I would set my sights on moving to Israel.

END_OF_DOCUMENT_TOKEN_TO_BE_REPLACED

A ceasefire between Israel and Hamas is in place, but tensions remain high. What made this outbreak of war different? Will the violence and unrest impact the Abraham Accords—and the region? What can be done, if anything, to end the cycle of violence? Middle East analyst and negotiator Aaron David Miller is interviewed by journalist Nathan Guttman.

END_OF_DOCUMENT_TOKEN_TO_BE_REPLACED

Twitter Explained | A Day in the Life of ‘Half of Republicans’

Facebook Twitter Pinterest linkedin Telegram
On the morning of April 5, Reuters/Ipsos released a poll that found that half of Republicans believe that the January 6, 2021 attack an...