Beshert | Camp Counselors for a Summer, Partners for Life

I was a junior at Boston University, majoring in Speech Pathology, working my way through school in a variety of jobs. I packed candy in a mom-and-pop factory, sold men’s underwear at a downtown department store and performed dramatic readings for Jewish women’s clubs like Hadassah and B’nai Brith.

My summer job was supposed to be as Drama Counselor at a Jewish girls’ camp. I wasn’t thrilled about an all-girls summer, but it was a good opportunity and, surely, I could survive a summer without male companionship.

But two weeks before camp opened, my friend Shayna told me about her summer job: counselor at a camp for emotionally disturbed children. That sounded interesting and would relate to my major. Plus, it was a coed camp.

Shayna happened to call the camp director immediately after a woman called him to turn down a counselor job. After a quick telephone interview, he hired me on the spot.

I met Ken, a fellow counselor, the day I arrived. He was handsome, with thick black hair and deep, piercing dark eyes. He was tall, almost 6’ 2”, and very good looking. We soon became a couple, spending evenings together after the campers were in bed.

There was a gentleness about Ken that I hadn’t found in other guys. He was bright, a deep thinker; insightful beyond his years. We shared a love of music, theatre and nature. We were both planning careers in helping professions. (His was Clinical Psychology.)

We each had one year until graduation. Ken was at New York’s City College. Back at school, we spent weekends riding the Red Eye train between our cities for something like $5.00 round trip. 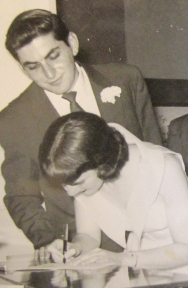 Audrey signing the ketuba on their wedding
day, June 1, 1954. This year will mark their 66 th anniversary.

We applied to several graduate schools, hoping one would accept both of us. And one did: the University of Iowa.

Iowa? Was that even in the United States?

That fall, we traveled in a rattletrap 1946 Nash to Iowa City to begin grad school.

Our first year of marriage was challenging. We were East Coast city folk in a totally unfamiliar milieu. In Iowa City, we felt like fish out of water. Cockroaches and mice overran our substandard housing. When a terrible ice storm hit, Ken fell on the ice and broke an arm. 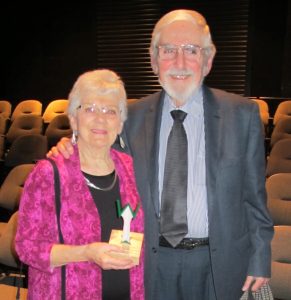 Audrey and Ken in 2018, when Audrey received the Arts Advocate Award from the Ivy Tech John Waldron Arts Center, in Bloomington, Indiana.

That year could have had deleterious effects on our marriage; instead, it brought us closer together. We transferred to Penn State, happy to be back East. Ken’s teaching eventually brought us to Indiana University.

Our marriage has been one of love, respect and mutual support.

What brought us together? Was Shayna’s call to the camp director just a coincidence?  Was the sudden job opening he had a coincidence? Why did he hire me over the phone, sight unseen?

I believe no coincidence brought us together. Ken and I were truly beshert.

Audrey and Ken Heller live in Bloomington, Indiana, where Audrey is the Producing Artistic Director for the Jewish Theatre of Bloomington, which she co-founded in 2005 (www.jewishtheatrebloomington.com). She and Ken are retired Indiana University faculty members. Ken is a peer reviewer for professional journals. He plays with an accordion ensemble, InAccord. The Hellers are active members of Bloomington’s Beth Shalom Synagogue. They have three grown children and six grandchildren.

One thought on “Beshert | Camp Counselors for a Summer, Partners for Life”