Beshert | Love on the Line

For Arie, it was love at first sight when I entered the Zolla Lieberman Gallery on the near north side of Chicago in the spring of 1979.

For me, it was the glowing images on the walls of the cavernous loft. Light reflected from aluminum extrusions upon a white canvas created an evanescent aura of rich pastel colors. I had to meet the creator.

Amid the bustling opening, I managed to chat with the charming artist with the familiar accent. I was stunned to learn that we were born two years apart in the USSR, he in Tashkent, Uzbekistan and me in Jalalabad, Kyrgyzstan.

In amazement, we learned that our families shared the same WWII backstory. It was the story of my life!  Both Arie’s and my parents were Polish Jews who’d fled east from the Nazis, got scooped up by the Russians, and ended up in the SSRs at the end of the war.

In another time, we’d have met in a shtetl or in cosmopolitan Warsaw. But with history as it was, our surviving families had eventually emigrated to America, landing in Chicago. At warp speed, we spoke Yiddish, discovered mutual friends and favorite foods.

Our kinship was instant, but unlikely. Arie lived in New Jersey, too far to date, albeit he was a romantic artist. As the gallery director whisked him toward several collectors, he promised to call me.

And two days later, he did, from New Jersey, initiating an old-fashioned romance on our AT&T landlines. Slowly, expensively, we became acquainted. By week three, we lived for our nightly conversations. Years were packed into hundreds of hours and thousands of dollars on the phone, as we unearthed parallel lives that finally intersected. By the time we met again in person, we were wildly in love with those tender voices in the night.

Two months later I went to O’Hare Airport to meet Arie. Barely able to summon his image from our brief meeting, I concluded that I’d lost my mind. Yet I believed that I would sense my beloved’s arrival. I wore the red dress I’d worn to the gallery, fearing that he might not recognize me otherwise.

The airplane taxied to the gate, the passengers descended and finally, the bearded artist with the untamed mane of hair appeared. Now, his hair was shorn, his beard groomed, and he wore a gray three-piece business suit. The transformation riveted me. Who was this? When our eyes met, I knew. Slowly, Arie’s arms stretched out to me. He spoke my name, beckoning me into his embrace. I rose and rested my head on his shoulder. Weary from waiting and full of love, I felt at home. 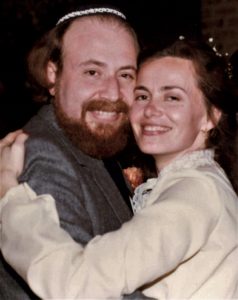 Despite a drizzle, we drove downtown to wander in the world together for the first time. At a traffic light, we indulged in our first kiss and a hug both achingly new and comfortingly familiar. Despite the years apart, it seemed we had always known each other.

We married nine months later. Decades have passed with children and grandchildren, art, writing, joy, sorrow, and all the life in between. His art and the phone company brought us together. We are grateful.

Sara Nuss-Galles’s work has appeared in the NYT, the LAT, Lilith, ORT, and literary magazines and anthologies. She was featured as a guest columnist on Public Radio’s Marketplace. She lives with her husband, artist Arie Galles, in Laguna Niguel, in Southern California. Forty-one years later, Arie still creates the art that first attracted Sara. You can find it at www.ariegalles.com.

5 thoughts on “Beshert | Love on the Line”