Long before fused celebrity names like “Brangelina” (now back to Brad and Angelina) became trendy, my college roommate and I were known as “Shareyna.” Thirty-six years ago this fall, Reyna and I met as Yale freshmen after a guy friend asked me why I switched back and forth between two outfits every day and I realized that he must be mistaking me for someone else with a similar face but different clothes. I had watched “The Parent Trap” (friends mix up identical twins who meet for the first time at camp) enough times to know that this meant I had a doppelganger.

It turned out that my twin-like double lived three floors below me. Reyna was another five-foot-four, dark-haired young woman from the shared gene pool of Eastern European Jews. We stood next to one another in Freshman Chorus; I was a first alto, she was a second alto. We ate meals together and attempted to exercise with some regularity to a Jane Fonda video, our frizzy 1980s bangs dangling in our eyes. 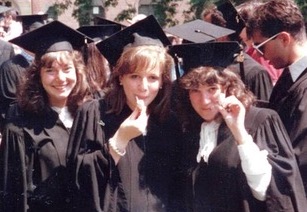 Among other life lessons, Reyna introduced me to cold sesame noodles, Thomas Mann and The Magic Mountain, and the necessity for a good down jacket in a northeastern winter. (I came from Norfolk, Virginia, she was from Great Neck, Long Island.)

At the end of first semester, I met another life-long friend, Kim. Like me, she’d grown up Jewish in the South (she was from Atlanta), and she understood what it felt like to live in a culture in which you were both an insider and an outsider. Kim had curly blond hair that she tamed into submission each day. We devoured hot-air popcorn and diet root beer on study breaks while she belted out Kenny Rogers songs.

Reyna, Kim, and I roomed together for our sophomore year in an architecturally curious dormitory that was claimed to have no right angles. Our three beds never quite fit against any wall. That year, we survived mono and the heartaches of unrequited loves. The three of us “pinned” our housing cards together in the room lottery to live next to one another for junior and senior years, too.

There was a brief golden time when all of us lived in the New York area, then Kim went home to Atlanta. Shareyna lives about a seven-minute drive apart in Westchester. We still try to exercise together every week. We call each other almost daily.

Whether they have lived blocks or states away, these women have been my bonus sisters. Kim never told me about breaking out in hives from the bridesmaid dress for my wedding. After my son’s bris, when I retreated to my bedroom to nurse him and cry a little, Reyna materialized with a smile and just the right words.

Kind, funny and wise, they are my besherts.

Sharon Forman is a Reform rabbi and Jewish educator and the author of The Baseball Haggadah: A Festival of Freedom and Springtime in 15 Innings. A Bar/Bat Mitzvah tutor at Westchester Reform Temple in Scarsdale, New York, she is married to Steven Marx. Reyna Marder Gentin was an attorney before becoming a novelist in Westchester. Kim Hoelting is a senior executive in the beauty industry. She lives in Atlanta. Between them, the beshert friends have seven children, whose many mitzvot have meant joyous reunions through the years.

Top Photo: Reyna and Kim with Sharon at her wedding to Steven Marx on August 15, 1999 in Long Island City, Queens.

Facebook Twitter Pinterest linkedin Telegram
I was raised in Downers Grove, Illinois—the kind of place with so few Jews that when someone found out I was Jewish, they’d always ask,...

END_OF_DOCUMENT_TOKEN_TO_BE_REPLACED

Beshert | Was My Depression Meant To Be?

Facebook Twitter Pinterest linkedin Telegram
If you ask my therapist, she’ll say I’ve been struggling with hypomanic depression since my freshman year of college. But if you ask me...

END_OF_DOCUMENT_TOKEN_TO_BE_REPLACED

Beshert | Bestie In My Building

Fast forward six months later. I now lovingly call my neighbor my friend. She is exactly what I was searching for in my little neighborhood. We’ve named each other Lucy and Ethel. We laugh, we talk, we share. We drink coffee and write. We watch The Marvelous Mrs. Maisel. Best of all, she lives right below me. And has all along.

END_OF_DOCUMENT_TOKEN_TO_BE_REPLACED

One thought on “Beshert | Shareyna and Kim”