I was raised in Downers Grove, Illinois—the kind of place with so few Jews that when someone found out I was Jewish, they’d always ask, “But you still celebrate Christmas, right?” No, we didn’t celebrate Christmas, but we weren’t super-observant either. We belonged to the only Reform temple in Chicago’s western suburbs in the early 70s. We celebrated the “big” holidays and loved Jewish food, but things like observing the Sabbath, keeping kosher, and studying Torah… not so much. I had green eyes. I was fair. I looked Irish. And yet, as my mother said, Jewish is Jewish, and if Hitler showed up in DuPage County, bacon in the fridge and almost blond hair wouldn’t fool him.

When it was time for college, I applied, as did five hundred other kids in my high school class, to the University of Illinois and also to one suggestion each from my three older siblings. My sister Barbara, a product of the 60’s counter-culture, suggested Brandeis University. It was a natural choice—my family was liberal, just to the right of socialism.

I knew absolutely nothing about the school’s Jewish connection, only that it was located outside Boston, which was as good a reason as any to pick a college when you are seventeen. When Brandeis wait-listed me in the spring, I made my plans to go to U of I.

Then, in late July, my father showed up at my part-time sales job at a local clothing store with a big grin on his face and a fat envelope in his hand. There were probably tears in his eyes as he realized my in-state public college tuition just got doubled, but I don’t remember that part. I was accepted off the waitlist and was going to Brandeis! 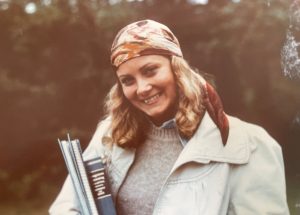 Diane on campus during her junior year headed to class.

You might think this story is going to conclude with me going to Waltham and finding the wonderful Jewish boy I never would’ve met if I stayed in Illinois. But I didn’t. (I actually dated a guy also named Cohen, who was a second-generation Catholic but that’s another tale.) No, the “beshert” part of this story is that I met not just one special Jew but a whole community of Jews—tall, short, athletic (who knew?), smart, not so smart, funny, serious, observant, lapsed—who I had never known existed. I found and fell in love with the totality of my own people. For the first time in my life, I felt connected, seen and understood.

When I went to Brandeis, one of the first things that students there asked each other was, “Which Ivy were you rejected at?” So, thank you to the someone I will never know who decided to go to Harvard or Yale, which created my beshert place at Brandeis, off the waitlist and into my tribe.

Diane Cohen Schneider grew up in Illinois and graduated from Brandeis University in 1978. She spent most of her adult life in Stamford, CT, with her husband, Rich Schneider, and their three children. Her career as a Wall Street sales executive during the 1980s Go-Go years, inspired her debut novel, The Laws and Effects of Money, slated for publication in 2022. She continues her love of finance through an Instagram account called @Moneylikeuhmother. Diane and Rich recently moved to Santa Fe, NM.

Top photo: Diane (first from the left) and her roommates in the Brandeis gym parking lot, Waltham, Massachusetts, 1977.

END_OF_DOCUMENT_TOKEN_TO_BE_REPLACED

Beshert | Was My Depression Meant To Be?

Facebook Twitter Pinterest linkedin Telegram
If you ask my therapist, she’ll say I’ve been struggling with hypomanic depression since my freshman year of college. But if you ask me...

END_OF_DOCUMENT_TOKEN_TO_BE_REPLACED

Discovering Science in the Zohar

Facebook Twitter Pinterest linkedin Telegram
Throughout The Lost Symbol, Dan Brown extols the importance of the Zohar, the classic book of Kabbalah, as an incredible source of know...

END_OF_DOCUMENT_TOKEN_TO_BE_REPLACED

Facebook Twitter Pinterest linkedin Telegram
By Lily Hoffman Simon Imagine the following: on one side of the room, there is a group advocating for Palestinian liberation. Facing t...