Documentary filmmaker Roberta Grossman is obsessed with the Holocaust, always has been. Its ever-present evil—the ultimate “rift in humanity,” she says—just won’t let go.

“It’s not that I can’t pull away from it, but rather why others can.” So she asserts on the phone from her home in Los Angeles. Producer Nancy Spielberg (yes, Steven’s sister), with whom Grossman collaborated on the Holocaust documentary Who Will Write Our History, is participating in the conversation from her New York home. Their film, which has already been screened at various festivals worldwide, will make its television debut on the Discovery Channel on January 26 at 3 p.m. The telecast is part of Holocaust Remembrance Day commemorations. It’s also the 75th anniversary of the liberation of Auschwitz.

The two filmmakers, neither of whom lost family members to the Holocaust nor view themselves as activist-artists are nonetheless Jewish-minded, profoundly so. But they knew from the outset, they say, that Jewish stories are not “sexy,” or easy to sell. Holocaust narratives pose additional problems, as they can often be trivialized in the wrong hands. Also, many audiences have simply grown inured to the whole subject. “Yes, of course, there’s the problem of oversaturation,” Grossman says. “Even among my friends and family: When I told them about the film they rolled their eyes and said, ‘Oh, no, not another Holocaust film,’ and I said, ‘Oh, I didn’t know there were six million films on the topic.’”

That said, Grossman stresses that the film, first released in July 2018, is decidedly different from other Holocaust movies and arguably one of the most important, not least because it tells a little-known story. Set in the Warsaw Ghetto (1940-1944), teeming with Jews and flanked by encroaching Nazis on all sides, the movie zeroes in on a group of intellectuals, journalists, artists and writers—led by Jewish historian Emanuel Ringelblum—who, while living in the depths of hell and struggling to survive, made it their top priority to collect, record and preserve eyewitness accounts (essays, diaries, surveys, letters, paintings, photographs and children’s writings, among other documentation) that would serve as testimonials to the truth even if its writers did not survive. The ghetto’s underground intelligentsia gave themselves the code name Oyneg Shabes, meaning “enjoyment of the Sabbath.”

In the end, only three survived, but most of the documentation buried in the ground beneath the rubble was ultimately uncovered after the war, revealing a treasure trove (a time capsule if ever there was one) of more than 60,000 pages written by ordinary, and sometimes not so ordinary, civilians evoking what life at its most quotidian, grotesque and heroic was like on a day-to-day basis. What emerges so forcefully is that despite the mind-bogglingly inhumane setting, education, religious ritual, civic life and culture flourished. 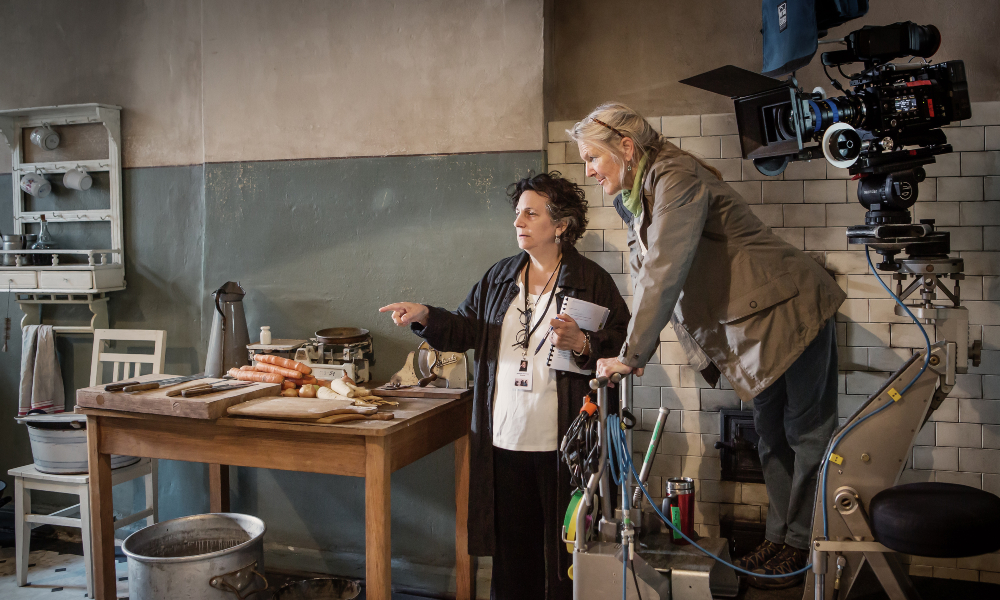 Oscar-nominated actress Joan Allen (Nixon, The Crucible, The Contender) and Oscar-winning actor Adrian Brody (The Pianist) narrate the story, reading from the various documents. The voice-over, coupled with archival photos and footage, is interspersed with reenactments featuring Polish actors.

Best known for her films Above and Beyond and Seeing Allred, Grossman first became aware of Oyneg Shabes more than eight years ago when she encountered Samuel Kassow’s book of the same title. (Moment also described the work in detail in a 2018 article titled “The Ringelblum Archive.“) “Ten pages in I realized this story had to be told,” Grossman recalls. “I had to film it. We are all stuck on the six million lives lost. Like Anne Frank’s diary, this documentation breaks down the Holocaust to unique, individual stories while telling a collective story of a living, breathing community.”

“It’s about survival of the soul and the ethical decisions one is forced to make even under the worst possible conditions,” says Spielberg, whose roster of producing credits include On the Map and Above and Beyond. “It tells what it means to be human. There’s one photo that triggered a reaction in me. It’s a picture of a woman who looks just like a friend of mine from Beverly Hills. It frightened me. Here she is with her fancy lifestyle and fine shoes suddenly reduced to a woman lying on the street.”

None of this is to suggest the Jewish community was devoid of bad guys. The Jewish cops, for example, were often as brutal as the Nazis. Grossman and Spielberg insist they had no conflict over presenting these characters. “The truth is complicated and we can’t know how we would behave in the same circumstances,” says Grossman. “We approached the Jewish cops in just the way the Oyneg Shabes did. Ringelblum wanted to see the ugly as well as the heroic in the archives, not sanitized.”

Spielberg also believes the portrayal was a balanced one. “If anything we had to be careful in terms of what we said about the Polish cops. We teetered in some areas. We screened the film in Poland in April 2018 on the 75th anniversary of the Warsaw uprising, and there was tension. No, I’m not saying we held back, but we wondered if we’d be in trouble. In fact, the Polish government gave us money for the production. We had Polish producers, a Polish production team, Polish actors. Everyone was wonderful. If we were making the film now with the current Polish administration, I’m not sure we would have gotten money for the project.”

Arguably, the most controversial element of the film is not the content, but rather the reenactments that some may view as tacky. Spielberg admits that she generally didn’t care for them, at least not initially, but finally came to the conclusion that there’s nothing objectionable in a reenactment if it’s well done. It’s another tool in the filmmaker’s toolbox, she says, and it’s a powerful way to draw an audience in on an emotional level, especially young audiences who have been brought up on the visual experience. She and Grossman believe it’s the artist’s job to push forward, to incorporate the art form’s evolution (artistic, technological) if it enhances the storytelling, as long as authenticity and historical accuracy are maintained.

It’s no accident that they chose Joan Allen and Adrian Brody as their narrators, two actors whom they describe as incredibly talented, intelligent, warm and in tune with the emotionally charged story without ever resorting to over-the-top performances.

“We didn’t take them for their star power,” Spielberg says.

“Yes, but it doesn’t hurt to have big names, especially with an uphill battle to get attention,” Grossman quips. 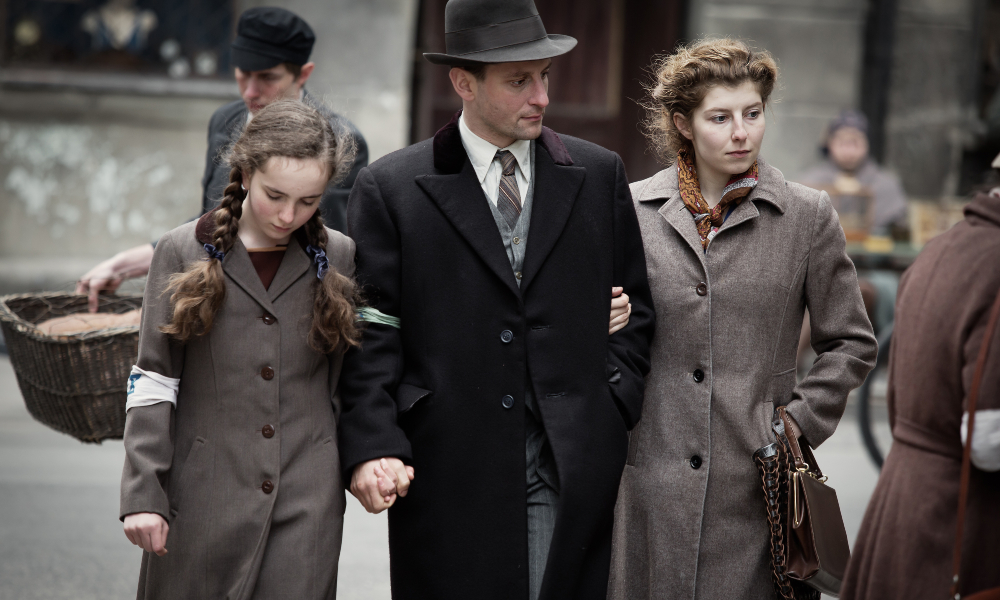 On a somber note, they emphasize that with anti-Semitism mushrooming worldwide, Who Will Write Our History has greater resonance today than they possibly could have anticipated when they first started working on the picture eight years ago. “There is a saying that a film is never finished, it’s just abandoned,” says Grossman. “We are not abandoning this one. It’s telling a story that never ends, and we are determined to see it distributed, particularly in the schools.”

“We can’t sleep yet,” adds Spielberg.

“It’s about tolerance and power and speech,” says Grossman. “I want audiences to think about what Elie Wiesel said: ‘The Holocaust didn’t start with bullets, but with words.’ When you allow people to come to power who use denigration as a tool to power we’re heading in a dangerous direction.”

Simi Horwitz is an award-winning arts reporter and film reviewer who recently won a first-place Simon Rockower Award for her piece “Abby Stein: A Gender Transition Through a Jewish Lens,” published by Moment Magazine.