Beshert | A Pandemic Pup with a Name of Her Own

We called her Toots, for about a day. And then I could not look at our wild-haired, chipmunk-size puppy and call her that name, which belonged to one of my closest friends and, as it happened, me. We had been there through every relationship, move, pet, celebration and crisis since we met at our first post-grad school job in New Jersey, where our names emerged the day a newsroom co-worker called out, “Toots, the phone is for you.” I’d stood up indignantly and yelled, “Don’t call me Toots!” After that, my friend offered it up as a joke, and soon I was calling her Toots as well. It stuck, even after I moved back to my home state, California.

My husband and I had looked for a dog before the pandemic, but during the shutdown, everyone seemed to be looking – and finding – them, except us. We checked shelter listings, rescue and breeder sites, in vain. In San Francisco, a city already home to more dogs than school children, suddenly everyone had a puppy. Dog parks were full until they closed due to the virus, and then sidewalks were full. We couldn’t walk a block without seeing someone who’d just adopted a dog.

“Oh, forget it,” I said to my husband, partly due to a long-held notion that I didn’t want what other people wanted. Maybe that’s why, when a Cockapoo breeder he’d emailed in the Central Valley responded, I was thinking, is this actually a good time to get a puppy? I had a book coming out and I knew I’d be busy. My husband was back at his office part-time.

I had a conversation going on in my head the entire five-hour drive there. Was this the right dog? What if the woman was a scammer and didn’t actually have a dog? What if she did? I kept the internal dialog going on the trip home, the tiny eight-week-old puppy asleep on my lap while my husband drove. Whenever she woke up, she shivered and looked me in the eyes like she was sizing me up, or maybe giving the first sign she knew she could train us. I cradled her closer and wondered how anyone managed to take another creature to an unknown place.

She didn’t even have a name, so we started brainstorming: Daisy, (too sweet) Sophie (we knew too many humans with that name), Dot (my mother’s name), Toast (my daughter’s choice).

“How about Toots?” said my husband, thinking of my friend, who’d been there for every life event.

I didn’t think I could. Good girl, Toots; stop chewing that, Toots; don’t pee there, Toots. I called my friend to see what she thought. She laughed. “And how’s the dog with that?” she asked. We tried it out until the next day when I noticed how, in certain light, the tiny puppy’s eyes were olive. By that time, she knew she was home and so did we. She’s now Olive Toots, our beloved, beshert family member, the owner of a tiny dog bed, a shelf of treats, toys all over the floor, and our hearts. But she’ll never be Toots. There are only two of those. 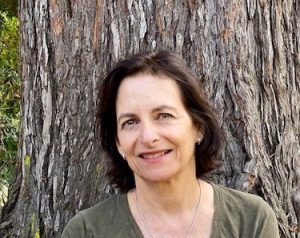 Katherine Seligman is an author and journalist in San Francisco. Her debut novel, At the Edge of the Haight, won the 2019 PEN/Bellwether Prize for Socially Engaged Fiction; it was published by Algonquin Books in January 2021. You can listen here to her talk to Scott Simon on NPR’s Weekend Edition, about the hidden lives of kids trying to survive in Golden Gate Park. Seligman is married and has two adult children. The pandemic has meant a great deal of quality time for puppy training.