Photos courtesy of T’ruah and HIAS

Images and audio clips coming out of detention centers near the United States’ southern border sparked outrage last month after the Department of Homeland Security revealed that government agents had separated approximately 2,000 children from their parents. The families were separated while trying to illegally cross the border between April 19 and May 31 as a consequence of President Donald Trump’s “zero tolerance” policy, which refers all illegal immigrants for criminal prosecution. In the weeks since the news broke, several high-profile Jewish organizations have pushed back against the policy.

Fighting Back With Words

In late June, more than 300 national and local Jewish organizations from various denominations signed an open letter to Attorney General Jeff Sessions and Secretary of Homeland Security Kirstjen Nielsen condemning the policy. “As Jews, we understand the plight of being an immigrant fleeing violence and oppression,” the letter reads. “We believe that the United States is a nation of immigrants and how we treat the stranger reflects on the moral values and ideals of this nation.” The letter concludes by calling for an immediate end to the zero tolerance policy.

“We immediately recognized the zero tolerance policy as one that undermines our values, both as an organization and as a nation,” explains Melissa Garlick, civil rights national counsel for the Anti-Defamation League (ADL), which helped draft the letter. “It’s not humane; it’s not in line with how we feel the moral values and ideals of our nation should reflect how we treat immigrants.” The ADL has since created an online petition calling for the end of the “cruel” and “draconian” policy.

In a video also uploaded by the ADL, two Holocaust survivors who had been separated from their parents by Nazis condemn the policy. “You take a child away from their parents, from their home, from everything they know, and they are never the same,” Rachelle Goldstein, a survivor who was separated from her parents in Belgium when she was two years old, says in the video. She concludes with a call for action: “When we see evil, we must call it out.”

Jews on the Ground

In addition to statements of support, some Jewish organizations have staged protests against family separation and zero tolerance. More than 100 Jews from across the nation travelled to the southern California border last week to see the situation firsthand and join non-Jewish demonstrators in the #FreeOurFuture Day of Action on July 2, which was organized by the Latino civil rights organization Mijente. Participants marched through San Diego from downtown Chicano Park to a federal courthouse. The protest precedes the expansion to California of Operation Streamline, a policy that refers illegal immigrants for speedy criminal prosecution rather than traditional civil immigrations proceedings. Under Streamline, judges often hold mass hearings of anywhere from three to 80 defendants simultaneously and the traditional legal process is frequently replaced with one meeting that serves at once as an arraignment, plea and sentencing. Citing moral and constitutional concerns, California has resisted the implementation of such procedures for over a decade, remaining for years the only state on the border without some form of Operation Streamline. That streak, however, is coming to an end this month.

The day after the protest, a contingent of more than two dozen Jewish leaders, led by the Jewish human rights organizations HIAS and T’ruah, crossed the border to the Mexican city of Tijuana, where they visited two migrant shelters, Casa del Migrante and Instituto Madre Asunta, and heard personal stories from migrants and refugees. One story elicited such intense emotion that the translator began to cry. “We are the wandering people,” explains Vera Broekhuysen, a Massachusetts cantor who went on the trip. “We are the people that have been kicked out, been told ‘you’re not wanted, you’re not equal’ time after time in our history. This is the quintessential Jewish story.” She refers to the well-known passage in the Torah that says, “The foreigner residing among you must be treated as your native-born. Love them as yourself, for you were foreigners in Egypt.” 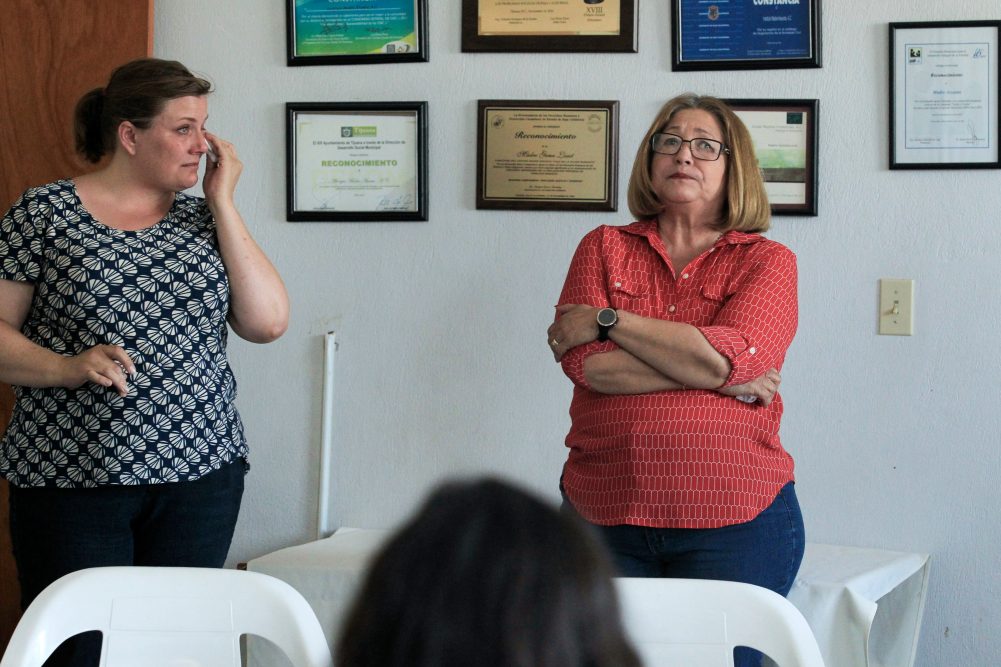 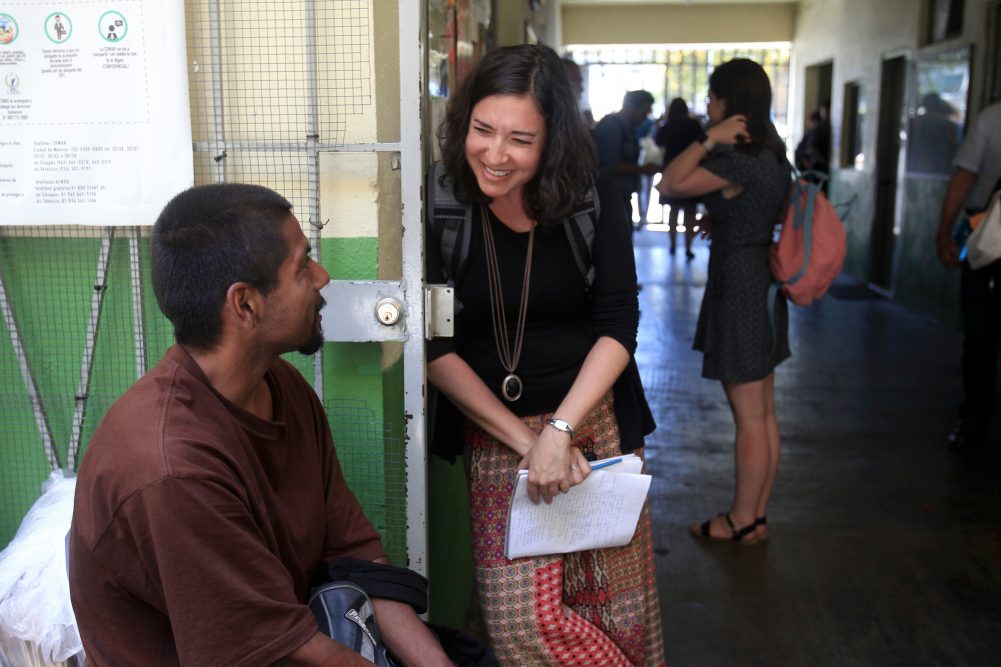 The San Diego rally was not the first event where Jews protested the mistreatment of immigrants. Several hundred protesters attended the New York Jews For a Just and Humane Policy Rally, which was staged outside the U.S. Immigration and Customs Enforcement (ICE) office in New York City on June 22. Protestors carried signs with slogans such as “Torah trumps hate” and sang songs and prayers.

After immense public pressure, Trump signed an executive order on June 20 ending the policy of family separation. The order prevents further separation of families, instead detaining them together while they await legal proceedings and possible prosecution. For these reasons, Cheryl Cook, executive director of Avodah, a Jewish social justice organization that cosponsored the New York rally, called the executive order insufficient. She describes it as a band-aid that fails to address the underlying causes of mass illegal migration to the United States or the long-standing mistreatment of immigrants coming to America: “To me, this executive order stopped a monstrous policy that never should have happened in our country to begin with, and it is not at all fixing the problem.”

Some Jews in office have been using their political power to address the issue. On June 7, Dianne Feinstein, a Jewish senator from California, introduced a bill entitled the “Keep Families Together Act,” which has since gained the support of all 47 Democrats and both Independents in the chamber but not a single Republican sponsor. The bill would prevent government agents from separating migrant children from their parents in the future except in specific cases, such as when the parents are suspected to be human traffickers or abusive. The act would also require Secretary Nielsen to create a mechanism to reunite already-detained children and their parents, which critics have pointed out the recently-signed executive order fails to do.

The first steps toward that goal were made on June 26 when a federal judge in San Diego issued a preliminary injunction requiring all separated families to be reunified in the following 30 days. In the ruling, U.S. District Judge Dana Sabraw wrote that “the facts set forth before the Court portray reactive governance—responses to address a chaotic circumstance of the Government’s own making” and suggested that it failed to follow the Constitutional requirement of due process. According to CNN, last Friday the government missed another deadline set by the court requiring parents to be able to speak over the phone with their children and earlier that week missed a deadline to reunite families with children under the age of five.

With the zero tolerance policy intact and the government slow to reunite families, many Jews—and Americans at large—still have more than enough to protest, as shown both by Mijente’s San Diego protest and the June 30 Families Belong Together March, which drew around half a million participants in multiple cities. “There’s a misperception that Jews are one-issue voters,” says Mark Hetfield, the CEO of HIAS. “It’s totally false, and we have to correct it. This has to be one of the issues that influences the way we vote. And it can’t just be about saying the right thing—we need to see actual action. This decades-old problem of the mistreatment of asylum seekers needs to be addressed.”

Cook encourages American Jews to remember their history and to make their religion visible while protesting. “It’s really tremendous to show up at a rally and see our incredible partners in the Jewish community who are also there, who are also speaking up. I urge people to show up—and to show up as Jews.”

END_OF_DOCUMENT_TOKEN_TO_BE_REPLACED

The Triumphs and Failures of a Jewish Son-in-Law

Nearly four years into Donald J. Trump’s presidency, Jared Kushner and his wife, Ivanka Trump, the president’s daughter, remain the prince and princess of the administration and arguably the nation’s “First Jews.”

END_OF_DOCUMENT_TOKEN_TO_BE_REPLACED

We Asked Our Voters: How Do You Feel About November?

As part of our Jewish Political Voices Project, Moment has been following 30 voters—3 from each of 10 battleground states—over the last 12 months as the political climate continued to shift and the pool of Democratic presidential candidates narrowed. As one of their final check-ins before casting their ballots, our voters shared their thoughts on the Trump and Biden campaigns, voting by mail and more.