Jewish Guilt: I Am Done Passing It from One Generation to the Next

In my family, many beautiful traits and qualities have been passed down from one generation to the next. There is my deep love for people, my dark brown hair, my athletic ability.

There are also the not so good qualities, the ones that have not served me very well: my prematurely gray hair, sensitive skin, the breast cancer diagnosis I received more than six and a half years ago. And then there is the guilt—the serious dose of Jewish guilt that has followed me around like my shadow.

I have felt this invisible and silent guilt throughout my life. It has seeped into many happy moments and did its best to steal away some of the joy and happiness I worked so hard to create. For a long time, I let it. I did not understand what it was, or that I had a choice in the matter. That was then, this is now.

Looking back on my childhood, I was introduced to Jewish guilt long before I could put a name to it. When I was in kindergarten, at the Jewish day school where I went until fourth grade, I remember learning how important it was, as a Jew, not to eat pork or shellfish. The problem was, back then, my family would eat bacon for breakfast, and not the organic turkey kind we eat now. The real thing. It was evident our level of Jewishness was not the same as the school’s— a little issue that left my younger self laced with guilt I did not know how to verbalize. There I was, sitting in my yellow and green Holly Hobby-decorated room, smelling the scent of bacon and feeling guilty. Would God be upset? Had my family let God down? On another occasion, visiting cousins during Passover, I accidentally ate cereal that was not made for Passover. Would my parents be upset that I broke the laws of Passover? What would they say? More guilt. I could go on and on about this feeling of letting my family down, not doing what was “expected,” breaking the “rules” and not making the “right” choices. I am 49 years old, so there is a lot of material to work with.

I have tried to explain Jewish guilt to my non-Jewish friends. While it is often a source of humor and jest—as in portrayals of a nagging “Jewish mom” who makes her kids feel bad about not doing something she wants them to do—there isn’t really anything funny about it. Truthfully, I believe the Holocaust played a role in the development of Jewish guilt because survivors of the Holocaust often felt terribly guilty about living while so many of their loved ones had died. I saw this firsthand. My dad’s parents fled Nazi Germany, losing almost all their family in the Holocaust. This tragedy and the survivors’ guilt my grandparents felt for being able to leave Germany while the rest of their family couldn’t became a part of our family. Education, doing the “right” thing and the importance of being a devoted Jew were stressed. While it was not mentioned, this was clearly understood: Our family died in the Holocaust, we got out, make your life matter. Make it count. Make them proud of you.

So Jewish guilt runs deeply through my family and has been passed on from one generation to the next. We are all so connected, in positive and not so positive ways.

A few weeks after I had my first daughter, my mom died from cancer. To say I was seriously angry at God, the universe, everything, is an understatement. I would think about how she did everything “right” and still got sick and died. I struggled. I wanted to know why this had happened to her. To us. To my family.

I could not seem to find an answer that helped me find the peace I searched for and needed. Still, though, guilt was there. When I went on a nice vacation, I felt guilty that I was able to do so while my mom was not. When I stopped going to temple regularly or forgot to light the Sabbath candles, I felt  I was letting my mom down.

It wasn’t until I had my own daughters, and got my own cancer diagnosis, that I was finally ready to look this guilt directly in the eye, make the intentional decision to live the rest of my life without it and let it go. It was not easy, though.

When I was 42, I heard the words, “You have breast cancer.” At the time, my daughters were 11 and 14,  and this diagnosis disrupted everything. I learned there was “luck in cancer,” and although I did not feel very lucky, I had been diagnosed at a relatively early stage and, thanks to a lot of research, had access to many successful treatments.

Somehow, even when I was dealing with cancer, guilt was still there. I felt sorry for my Mom, the diagnosis and prognosis she had received, and thought a lot about this when I was going through my treatment plan.

I did not know it then, but I had a lot of work to do—years of pain and grief to deal with and peace to find. I had to learn not only to say, “My story wasn’t my mom’s story,” but to really believe it. I needed the courage to accept what had happened to her and to me, make peace with my diagnosis and give myself permission to move forward with my life, even though she wasn’t able to move forward with hers.

It was really my youngest daughter, Avi, a 17-year-old, strong-willed individual, who helped me see the level of guilt that had been my lifelong companion.

When Avi does not understand the reasoning behind a decision I have made, she does not just accept it for what it is. She questions it, often crossing the line normal mother-daughter bickering. Often frustrated, I have mentioned many times how I do not appreciate her questioning me, to be met with, “This isn’t me being disrespectful. It is an asset and a strength. It should be celebrated.”

I do not always agree.

We were having a heated conversation about something she wanted to do versus something I did not want her to do. “Avi,” I said, “I wish you wouldn’t do that; I’m really going to be disappointed.” She turned to me, paused, and then said these words, “Sometimes, I have to do things I believe are correct, even if you don’t. You might want to think about this. What are you not doing because you don’t want to disappoint someone?”

There it was. Exposed.

Later that evening, when I had time alone to think about the conversation, I could not seem to shake her words. She had triggered something, unintentionally, and I knew she had a point. What was I doing or not doing because of guilt? Had living with Jewish guilt become a habit? Was I ready to let it go?

It has been 20 years since I lost my mom. Learning to live in the world without having her by my side has been one of the greatest challenges of my life. I am grateful to feel so connected to her and have many beautiful qualities and traits I know I received from her. I have been intentional about passing these on to my daughters and know she would be so happy to see the young women they have become.

However, there is one quality I am working hard not to pass on to my daughters: Jewish guilt. This unnecessary burden is not something I want future generations to experience, carry, take on. And so, I do my best to pay attention to this, give myself a big dose of grace and let it go. And I know my mom would be so enormously proud of me for doing so. 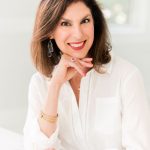 Dara Kurtz is the creator of crazyperfectlife.com and author of I am My Mother’s Daughter: Wisdom on Life, Loss, and Love. She lives in North Carolina, with her husband and daughters. Receive 5 free gifts when you order her book here!
Tags:
essay, Guilt, Jewish Moms
Facebook Twitter Pinterest linkedin Telegram

“Most nights, there was one stray ticket that theaters were happy to sell cheap to a college girl with a debit card and frizzy hair. Not the case at The St. James Theater on West 44th Street, home to The Producers. You couldn’t get this ticket at TKTS and it was years before you could buy resold tickets online. Night after night, The St. James was my first stop to see if there was a ticket for sale. And night after night, the same ticket lady would turn me away. Until now.”

END_OF_DOCUMENT_TOKEN_TO_BE_REPLACED

2 thoughts on “Jewish Guilt: I Am Done Passing It from One Generation to the Next”