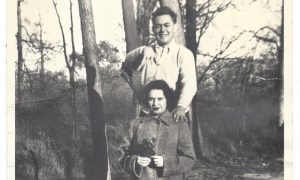 Stroll Manhattan’s Upper West Side on a Saturday night and you’ll find yourself surrounded on all sides by prospective couples trying each other out. The last few years have seen an explosion in the neighborhood’s popularity among Jews in their twenties and thirties. For New York’s young Jewish singles, destiny—or beshert—has an address, and it’s west of Central Park.

Though the term beshert can refer to any fortuitous event (“I missed the bus, but it must have been beshert, because I heard it broke down”), it’s most often used to mean a soulmate: the one person whom an individual is divinely destined to marry. The etymology of the Yiddish word—spelled, generally, either bashert or beshert—is something of a mystery. Some argue that the word comes from the German beschert, meaning bestowed or given. (Bescherung, a version of the word, is used to describe the exchange of gifts on Christmas.) Others say that it’s from the Yiddish word sher, meaning scissors or shears, the idea being that beshert is something that has been shaped in a specific way, as if cut out by a pair of unseen scissors.

The concept of a soulmate is nothing new, or uniquely Jewish. In The Symposium, Plato has Aristophanes present the idea that humans originally had four arms, four legs and one head made of two faces; Zeus split these creatures in half, leaving each torn creature to search for its missing counterpart. The widely used kismet—a Turkish derivation of the Arabic word qisma, meaning lot or portion—originated as the version of fate in the Arab world.

The term beshert is most often used to mean a soulmate: the one person whom an individual is divinely destined to marry…

Some rabbinic scholars take exception with what seems to be a negation of free will. Maimonides rejects outright the concept of a fated match: “If a person marries a woman, granting her a marriage contract and performing the rites of kiddushin, he is performing a mitzvah, and God does not decree that we will perform any mitzvot.” The disagreement reflects a deeper undercurrent in Jewish theology: the conflicting tenets of free will and divine providence. How much of our life’s path is God’s decree, and how much is the consequence of personal choice? “That tension pops up in a lot of different elements” of Judaism, says Josh Yuter, an Orthodox rabbi in New York who has written about the religious debates over beshert. “There’s a passage that says everything is in the hands of heaven except hot and cold; if you go out in winter without a jacket, it’s not God’s fault you catch a cold.” Likewise, scholars debate whether marriage is the result of a divine plan, or individual choice and persistence.

Some sources say there is a variation on beshert known as zivug, translating roughly to partner. The scholar Rashi maintains that a zivug is determined based on the quality of one’s deeds; a life better-lived will earn one a better pairing. Others say that there is a first zivug and a second zivug, and that a person might have two matches for various reasons. Rashi’s grandson, the 12th-century rabbinic authority Rabbeinu Tam, contends that a second zivug applies only to widows and widowers, and that a person’s husband or wife might die early if another righteous person deserves the widow or widower as their own spouse.

The term beshert found deeper resonance after the 18th century, when romantic love and compatibility began to replace marriages arranged on the basis of money and social standing. The question of arranged marriages versus chosen ones emerged as a major literary theme among Hebrew and Yiddish works of the late 19th and early 20th centuries, says Naomi Seidman, professor of Jewish culture at the Graduate Theological Union in Berkeley. At issue in many of these texts is whether being fated to be with someone means “your souls are uniquely fitted together, or that what will happen was predicted” regardless of the quality of the union, says Seidman.

One writer who fought against the infallibility of beshert was Lithuanian-born 19th-century poet Judah Leib Gordon. Gordon is most celebrated for his long, satirical poem “The Tip of the Yud,” a mock epic in which he decries the status of women in Jewish culture. In the poem, Batshua’s unloving husband, Hillel, abandons her without a proper divorce. When Batshua falls in love with Fabi, Hillel is coerced into giving her a get, but a rabbi decrees the document null and void, saying that Hillel’s written name is missing a letter—a yud, giving the poem its name. “The way [beshert] is used in Gordon’s poem is you were fated to marry this person; if he’s a jerk, if it’s totally incompatible, it doesn’t matter,” says Seidman. “Gordon is very antagonistic to the notion of beshert. He thinks it takes away modern notions like compatibility.”

Today, beshert has come to encompass compatibility. In contemporary parlance, it means a love match that may take hard work—and perhaps a little help—to find. Among myriad dating websites, the Orthodox-centric Saw You At Sinai uses old-fashioned matchmaking techniques to set up religious singles. The website, whose name comes from the teaching that all living and yet-to-be-born Jewish souls were present at Sinai when the Torah was given, uses matchmakers. Tova Weinberg, the site’s lead matchmaker, estimates that in 35 years she’s organized more than 200 marriages. She dismisses the notion of one beshert. “I believe a girl can marry 200 boys and be perfectly happy, and a boy can marry 200 girls.” An overly fervent belief in beshert, Weinberg says, contributes to the quixotic search for the elusive perfect person. “A lot of singles are unrealistic about who they are and what they can get, and this focus on beshert is killing them,” says Weinberg, emphasizing that personal responsibility and initiative are key, and echoing another Jewish precept: marriage—even to the right person—is hard work. “You make your life; you can make yourself miserable, or you can make yourself have a good life.”

Jewish Word | What a Schlep!

In 2008, a group of Jewish Democratic political operatives had an idea: If young Jewish voters traveled to Florida, they could convince their hesitant grandparents to vote for Barack Obama, thus ensuring a win in the vital swing state.

END_OF_DOCUMENT_TOKEN_TO_BE_REPLACED

Jewish Word | What Is Cancel Culture—and What Does Judaism Say About It?

Comedian Kevin Hart was bumped from hosting the 2019 Oscars for years-old homophobic tweets.

END_OF_DOCUMENT_TOKEN_TO_BE_REPLACED

Yiddish has a rich legacy of storytelling for children, including both global classics and works that originated in the mother tongue of Ashkenazi Jewry. Join Harry Potter and the Philosopher’s Stone translator Arun Viswanath and Miriam Udel, editor and translator of Honey on the Page: A Treasury of Yiddish Children’s Literature for a wide-ranging conversation with Moment Deputy Editor Sarah Breger about how they are helping to bring the legacy of Yiddish into the twentieth century, their work in relation to broad developments in Jewish history and how it intersects with their own family narratives.

END_OF_DOCUMENT_TOKEN_TO_BE_REPLACED

In Chaim Potok’s 1969 novel The Promise, sequel to the better-known The Chosen, there’s a scene that piercingly illustrates the Jewish legal emphasis on saving a life.

END_OF_DOCUMENT_TOKEN_TO_BE_REPLACED

As Israeli elections near, Moment looks at the history of political slogans in the country’s elections. From Mapai to Rabin, Netanyahu and Benny Gantz.

END_OF_DOCUMENT_TOKEN_TO_BE_REPLACED

n the 1946 film The Big Sleep, based on the Raymond Chandler mystery of the same name, Carmen—the promiscuous, drug-addicted younger sister of Lauren Bacall’s character—sizes up Philip Marlowe, played by Humphrey Bogart, and asks him, “What are you, a prizefighter?” Bogart responds, “No, I’m a shamus.” “What’s a shamus?” she inquires. “It’s a private detective,” he answers. Yes, Bogart is using the Yiddish version—more popularly spelled “shammes”—of the Hebrew word, “shamash.”

END_OF_DOCUMENT_TOKEN_TO_BE_REPLACED

New Faces of the Yiddish Revival

A new generation has taken up the banner and found creative ways to make Yiddish relevant, injecting the language into concerts, lectures, poetry, theater and podcasts.

END_OF_DOCUMENT_TOKEN_TO_BE_REPLACED

This past spring, Trayon White Sr., a Washington, DC city councilmember, sparked an outcry by blaming a late season snowfall on the Rothschilds, the famous Jewish banking dynasty, who, he explained, control “the climate to create natural disasters they can pay for to own the cities.”

END_OF_DOCUMENT_TOKEN_TO_BE_REPLACED

Narrated by Aaron, a wisecracking 500-year-old African Gray parrot with a penchant for Yiddish puns, the book follows Moishe, a 14-year-old who yearns for adventure after discovering his father’s book of maps.

END_OF_DOCUMENT_TOKEN_TO_BE_REPLACED

“Maven” is a relatively new transplant into American English. Written references to the word begin to increase in the mid-1960s and continued to rise through the early 2000s, according to Google Ngrams, which charts words’ popularity in books over time.