Beshert | “Apartners”—After He Buffed the Scratch on Her Car

Kenny and I knew each other for years. I’m a singer, he’s a drummer. In the club date biz, you freelance and show up in your black dress or your tux, know millions of songs and what key you sing them in, and with no rehearsals perform with 26-piece bands!

For some reason, we never really talked on breaks. We usually hung out with the people we knew better. So, I really had no idea what “his story” was. How old were his kids? Boys or girls? I didn’t even know where he lived.

And then we both broke up with our partners.

A lawyer who fancied himself a Sinatra-style crooner hired us for a “vanity project.” It was supposed to be one gig but the lawyer loooved singing, had a lot of money, and that one gig turned into a year of gigs, including one with a big band at Long Island’s Westbury Music Fair.

So now I would see Kenny at least once a month. We circled each other like dogs at a park, but our last relationship stories were so similar that we didn’t dare go there. The bandleader encouraged Kenny to ask me out but he’d say, “I just came out of a 20-year relationship with a Jewish woman who lives an hour away…not interested.”

But I was intrigued. As a super-strong aggressive female, I suddenly found myself shy and at a loss of how to get something started to see where it went. He plays ice hockey and is very buff, and I would say to the other singer, “Watch this,” and to Kenny, “Can you catch me?” and fall into his arms. It was so ridiculous that you couldn’t take it seriously. Hmmm, what to do, what to do?

The answer came when I injured my car (smashed a gash) in my parking garage and asked Kenny, who is a fix-it kind of guy what to do with it. He said you buy this stuff and buff it out. He told me he’d do it at the next rehearsal. When the rehearsal got canceled, I nervously called him and jibber-jabbered about putting it off.

He called back and left this message: “Hey… it’s me… don’t do anything…I’ll buff out your scratch.”

Be still my heart!

We have been ”apartners” now for 15 years. New York City to Copiague, Long Island. We make it work! 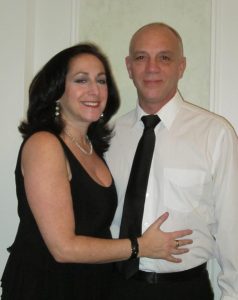 Carolee has been a singer, and voiceover actress for over 30 years. She has recorded jingles, commercials, corporate shows, audiobooks, anime, and video games, to name just a few! Meet her at CaroleeGoodgold.com. She also has a thriving bag and pillow business on Etsy. Kenny Hassler is a drummer, percussionist, teacher and author, whose books include Sightreading for Dummies. Meet him here. They agree on almost nothing, except being good moral people.