Disappointed by the hateful rhetoric she was hearing during the 2016 presidential campaign, Brooklyn-based songwriter Kristen Plylar-Moore started writing music to respond to the ways that the candidates were dehumanizing specific groups of people with her own vision of progress. Along with her wife Julia Ostrov, they have since formed a folk-rock ensemble to perform and record their 11-song show, REVIVAL.

Inspired by Jewish biblical texts and themes, the music also comments on a variety of modern American political issues, including environmentalism, women’s empowerment and LGBTQ rights. “My intention with the show was that this is music that can ground us, root us in a vison that we continue to work for, but also be a place where we can be revitalized and reminded why we do the work,” Plylar-Moore says. “We started to see if there were other communities that would like to have this music in their spiritual homes, and we went from there. We have been performing it in different places in the city since then.”

Plylar-Moore and Ostrov, along with the rest of the ensemble—Lea Kalisch, Samantha Gillogly and Ugene Romashov—hosted a “REVIVAL” release picnic party in New York on June 17. The full album will be released on June 21, coinciding with New York LGBTQ Pride Weekend celebrations. They have been working on the album since the beginning of the year and the first single from “REVIVAL, I Am” was released May 31. “In January, we simultaneously began recording the music and started an Indiegogo campaign to raise funds to also produce the album,” Plylar-Moore says. “Within the first 24 hours, we raised about 40 percent of the funds. I think we finished recording in early March and then it went off to get mixed and mastered.” 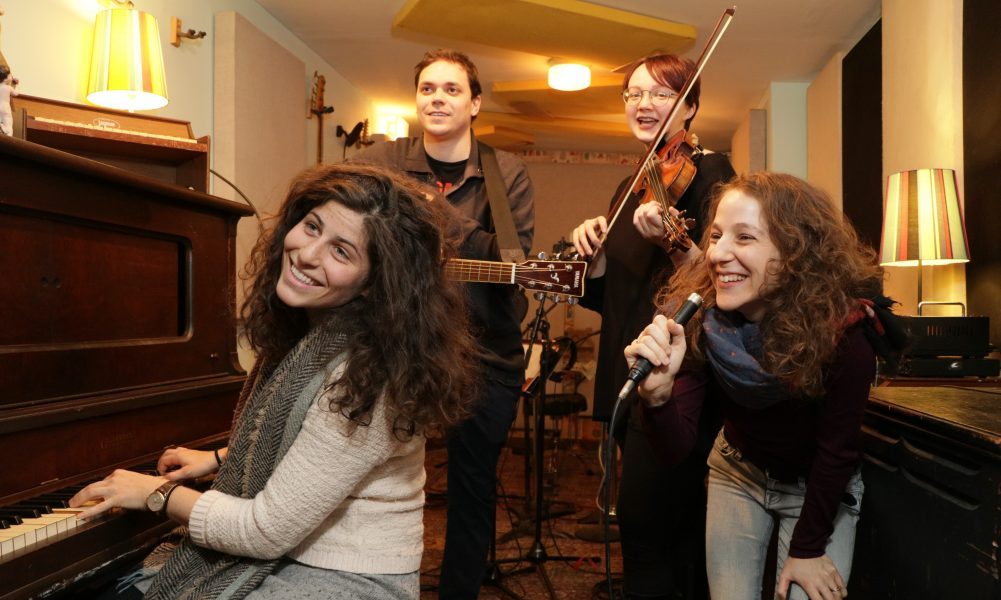 As with any creative process, the journey of “REVIVAL” has not been without its hiccups. Plylar-Moore is a songwriter and Ostrov is a singer, so they first needed to look for a few instrumentalists to join the ensemble, finding another singer, a guitarist and a violinist. However, two original members of the ensemble had to leave before the end of the project, and other artists joined in their place. Ostrov has compared the process to “crossing a river and looking for the next stepping stone, and even though you can’t see them all at once, you step on the stone that you can see and trust that others will appear.”

The album and show have been an ongoing creative project. The performance in 2016 was the first time the group performed the music, but songs have been added along the way to reflect movements as they happen. For instance, in response to the #MeToo movement and wanting to promote women’s and LGBTQ rights, Plylar-Moore wrote a song to connect a biblical story to what she was seeing and hearing around her. “It is also important to mention one song called ‘Susanna,’ which wasn’t part of the original show,” Ostrov says. “The story of Susanna is about a woman who is assaulted by these two men and then they turn the whole town against her. The song that Kristen wrote is sort of like #MeToo meets the Apocrypha. It is about Susanna raising her voice to speak about what’s been done and also what it means to be an ally because Daniel joins her in her plight.”

Plylar-Moore has been inspired by an artist beit midrash that she attends at a synagogue in Manhattan. Through the program, she has studied new texts and met other artists in the New York Jewish community. The ensemble also performed at the synagogue in early May.

“There is a song in the show called The Ark, which was inspired by a talk that our rabbi gave after the election about how we need to build an ark that can fit everyone and withstand the storm together,” Plylar-Moore says. “The opening song, ‘Tent Revival,’ is rooted in the book of Isaiah, and the instructions that when you raise your tent, drive your stakes deep, draw your ropes wide, so make it very firm, but make sure that there is room for anyone who wants to join, and that is our duty and responsibility to each other.”

While the ensemble has been performing in New York City for more than a year, members are excited to share their full album this summer. “The music on the album is not naive, rather it is helpful with the understanding of all of the challenges and difficulties that we face in this world today,” Ostrov says. “It is nonetheless persisting as being unequivocally hopeful. I love this music; it makes my heart glad to hear it, and I want that to be shared, and I hope that it makes other people feel the same way.”

END_OF_DOCUMENT_TOKEN_TO_BE_REPLACED

Aimee Ginsburg Bikel, Theo’s wife and director of the Theodore Bikel Legacy Project, gives us an up-close and personal look at the man behind the legend. Aimee shares stories about Theo’s life, from his acting roles to a sampling of his folk music, as well as his passion for tikkun olam (repair of the world). Aimee also presents an excerpt from her recently released book, Theodore Bikel’s: The City of Light, which recounts moments from Theo’s childhood in Vienna.

END_OF_DOCUMENT_TOKEN_TO_BE_REPLACED

Broadway Performance Coach and Music Director Michael Lavine shares Jewish themed songs that are unfamiliar to many, including songs that were cut from the original Fiddler on the Roof. Actress Barbara Minkus who starred in the Broadway show The Education of H*Y*M*A*N K*A*P*L*A*N and the television show Love American Style, makes a special guest appearance.

END_OF_DOCUMENT_TOKEN_TO_BE_REPLACED

Leonard Cohen’s Final Testament: ‘Thanks for the Dance’

Leonard Cohen blended the sacred and the profane in his own search for a deeper meaning—finding truth in the Torah, yes, but also in sex, travel and the simple thrill of artistic creation.

END_OF_DOCUMENT_TOKEN_TO_BE_REPLACED

“I get paid to go to YU,” said Joy Ladin, an openly transgender professor at Stern College, in her speech. “But queer students are paying to be trashed in classes to have humanity denied, to have halacha warped around values of homophobia and xenophobia and transphobia, rather than values that recognize that every kind of human being is created in the image of God.”