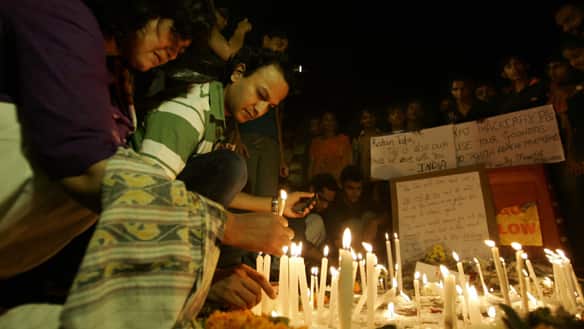 All our Thanksgiving weekends were touched with sadness as news from Mumbai interrupted what should have been cheery days watching football and spending time with family. The details of the perpetrators’ motivation and planning are still being worked out, but we know a number of attackers landed via boat at Mumbai on Wednesday and attacked specific locations around the city, from malls to cafes to train stations. The most publicized was a siege at the Taj Mahal Hotel that lasted until the weekend.

We at Moment were particularly aghast when we heard that one location the attackers targeted was the Lubavitch Chabad center. The bodies of six Chabad center victims–Chabad emissaries Gavriel and Rivka Holtzberg, Yocheved Orpaz, Ben-Zion Kruman, Aryeh Leibish Teitelbaum and Norma Schvartzblat-Rabinowitz–were flown to Israel today for burial.

As for an official response, Israeli Prime Minister Yehud Olmert and the Shin Bet cleared India for all responsibility, despite recent reports indicating that counterterrorism forces in Mumbai were woefully unprepared, and even praised the rescue efforts.

Olmert also spoke of the terrible associations we all have when we hear of terrorists targeting Jews. His comments were poignant and, sadly, too true:

“The images of the Jewish victims and the horrific sight of the Chabad house managers wrapped in prayer shawls are shocking and take us back to images from history that we hoped wouldn’t repeat themselves,” Olmert said. “But it seems that the hatred of Jews and Israelis is what spurs these horrible deeds.

Jewish news agencies and blogs have been all over the attack. Here’s a smattering of what they’re talking about:

END_OF_DOCUMENT_TOKEN_TO_BE_REPLACED

A Eulogy for Rivka and Gavriel Holtzberg

Facebook Twitter Pinterest linkedin Telegram
By Benjamin Schuman-Stoler This eulogy for Rivka and Gavriel Holtzberg found its way to us at ITM and we think it's worth sharing wi...