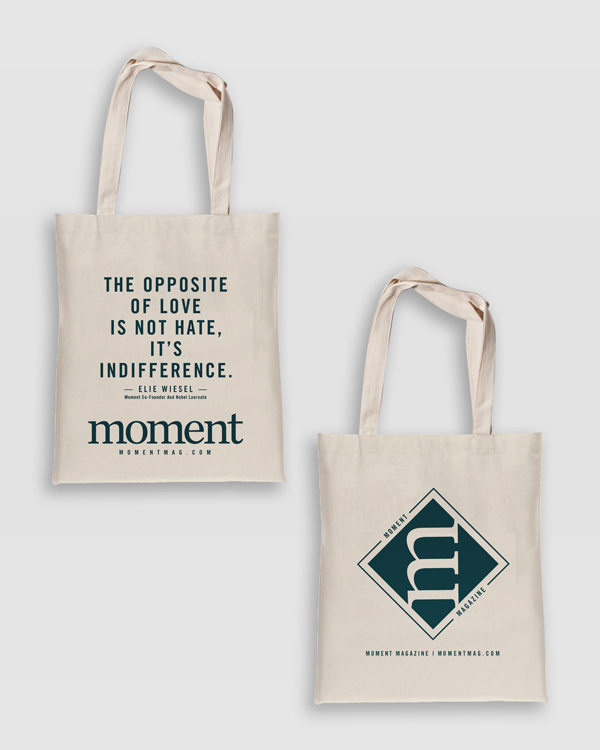 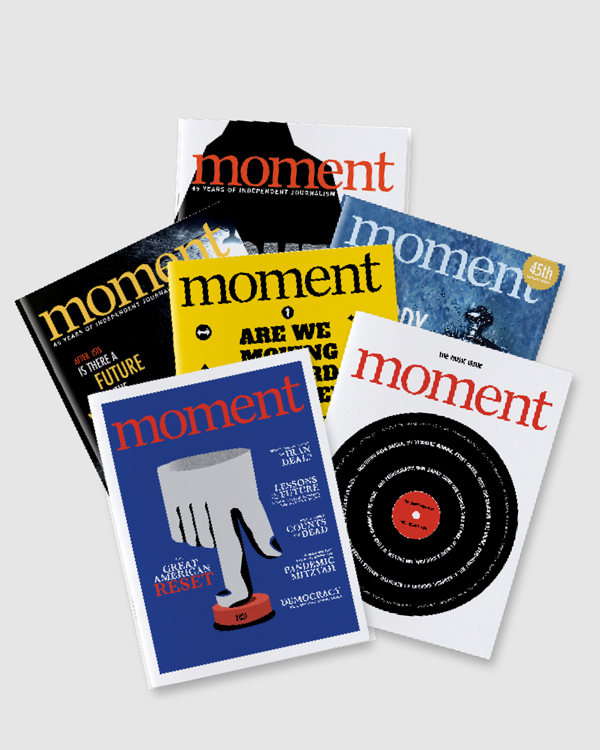 Nine Lives: Favorite Profiles of Famous People from the annals of Moment Magazine

Have a coupon? Click here to enter your code 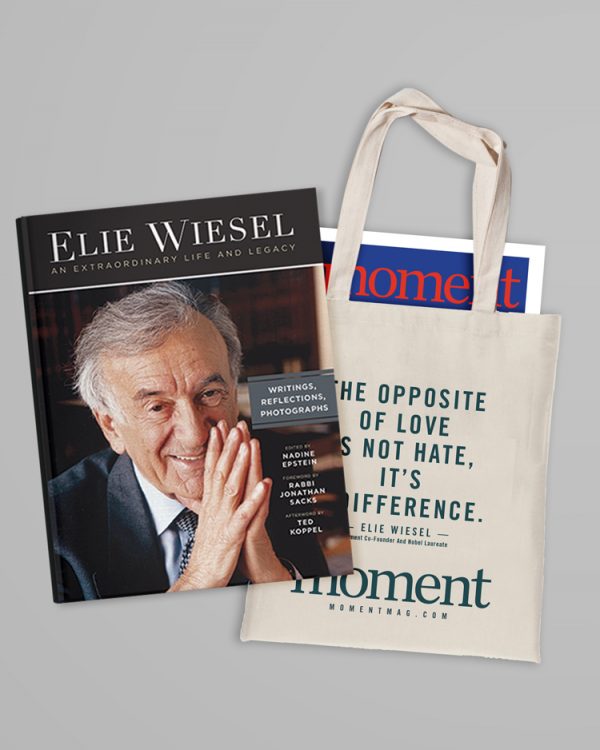 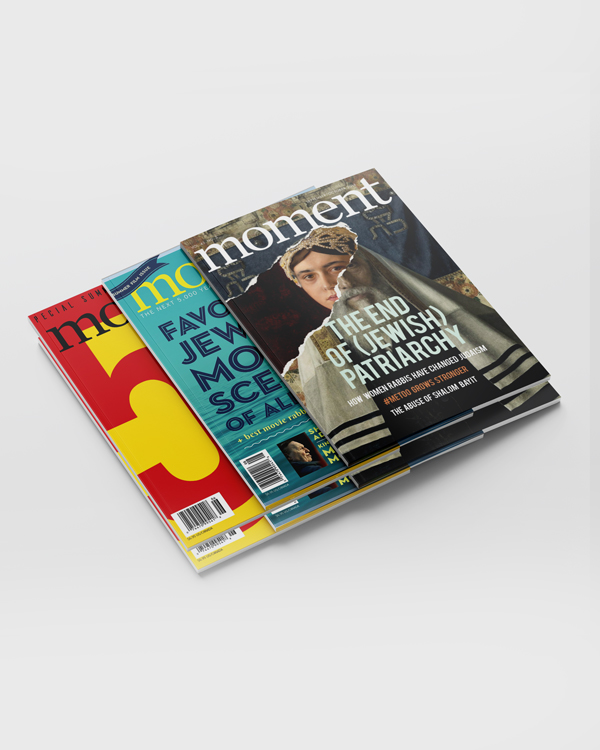 Purchase this important book and a subscription to Moment Magazine

and you will receive a FREE tote*

Elie Wiesel (1928-2016) is best known as the author of Night, survivor of Auschwitz and a powerful, enduring voice of the Holocaust. A recipient of the Nobel Peace Prize and the Presidential Medal of Freedom, he was a hero of human rights, professor and author of more than 50 books.

Among his accomplishments, Wiesel co-founded Moment Magazine with Leonard Fein in 1975 to be a place of conversation for America’s Jews. For Editor-in-Chief Nadine Epstein, he became a mentor and friend after she took over the magazine in 2004.

MOMENT - the home for the intellectually and Jewishly curious - is an independent magazine that illuminates the complexities of the literary, political, cultural religious nuances of the Jewish world. 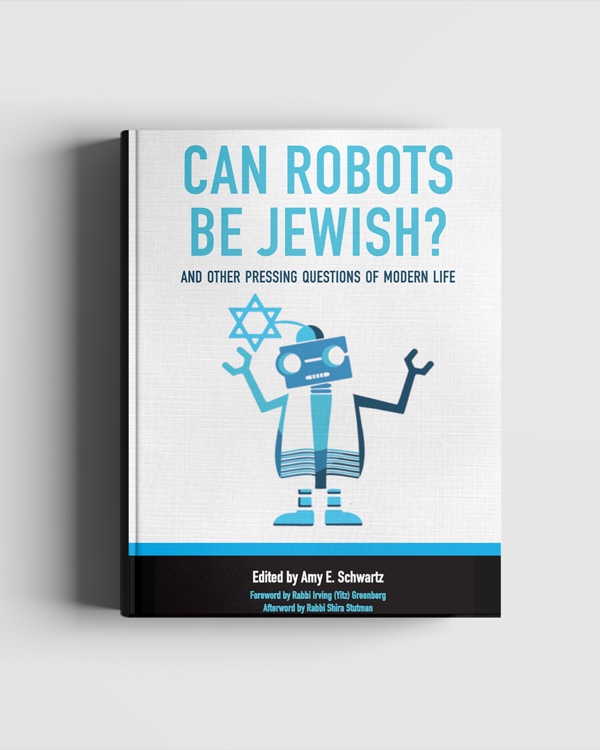 Can Robots Be Jewish? Order now!

$24.95
Can Robots Be Jewish? And Other Pressing Questions of Modern Life
Should we edit our children's genes?  Are there things that can't be forgiven?  Are Jews still expecting a messiah? Is Judaism good for women? Should Jews strive to be happy?  Do Jews believe in the afterlife?  Can robots be Jewish?
In this book, rabbis spanning the range of modern Jewish thought, from Humanist and Reform to Orthodox and beyond, consider these difficult and provocative questions and many others. Sometimes they agree - but not often. Editor Amy E. Schwartz provides delightful commentary, celebrating the rabbinic impulse to question every assumption and highlighting the many and sometimes surprising ways ancient texts can speak to us today. Listed by the Religion News Service list 0f "The most intriguing books on religion we read this year," Can Robots Be Jewish? is a must read!
Add to wishlist
Add to cart
Quick view
New 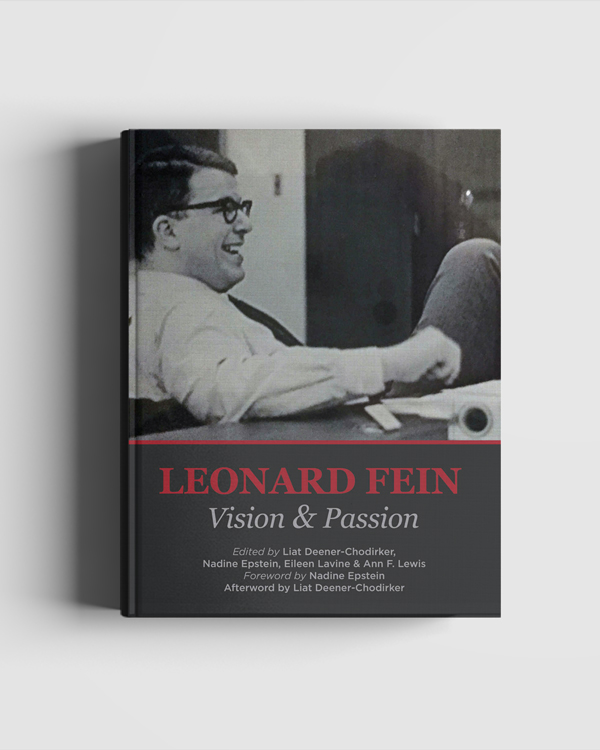 $2.99
Both a man of letters and a true activist, Leonard "Leibel" Fein never lost his abiding passion for serving the Jewish people. As Moment’s co-founder and editor from 1975 to 1989, he used the editor’s column regularly to write about his passions – social justice and ending racism and poverty, Judaism, Israel and the American Jewish community. The columns and essays collected here exemplify the intellect, the humor and the values that characterized his life.
Add to wishlist
Click here to buy it on Amazon!
Quick view 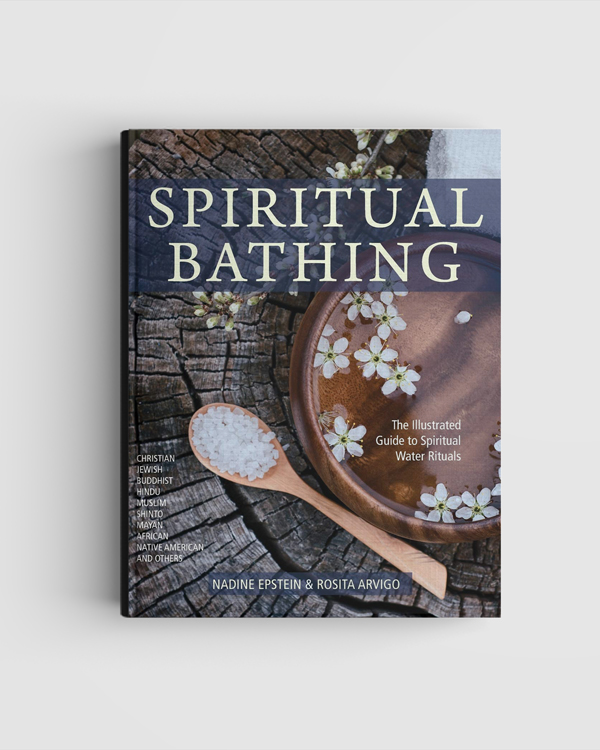 Healing Rituals & Traditions Around the World

$22.95
For centuries, people have used a combination of water, prayer, meditation and herbs to rejuvenate the mind, body and soul. In Spiritual Bathing, Rosita Arvigo and Nadine Epstein explore traditions—many lost or forgotten—that have been intertwined with religion, spirituality and culture since ancient and medieval times. From baptism to mikvahs to charity baths, these traditions can serve as a way to reconnect with nature or God; rejuvenate the mind, body and soul; and help relieve anxiety, insomnia and depression. Encompassing knowledge from 15 world traditions, this beautifully illustrated guide features detailed instructions to create nurturing and restorative spiritual bathing rituals both at home and elsewhere.
Add to wishlist
Add to cart
Quick view

From: $36.00
Give A Jewish Military Member the Gift of Moment! Together with the Jewish Chaplains Council, Moment is launching an exciting project to
Add to wishlist
Select options
Quick view 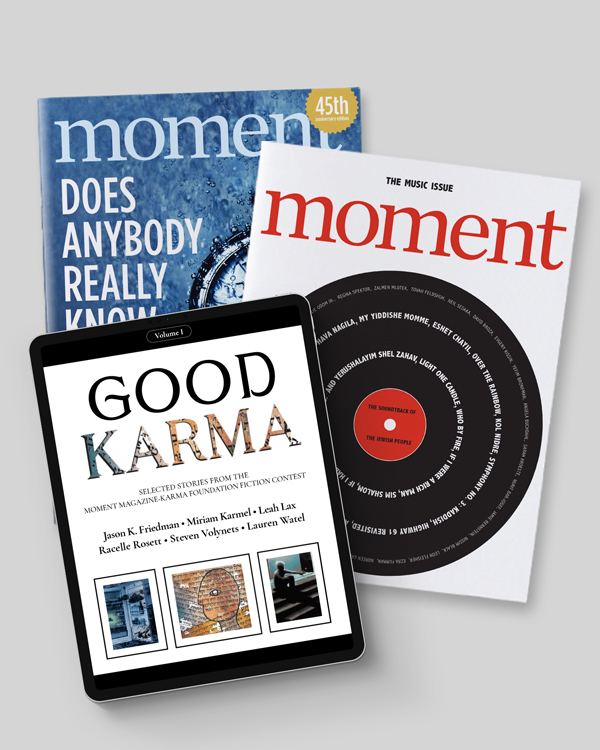 Subscription…for Yourself or For a Gift

$19.95
MOMENT – the home for the intellectually and Jewishly curious – is an independent magazine that illuminates the complexities of the literary, political, cultural religious nuances of the Jewish world. The special introductory one-year subscription offer includes: Buy it for yourself or as a gift! (If this is a gift, please indicate  your recipient's name, email and mailing address in the "Order Notes" section during check-out.  And please remember to tell us if the subscription is a gift:)
Add to wishlist
Add to cart
Quick view 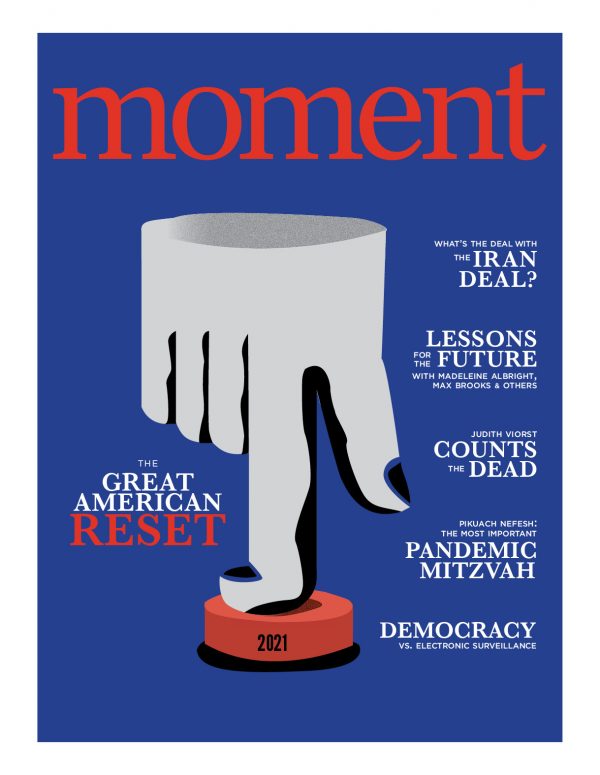 $6.95
Moment’s office is located in Washington DC, and yesterday we were forced to end our editorial meeting early when armed white nationalists overran the U.S. Capitol as members were meeting to certify the results of the presidential election. Staff members needed to pick up children from day care and everyone had to be settled safely at home before the 6 p.m. curfew. It was shocking, but I wasn’t the least surprised by the violent turn of events—it was the logical result of Donald’s Trump’s fomenting of white nationalism since 2016 and four years of political turmoil. (I was surprised that federal law enforcement was not prepared for the onslaught, but that’s another story.) What has happened in the last few days has everything to do with the theme of our new issue, “The Great American Reset.” Every four or eight years, the United States has the opportunity for a political reset. This resetting is one of the truly exceptional things about American democracy. We take it for granted, but the chance to bring in a different set of leaders is by no means inconsequential. Now, we have been harshly reminded that it is not as automatic as we have come to believe. Sometimes, the reset is partial, a slight reconfiguration of leaders. This time, given the results of the Georgia senatorial run-off, it will be more dramatic. But it is not just leadership that needs to—and will—begin anew. Each one of us needs to do what we can to weave the country back together again, transcending paralyzing political polarization to build trust person to person. In my column in this issue, I suggest a few ways to do this. We check in with American Jews to see what they are thinking: They have a lot to say about the state of the Republican and Democratic parties, as well as the nation. Sarah Posner dives into the danger of QAnon, which has rebooted anti-Semitism for the 21st century. (We saw the consequences of conspiracy theories such as QAnon in action yesterday.) Marshall Breger writes about how recent Supreme Court decisions permitting worship in churches and synagogues despite COVID-19 restrictions have drawn ultra-Orthodox Jews into a culture war that is  “none of their business.” We also explore the Jewish concept at the heart of heated discussions about worshiping, mask wearing, social distancing and even vaccinations: pikuach nefesh, the principle in Jewish law that the preservation of human life overrides virtually any other religious rule. Five Iran experts—Mark Dubowitz, Chuck Freilich, Efraim Halevy, Dalia Dassa Kaye and Sharon Nazarian—weigh in on one of the major foreign policy challenges that the new administration will immediately face, and discuss—from different perspectives—whether the U.S. should revive the Iran deal, double down on sanctions or try something totally new. We also explore another pressing issue: whether electronic surveillance threatens democracy; and our rabbis address the question of whether Jewish ethics permit unlimited electronic surveillance. In “Lessons for the Future,” Pulitzer-prize winning New York Times writer Tom Friedman hopes we can recover our “cognitive immunity,” a shared sense of the truth that defined us for so many years. Former Secretary of State Madeleine Albright, author Max Brooks, German Ambassador to the U.S. Emily Haber  and NPR’s Michel Martin also share their thoughts. In “The Failure of Impartiality,” Robert Siegel reviews Barack Obama's Book, A Promised Land. There’s lightness in our new issue too. Did you know President-elect Biden’s nominee for U.S. Secretary of State Anthony Blinken's great-grandfather was famed Yiddish writer Meir Blinken? And there’s “Counting the Dead,” a lovely essay by author Judith Viorst. Plus all the fun features you rely on for relaxation: a Persian-inspired recipe for Purim, cartoon contest and Spice Box. Print and digital subscribers will receive this beautiful and thoughtful issue soon. If you are not already a subscriber, subscribe here. Not all stories are posted online so subscribing is the best way to make sure that you don’t miss anything. With so much going on, lots of new stories and updates are on the way.   —Nadine Epstein, Moment Editor-in-Chief
Add to wishlist
Add to cart
Quick view