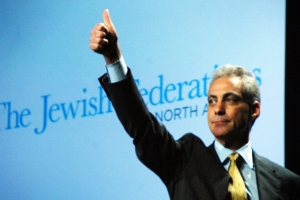 “I have not seen a crowd this size since my bar mitzvah,” Rahm Emanuel announced before launching into his talk for the General Assembly of the Jewish Federations this afternoon. Emanuel addressed the crowd of over 3,000 Jews in place of President Barack Obama, who canceled in order to attend a memorial service in Fort Hood. Following a speech that was (most likely) drawn from Obama’s prepared one, Emanuel pledged the White House’s unwavering support of Israel. Calling this “a time of peril but also of opportunity,” he added that “no one should allow the issue of settlements to distract from the overarching goal of lasting peace.” Emanuel seemed to be coming to the conference both as an insider and an outsider, sticking with Obama’s message but becoming emotional when describing his Israeli father, his childhood trips to Israel and the upcoming Bar Mitzvah of his son in Israel. He added that he would be taking $18 dollar checks for the celebration at the door.