If you’re one of those people with an ever-lengthening list of books to read, our new summer books symposium—which asks Jewish thinkers of note to recommend “five books to make you an educated Jew”—should drive you enjoyably crazy. You may find yourself wanting to acquire and read every one of these books. Or you may decide, sensibly, that that’s too ambitious, and pick just a few. But how to choose? You can be old-fashioned and pick something you think you’d like. But why not try something more advanced, and pick your next read by applying sports-style analytics? For instance…

Our 24 thinkers (12 men, 12 women) recommended a total of 87 different titles by 72 authors. Of the authors, the obvious high scorer was God. His masterwork, the Hebrew Bible, was picked in whole or in part by no fewer than 10 contributors (Shulamit Reinharz, Jerome Groopman, Richard Zimler, Judea Pearl, Ruth Wisse, Bob Mankoff, Lawrence A. Hoffman, Allan Nadler, Dara Horn, Evgeny Kissin) while the section of the Mishnah (thought to be divinely inspired) known as Pirkei Avot, or Ethics of the Fathers, was cited by an additional three (Ruth Wisse, Wendy Shalit and Jerome Groopman). No other individual book title, sacred or secular, received more than two nominations. An overwhelming if not completely surprising win. 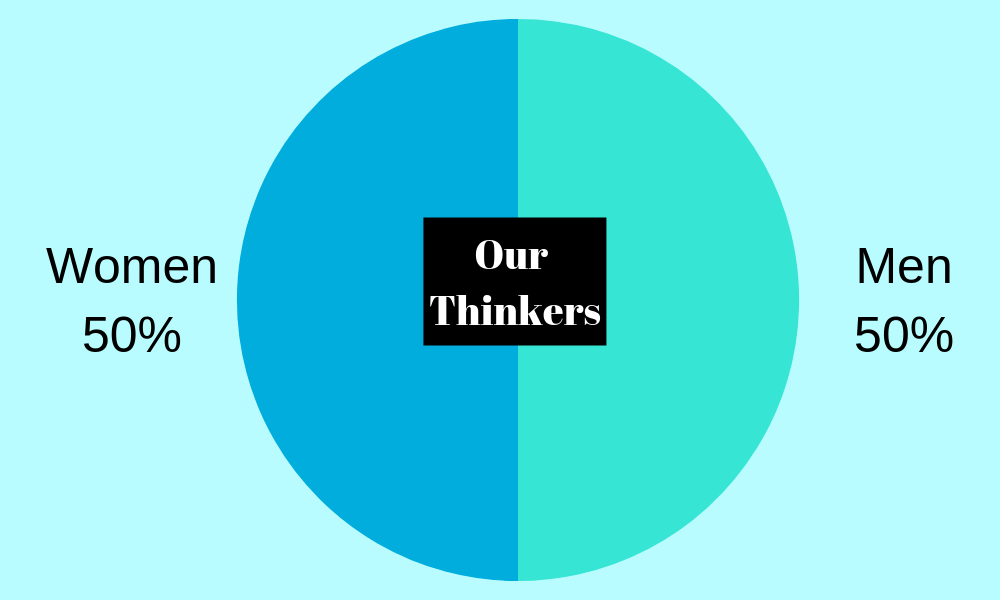 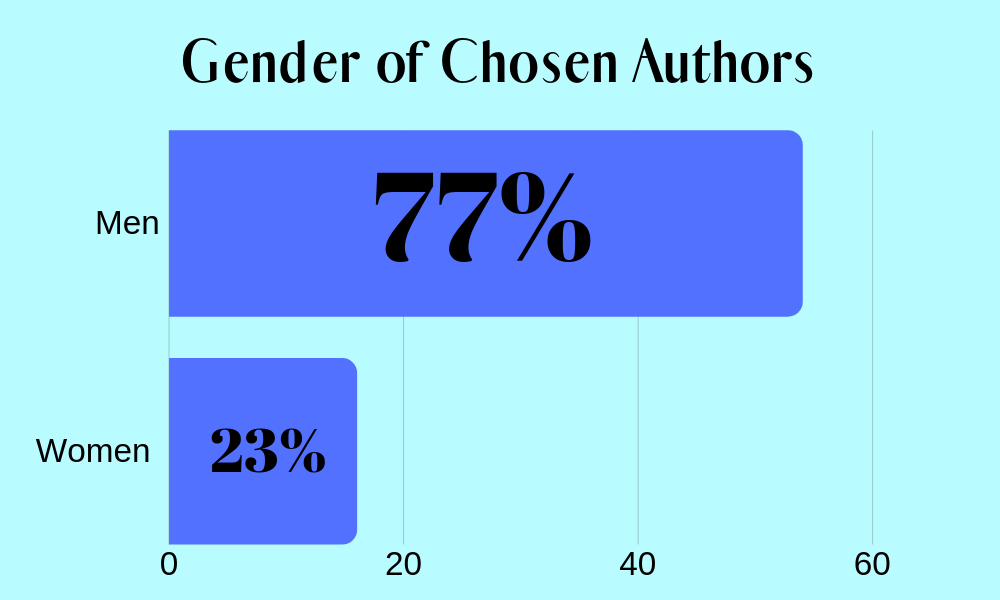 Other recommended works by the same author, or at least considered part of sacred scripture, included the Babylonian Talmud (chosen by Lawrence Harrison), the Haggadah (Yehuda Kurtzer) and the Zohar (Kissin), not to mention the Siddur or prayer book (Allan Nadler and Ruth Wisse). (Depending on how far you stretch the boundaries of this category, you may want to include Judith Shulevitz’s choice, The Gospel of Mark. But your call.)

Overall, then, the Almighty tops the stats both for most popular book and most titles. But the runner-up is Abraham Joshua Heschel, who gets four picks for three different titles. Two players (Eric Yoffie and Edward Hirsch) picked Heschel’s Moral Grandeur and Spiritual Audacity, one (Peter A. Geffen) chose The Prophets, and one (Michael Twitty) chose The Earth Is the Lord’s: The Inner World of the Jew in Eastern Europe.

While Heschel was the only non-divine author to receive four mentions, a couple of authors came in with three: Maimonides (with two cites for his Mishneh Torah, and one for Isadore Twersky’s A Maimonides Reader), Hayim Halevi Donin (two people chose his To Pray as a Jew and one his To Be a Jew) and Philip Roth (two Operation Shylock and one I Married a Communist).

This somewhat motley crew edged out Sigmund Freud, who hit a double (with Richard Zimler picking The Interpretation of Dreams and Bob Mankoff picking Jokes and their Relation to the Unconscious), Gershom Scholem (two picks for Major Trends in Jewish Mysticism) and Yosef Hayim Yerushalmi (two picks for Zakhor: Jewish History and Jewish Memory). A special achievement award goes to Ruth Wisse, whose The Modern Jewish Canon made Allan Nadler’s list and No Joke: Making Jewish Humor made Bob Mankoff’s, and who also was on our list of list-makers—but who declined to make a proper list herself, suggesting instead that readers should read books that make them capable of laughing at Tevye’s jokes in the Tevye the Dairyman stories by Sholem Aleichem.

Histories vs. novels—or, what game are you playing?

You can play the numbers game with forms instead of titles. The categories get a little slippery here, but the big score goes to works of philosophy, theology and mysticism, including titles by Judith Plaskow, Martin Buber, Hannah Arendt, Eliezer Berkowits, Abraham Isaac Kook, Heschel, Gershom Scholem, Jill Jacobs, Alan Lew, Louis Jacobs, Eugene B. Borowitz and Frances Schwartz.

Works of Jewish law and commentary also do very well: As noted above, the Mishneh Torah of Maimonides was another twofer, with additional votes for commentaries on the Torah by Shai Held, Michael V. Fox, Rashi, Avivah Gottlieb Zornberg, Ellen Frankel, the Chofetz Chaim,  Bahya Ibn Paquda and Abraham Isaac Kook. 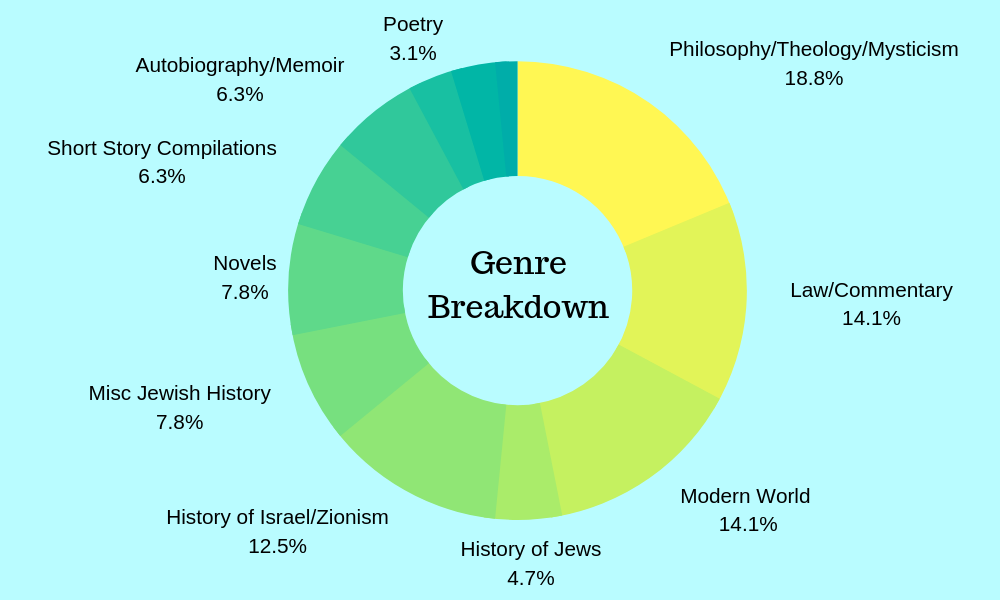 There’s a closely related subcategory here that focuses on the role of Judaism and Torah in the modern world, which might (depending who’s scoring) include David Hartman’s A Living Covenant, Judith Plaskow’s Standing Again at Sinai, Morris N. Kertzer’s What is a Jew? Aaron J. Hahn Tapper’s Judaisms: A Twenty-First-Century Introduction to Jews and Jewish Identities, Eugene Borowitz’s Choices in Modern Jewish Thought, Richard Siegel and Sharon and Michael Strassfeld’s The Jewish Catalog, and Jonathan Sacks’s A Letter in the Scroll.

Other numbers? We clocked the following:

Have we left out some categories and stray titles? No doubt. Send us your counts and picks!