Four large and heavy commemorative bronze plaques wait in storage at the Praia airport in Cape Verde, an archipelago of ten tiny islands 300 miles off the coast of Senegal in West Africa. They’ve come from Liverpool, England and are headed to two Jewish cemeteries on Cape Verde’s western most island, Santo Antao, targeted for restoration by the Washington, DC-based Cape Verde Jewish Heritage Project. The cemeteries are protected as Historic Patrimony under a new law by the Cape Verde government. “The cargo will be flown to Sao Vicente, picked up and put on a ferry to Santo Antao and delivered by four-wheel drive on a one-hour road trip to Ponta do Sol,” says Carol Castiel, founder and director of the project, which since 2007 has spearheaded the restoration of four Jewish burial grounds on three Cape Verde islands.

A ceremony to install the plaques in the Santo Antao cemeteries is scheduled for November. They will mark graves of Jewish settlers who came to Cape Verde in the mid-1800s from North Africa. Castiel first became interested in their history when she noticed Jewish surnames such as Cohen, Anahory, Auday, Benoliel, Levy, Pinto and Wahnon among her non-Jewish students in the USAID-funded scholarship program for Portuguese-speaking countries in Africa she administered in the late 1980s for the African American Institute in New York.

She followed those Jewish names to a Catholic cemetery in Praia, the Cape Verde capital, where the Sephardic graves were grouped together. Her guide, Januario Nascimento, himself a descendent of the Auday family, showed her the resting place of his relatives, where the headstones were sinking into the ground. Castiel feared they would be lost and offered to be his advocate in the United States and help raise funds for restoration. 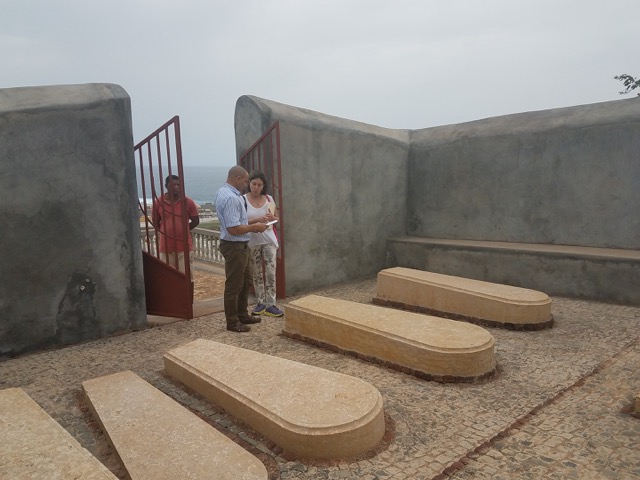 Carol Castiel, President of the Cape Verde Jewish Heritage Project with Ribeira Grande Deputy Mayor Francisco Dias, discussing plans on the final restoration efforts at the Ponta do Sol Cemetery, one of two Jewish burial plots in the municipality restored by the project. (Credit: CVJHP)

Ponto do Sol Cemetery before and after restoration. (Credit: Carol Castiel)

Four cemeteries were identified for restoration. Modeled after Jewish burial grounds in Morocco, each has white horizontal stones with inscriptions in Hebrew and Portuguese. All, like in Praia (restored and dedicated in 2013) had languished, and were in various stages of deterioration. One was overrun with grasses and weeds, so much so that the graves were barely visible. The cemetery in Boa Vista sits close to the sea and is subject to erosion. Road and building construction have also taken their toll.

Restoration is a priority. So is history. Angela Sofia Benoliel Coutinho, whose Benoliel surname puts her squarely in the descendants group, got her doctorate in contemporary African history from the University of Paris, Sorbonne. Born in Portugal of Cape Verdean parents, Benoliel Coutinho lived in Cape Verde as a child and at age eight was sent back to Lisbon, where she lived with her grandmother, who told her about her Jewish heritage, and her great grandfather’s parents, Abraham Ben Oliel and Esther Benatar. They were buried in Boa Vista in the early 1890s. According to family lore, Benoliel Coutinho’s great uncle David Ben Oliel had supplied food and other aid to Cape Verdeans during the global economic depression that hit the county in the late 1930s. 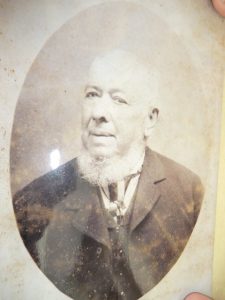 Archival records find that about 100 Jewish settlers immigrated to Cape Verde. The small Jewish cemeteries scattered in the islands contain dozens of graves. Cape Verde’s population hovers around 550,000. Among them, more than 1,000 claim Jewish ties, an identity which is held in high esteem even through no Jewish community exists to support them.

But how and why did Benoliel Coutinho relatives, and others like them, make their way to Cape Verde?

Benoliel Coutinho is scouring the archives in Cape Verde, Portugal, England and Gibraltar for some answers. Driven by the Inquisition from Spain and Portugal in 1492 and 1496 respectively, many Jews fled to North Africa and lived there and throughout the Ottoman Empire for hundreds of years. Benoliel Coutinho says it was a confluence of events in the 19th century—the end of the Portuguese Inquisition in 1821, and the economic treaty between Portugal and England in 1842—that sent Jewish Moroccans to the seas in search of greater religious freedom and a better life. “Cape Verde became an important commercial hub between the Americas, Africa and Europe,” she says. Her ancestors were merchants, a role, she notes, that Jews have played historically. 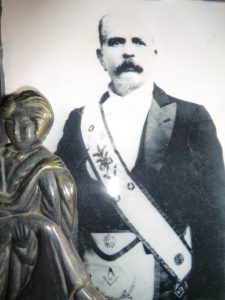 Isaac Pinto is son of Jewish immigrants from Tangier who came to Cape Verde in the 1840s. Affiliated with the Mason fraternal brotherhood, he died on October 5, 1921 and was buried in the Ponta do Sol cemetery. (Credit: descendent family photo)

Morocco also traded with England, which Jews turned to their advantage. In 1912 when Morocco became a French colony, Jews, considered “indigenous,” were limited in their seafaring activities under the French flag. Benoliel Coutinho says those that left for nearby Gibraltar or were already living there under British sovereignty arrived in Cape Verde with British passports. Jews under Portuguese rule in Cape Verde enjoyed considerably better treatment and freedom as merchants and traders.

The new Jewish arrivals were largely single men; they married Catholic women and quickly assimilated. They never built a synagogue, but according to Jewish tradition, they did build cemeteries. “The way you care for the dead is a higher calling, a greater responsibility,” says Castiel. “It’s the first thing that Jews do when they go to a new place, which deeply spoke to me,” she remembers.

If the tombstones could talk they would tell stories like the kind that Castiel heard from descendants she interviewed. “In a village called Sinagoga, on the Island of Santo Antao, it is said that Jews gathered to pray even if no vestige remains of an actual synagogue,” she writes. Daniel Brigham, a prominent businessman in the Praia, the capital, told Castiel, “When I was 10 years old, I witnessed my grandfather’s Jewish burial. Although I am not religious, I try to follow the Ten Commandments. I’d like to think that I conform to the basic tenets of the Jewish faith. I am very proud of the fact that I have a Jewish rib.” 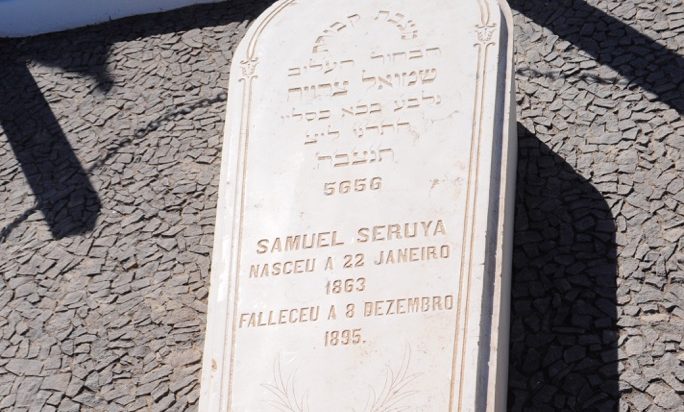 Tombstones in cemeteries in the Cape Verde islands are modeled on those of their Jewish ancestors in Northern Africa. (Credit: Carol Castiel)

This is the same way Cape Verde Ambassador to the United States Carlos Wahnon Veiga describes his Jewish history. “My grandfather on my mother’s side was Jewish, who came to Cape Verde from Gibraltar in the mid-1840s. He died before I was born and his grave was lost,” which may be why he is so committed to saving others and supports cultural tourism. “It is not only our national heritage, but we’d like visitors from all over the world to see these cemeteries.” He hopes some will come from Israel, where Ambassador Veiga says he was just appointed to serve as Cape Verde’s first ambassador of Jewish descent. It is a non-resident appointment, as he will remain the ambassador from Cape Verde in the United States.

When Castiel promised Januario Nascimento several decades ago that she would help, she never faltered. “We want Cape Verdeans to know about the Jews who are part of their multi-cultural identity.” But for her it is even more personal. “So, why,” she asks, “is an Ashkenazi Jew from a small town in Pennsylvania restoring Jewish cemeteries of Moroccan Jews in Cape Verde Islands?” She says she feels a sense of responsibility that she can’t escape. “It has a lot to do with my strong identity as a Jew, my love of Sephardic heritage and my absolute fascination with this Lusophone and Sephardic world. This is my mission.”

As Castiel skillfully navigates the Cape Verde Jewish Heritage Project through restoration, she says that the work is far from done. “The Jews of Cape Verde are part and parcel of the global Jewish Diaspora and deserve to be documented, honored and remembered. It is our obligation as Jews to maintain these sacred grounds.”