In ‘Quiet For Too Long,’ Solvej Schou Gets Loud

Solvej Schou is a Jewish musician, writer and feminist. Her art and politics are largely inspired by her family—particularly her grandmother, who was a Holocaust survivor from Poland. The Los Angeles-based musician released her second solo album, Quiet For Too Long, last month, and it was named album of the week by LA Weekly. The release was timed to coincide with the 100th anniversary of the 19th amendment, a move which, like much of the album, speaks to Schou’s feminist politics. The album’s themes, which cover political and personal topics from police brutality to women’s body image to mental health, have an urgency inspired by current events. They are complimented by Schou’s music, a kind of bluesy rock ‘n’ roll influenced by famous female musicians from Patti Smith to PJ Harvey to Aretha Franklin.

Schou speaks with Moment about writing her new album, her politics and how her Judaism influences her art and activism.

Could you tell me about your background as a musician and writer?

I started off writing poetry and short stories when I was a kid, growing up in Los Angeles, then graduated to songwriting in junior high and high school. I started performing at that time, too. I moved to New York City and was a creative writing major at Barnard College, Columbia University, and then I got my graduate degree in journalism from USC back in L.A. I wrote about music for my college magazine at Barnard, as well as playing and organizing shows. As a longtime professional writer, I’ve written about and interviewed artists including Aretha Franklin, Patti Smith, Katy Perry, Ringo Starr and Brian Wilson, and I contributed essays on Patti Smith, PJ Harvey and Sharon Jones to the 2018 anthology Women Who Rock: Bessie to Beyoncé. Girl Groups to Riot Grrrl. All while playing my own music. Music and writing have always kind of dovetailed together for me.

Your new album came out last month. Could you tell me a bit about the writing of that album and the inspiration behind it?

I wrote “America”—which is the first song on the album, and a fairly political song—after hearing about so many instances of police brutality against men and women of color. That song came out of my reflections on that and on American identity, as well as touching on my grandmother, who was a Jewish Polish Holocaust survivor. She and my late mom came as refugees to the U.S. when my mom was a baby. My mom was born in a relocation camp in Germany post-war. My grandmother was the strongest person I’ve ever known; she really embodied the sense of the American dream, coming here as a refugee and an immigrant and building a life, and coming from deep trauma as a Holocaust survivor. When I wrote that song, all of these elements kind of rolled together.

The song “Age and Beauty” came out of me being a feminist and thinking about women and aging, and perception, and wanting younger and older women to feel strong in their voice and their identity as women, regardless of how you’re looked at for your physical appearance. I wrote the song “Stardust Hero” the night that David Bowie died. That’s the last song on the album. I’ve always been a huge fan of his music. I grew up listening to his records because of my dad. He’s a huge music lover and also a really great singer and guitarist. The basic crux of the lyrics of that song came to me the night of his death. Then there are other songs like “Flicker Away,” which is about anxiety and depression. “In a Minute” is basically about death. I never shied away from writing about intense material. It’s my way of getting out everything that I’m grappling with. Writing is an internal and solitary process, and then when you’re singing, everything is exploding out of you into the universe. 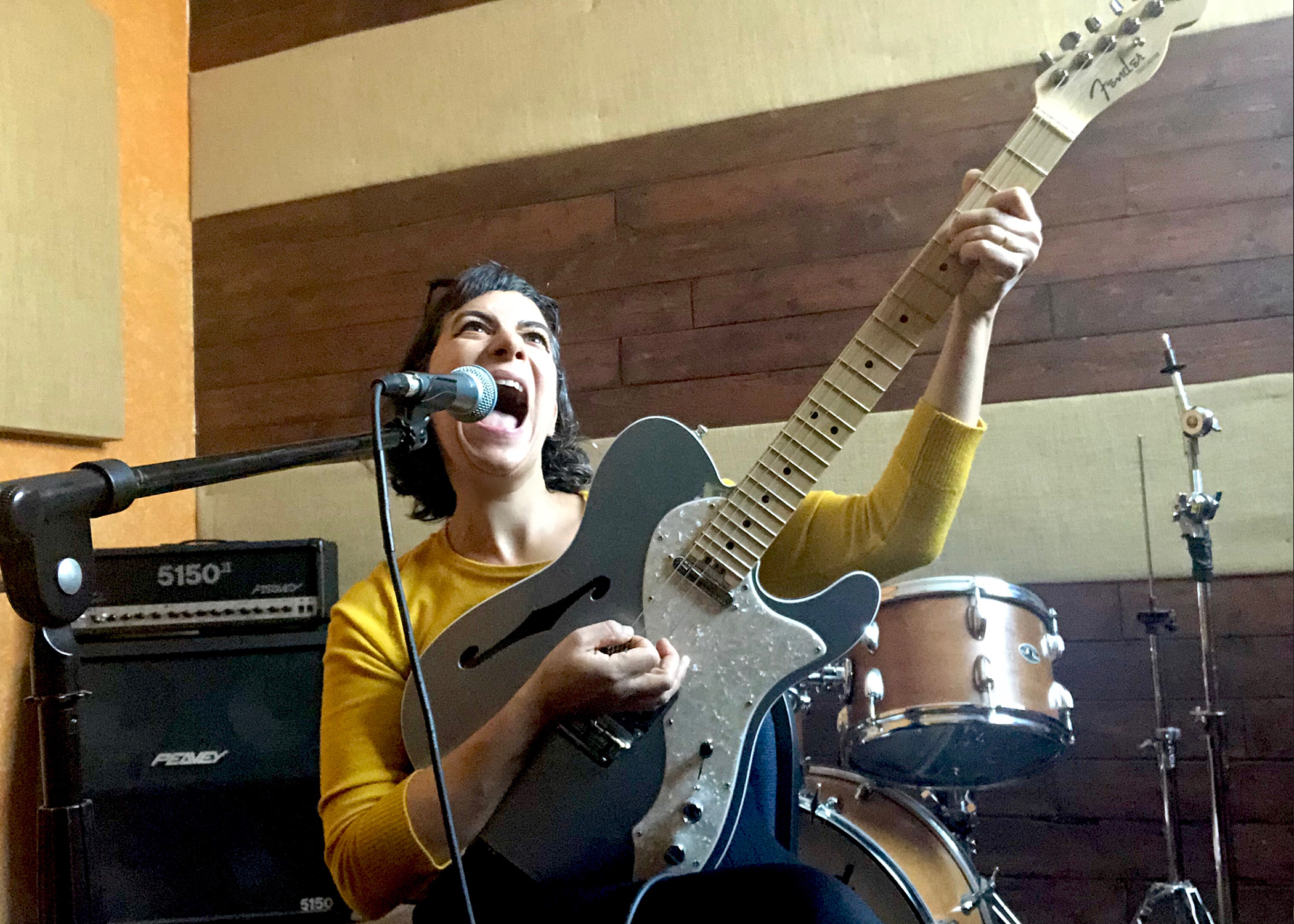 Going back to “America,” have politics always been a big part of your art, or is that a recent change influenced by current events?

I grew up in a very liberal family. My dad is from Denmark, from a social democracy. My mom died when I was nine years old, a week before my tenth birthday. She was pretty political; I grew up going to pro-choice rallies and desert protection rallies. I was in activist groups in high school and college, going to protests on the east coast. So I did fold that in to my music, especially the feminist aspect. Being a feminist has always been a part of my music.

Being a bit more decisive with a song like “America”—I would say that has been a little more recent, but politics have always been in my life. When I was a journalist at more mainstream outlets, I couldn’t be as open about my politics. That just goes along with journalism. Moving a little bit away from that and into a different realm of writing, I’ve been more able to be open, which is very freeing. The name of the album is Quiet For Too Long, which is a line from the song “America,” but it’s also how I have felt in many ways.

How does your Jewish identity affect your work as an artist?

I have a hybrid identity. I don’t fit into a box as Jew, as an American, or as a human being, and I never have. So my Jewish identity is very particular. My mom’s side of the family is very Jewish. My dad’s side of the family is Christian and Danish, and he is atheist, and then my stepmom is an episcopal priest. I was raised with my grandmother going to temple on the High Holidays. I am Reform agnostic, so my cultural identity has always been firmly Jewish. But like a lot of Reform agnostic Jews, I’m not as religiously identified. I do celebrate the High Holidays and Passover.

So I have a lot going on in my family, but my cultural sense of identity, especially with my grandmother being a Holocaust survivor, is really Jewish. My grandmother’s history and my Jewish identity have folded into my music and my art. I’ve written quite a bit about her in essay form, poetry, short stories and also songs. 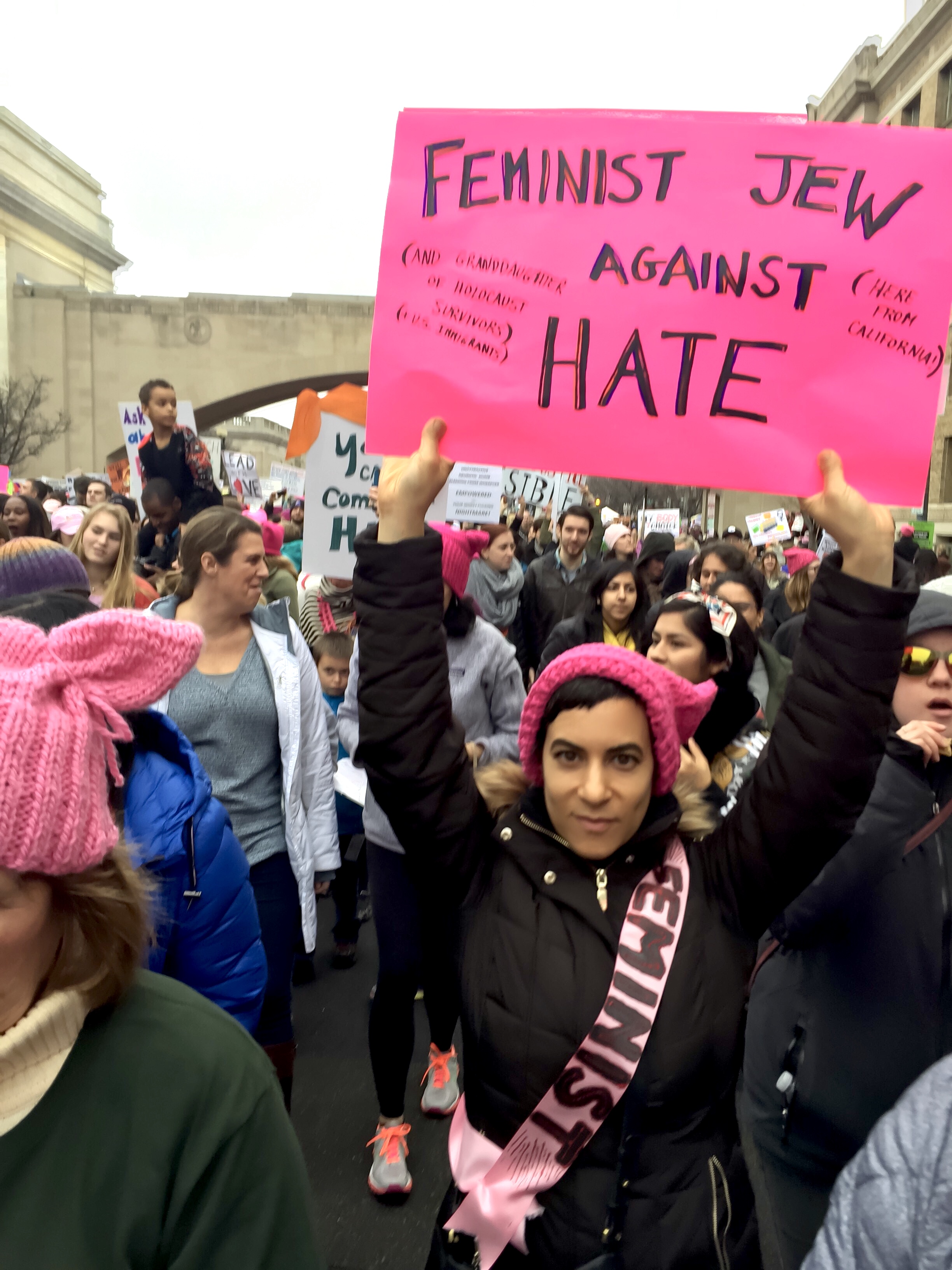 I went to the first Women’s March in DC in 2017, and the sign that I held said “feminist Jew against hate” on one side. And I put in smaller writing, “grandchild of a Holocaust survivor.” So I am pretty direct about that. A week after Donald Trump’s election, I wrote an essay in The Forward all about my grandmother’s history and my fear based on his election of all the things that he had promised to do that were xenophobic and anti-immigrant.

It sounds like Jewish women in particular have been a big inspiration for you. Do you view Jewishness and feminism as closely tied together?

I know so many strong Jewish women who are vocal and have an insane amount chutzpah that I can’t see Jewish identity and feminist identity not being tied together. I think that throughout history, and certainly in my own family, there is a legacy of strong Jewish women. They may not necessarily call themselves feminists, because not everybody does. My grandmother absolutely embodied a lot of feminist tenets and ideals without calling herself a feminist. I’ve called myself that since birth.

END_OF_DOCUMENT_TOKEN_TO_BE_REPLACED

Moment columnist since 1991, Letty Cottin Pogrebin, is a powerful voice for feminism in the Jewish world and beyond. Pogrebin, in conversation with Moment opinion and books editor, Amy Schwartz, discusses the state of feminism today and her dismay at how the miniseries Mrs. America portrayed her friend Gloria Steinem and represented the world of second wave feminism.