Every issue, we publish a cartoon (drawn by New Yorker cartoonist Ben Schwartz) and ask our readers to caption it. We wanted to learn more about our most prolific contest contributors. Read more participant profiles here.

Stephen Nadler is a 57-year-old physiatrist living in Princeton, New Jersey and working in Staten Island, New York. A lifelong cartoon enthusiast, Nadler devotes a solid portion of his free time to entering cartoon caption contests and blogging about them.

Attempted Bloggery details, among other personal notes and cartooning curiosities, every contest he has entered from The New Yorker to Moment. Nadler has been submitting captions to The New Yorker for some time, but he hasn’t seen much success for his entries, which compete with thousands of others each week. Five years ago, he discovered Moment’s bimonthly contest by way of New Yorker cartoon editor Bob Mankoff, who helped found Moment’s contest. The smaller competition quickly proved to be much more fertile ground for Nadler when one of his captions was selected as a finalist the first time he entered.

In fact, Nadler was a finalist for the first four Moment cartoon caption contests he entered. It was at this point that he had the chance to meet Bob Mankoff in person on a book tour and “The Mankoff Prophecy” was born. According to Nadler’s blog, he informed Mankoff that he had been a finalist in Moment’s competition four times, but Mankoff misunderstood and made out his inscription to Nadler, “For Stephen- the four time Moment caption contest winner!” Rather than mourn the mishap, Nadler resolved that his goal would be to make Mankoff’s words true. He began achieving it almost immediately, winning the fourth Moment cartoon caption contest he had entered.

Nadler has won more than enough of Moment’s caption contests to fulfill the prophecy since then. In the process, he has seen the competition change hands from Mankoff to Ben Schwartz, under whom he says the cartoons and finalist captions have become more explicitly Jewish, though not always. 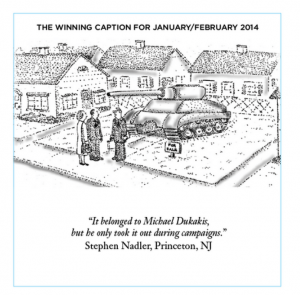 On his blog, Nadler reflects a lot about the evolution and mechanics of the contest. Since there is no limit to the number of captions a contestant can submit, an entry Nadler might not consider his best can be chosen as a finalist, which can be frustrating for him if he thinks another one might garner more favor when readers vote for the winner. All captions are submitted in a public commenting forum on Moment’s website, meaning other contestants can see each other’s submissions.

This made for an interesting dynamic when frequent entrants started commenting on each other’s captions. Nadler says they will compliment, constructively critique and even riff on one another’s humor. Occasionally, the conversations will veer off topic as far as the whereabouts of a regular who hasn’t posted in awhile.

The instigator is a man named Gerald Lebowitz, who will post frequently with jokes or notes, inspiring further commentary and conversation. It fosters an environment that is competitive in a positive way, Nadler says. It could almost be called a community if they had any contact whatsoever outside the forum of Moment’s cartoon contest comments section, but they do not. These regular contestants simply share a mutual interest in this specific niche of visual Jewish humor and motivate each other to write their best witticisms, keeping in mind that the competition is a low-stakes game of merit—may the best caption win.