David Simon and Ed Burns’ TV adaptation of Philip Roth’s novel The Plot Against America (which just completed its six-episode run on HBO) veered away from the novel’s text in several notable ways, creating new characters, adding new scenes and even changing the ending to match the current political climate. However, all these changes fall under one umbrella—point of view.

Roth’s 2004 novel is told from the perspective of 10-year-old Philip, a young Jewish boy born and raised in Newark, New Jersey. The reader only sees what Philip—who is a stand-in for Roth himself in this semi-autobiographical work—sees, limiting the information available to what is in his exact orbit, mostly that of his home. The only glimpses of the outside world come from newspaper articles or radio dispatches that Philip comes across.

However, the world of The Plot Against America is much larger than what Philip’s eyes observe. Two of the book’s primary characters—Aunt Evelyn (Winona Ryder) and cousin Alvin (Anthony Boyle)—live most of their lives in the outside world, subjecting their motivations and actions to the judgment of a 10-year-old child who only sees them in his home through their mostly negative interactions with his family. Viewed through that 10-year-old lens, Alvin and Evelyn become one-note characters. Alvin is just an angry and ungrateful brute, while Evelyn is portrayed as a power-hungry and naïve political animal without any clear motivation. 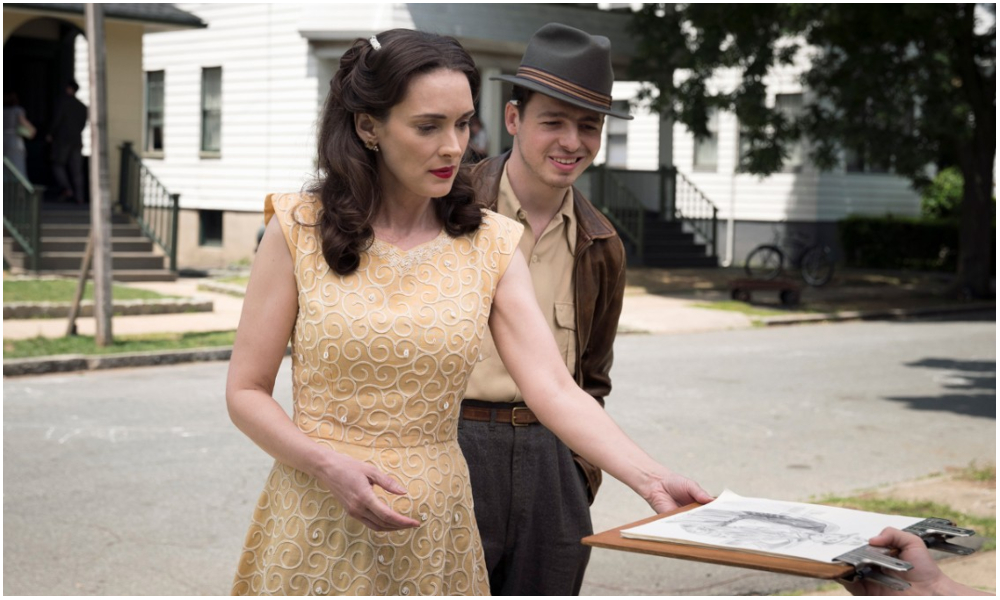 That is not to say that these characterizations don’t work well in the book. They do. But the book and the show are different mediums trying to accomplish different things. While inner monologuing is a common narrative technique in books, it does not translate well into film and television. Many of Roth’s novels share a similar type of narration, explaining why so few of them have been adapted to the screen.

Simon and Burns thus expand the point of view of the series, taking us outside Philip’s home and into Evelyn and Alvin’s lives. In doing so, they fill out Roth’s characters, shaping them into vibrant and complex figures driven by clear motivations and desires. They strive to tell a more complete story of the Levin family, one that showcases Alvin and Evelyn as people in their own right, more than what Phillip sees.

In Roth’s novel, there’s an inherent contradiction in Alvin. He wastes most of his time gambling away his money and horsing around with his delinquent friends, putting him in conflict with Philip’s father. At the same time, Alvin displays a certain level of integrity by going to Europe to fight the Nazis on behalf of the Canadians. While one can read his running off to fight Hitler as an act of sporadic rebellion against Herman more than a quest for justice, at the end of the day, he still put on the uniform.

Yet after Alvin loses his leg while fighting against the Nazis for the Canadians in World War II, the complexity that Roth established in Alvin disappears. Destroyed by the war, Alvin’s idealism is replaced by anger, cynicism and rage. Take his reaction to Uncle Monty’s job offer. After scolding Alvin for his resentful attitude, Monty suggests he work at his produce shop, leaving Alvin filled with “every evil thought.” Compare that to the scene in the television adaptation, which takes place in the fourth episode. Yes, Monty is not as harsh on him as he is in the novel, but Alvin shows real sadness, regret, helplessness and appreciation toward his uncle at that moment and, unlike in Roth’s version, accepts the job immediately.

This more complex Alvin does not just appear on screen out of nowhere. Throughout the series, we get numerous additions to Alvin’s story that display the spirit of integrity that Roth only hinted at. Sure, he is still hanging out with the same delinquent friends and gambling away his money, but he also takes the fall for one of those friends after they steal money—costing him his job at an auto repair shop—stands up for them when they are beaten by German-American citizens and looks out for his nephews. Furthermore, when called upon again to fight the Nazis, this time on his home turf against the Lindbergh administration, he signs on without hesitation. Nevermind the fact that he lost a leg the last time he put on a uniform or that this new mission presents a much greater personal risk. For Alvin, there are more important things than himself.

Evelyn, on the other hand, never displays the multiple layers that Alvin does in Roth’s novel. She immediately subscribes to Lindbergh’s agenda and even begins working for him under Rabbi Lionel Bengelsdorf, whom she eventually marries, to resettle Jewish Americans in the “heartland” of the country so they can get to know the “real America.” Doing so, she believes she is helping her community by exposing them to new perspectives and freeing them from their “shtetl” mentality.

However, Roth never really explains why Evelyn is so quick to jump on the Lindbergh train. So Simon and Burns fill in the blanks by making a few subtle changes and additions to her character.

Like her book counterpart, on-screen Evelyn begins the series unmarried, working as a substitute teacher. However, unlike the book, the series makes her Bess’ (Zoe Kazan) older sister, not her younger sister. The show also introduces Evelyn and Bess’ mother, who is already dead when the book begins. While Bess is away raising her family, living the idealized life of a Jewish woman in the 1940s, Evelyn cares for her elderly mother in a dusty two-bedroom apartment.

Lacking status and family and constantly taking care of her sick mother, Evelyn is desperate for something to call her own. She does not have her own job, subbing for those that can’t come to work, and begins the series sleeping with another woman’s husband. This, combined with the unspoken shame of her younger sister marrying before her, explains why she would be so blind to the true impact of Lindbergh’s policies. Working for and marrying Bengelsdorf gives her the status and family she desires. She is even able to “have a child,” so to speak, by roping Philip’s older brother into the Lindbergh web and driving a wedge between him and his parents.

Evelyn is power-hungry and naïve, but Roth never shows her in a political setting. The only instance we see Evelyn in her professional capacity is when Philip visits her office. But there she is talking to a 10-year-old child and holding all the cards. We never see her interact with her coworkers or superiors.

Simon and Burns provide us with that opportunity. Throughout the series, Evelyn interacts with major political figures such as Mrs. Lindbergh and Henry Ford, and she is clearly in over her head. Ryder plays Evelyn with a constant demeanor of unease and worry, as if everything she has is about to be ripped from her. Like the book, everything eventually comes crashing down. By showing Evelyn in her state of unease to viewers early on, her breakdown in front of her sister toward the end of the series, which also occurs in the novel, has more context.

None of these additions or changes absolve or redeem Alvin or Evelyn. Alvin is still the same impulsive boy who lost his leg while spitting on a dead Nazi and Evelyn is indirectly responsible for the death of Selma Wishnow, murdered in a pogrom after being relocated to Kentucky by Evelyn. However, they open the door to a more nuanced understanding of these characters, reminding us of their humanity and circumstances. More than that, the adaptation gives viewers a richer portrait of America, showcasing varying paths of resistance to fascism and xenophobia—collaboration for Evelyn, confrontation for Alvin—forcing us to ask ourselves: what would we do if it happened here?