I met my first husband in college. We dated for more than two years and married five days after I turned 23. Sixteen months later, he came home from a party I had not attended, sat me down and announced, “I don’t want to be married to you anymore.” More than three decades later, I still can’t make sense of what happened.

An excruciatingly prolonged relationship with Mr. Not-Even-Jewish consumed the balance of my 20s. He was black and his cultural identity was a hugely significant part of his life. That motivated me to look more deeply into my own cultural identity.

I began correcting a lifelong ignorance of my heritage by studying Judaism. At first, it was merely an intellectual/anthropological curiosity. It was years before I took Judaism seriously.

At 29, I remarried. I learned how to keep Shabbat, how to keep kosher and how to study Torah in a way that soothed my soul. Alas, despite producing two delicious children, my second marriage soured fairly quickly, though I hung on for seven years.

By then, I was living an Orthodox life in a major Jewish community in Baltimore, yet I was significantly different from most Orthodox women. Besides being a ba’alat teshuva (adult returnee to traditional Judaism), I had an advanced secular education, a significant professional identity, two young daughters and two ex-husbands.

The chances of me meeting a suitable Orthodox man were negligible. I fully expected to be alone for a long time.

Mann Tracht, Un Gott Lacht—Man plans and God laughs. I don’t know why or how I merited such a gift, but the very same year my second marriage ended, I finally met my beshert.

Within a period of a few weeks, two friends and a colleague mentioned the same local, never-married, congregational rabbi to me. Despite the fact that she hadn’t spoken to him in 20 years, one friend was so convinced we were beshert that she left him a monumentally long voicemail message, encouraging him to call me.

A few days went by and I hadn’t heard from him yet. So I called him. This isn’t generally done in the Orthodox world. I remember clearly thinking that if it put him off, we wouldn’t be a match anyway.

We went out for coffee after a Torah lecture in his shul.

Eight months later, we married in a huge synagogue wedding, with 1300 congregants and day school students in attendance. 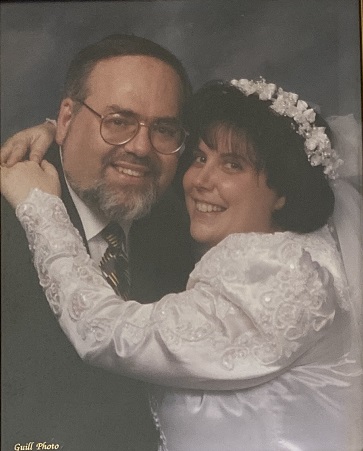 Rivkah and Rabbi Elan Adler at their wedding on December 11, 1996, at Beth Tfiolh Congregation in Baltimore

I may have had a painfully rocky start, but we have been blessed (so far!) with 24 peaceful, harmonious years. We function together as a team, and that has made all the difference.

That, and the fact that he makes me laugh every single day. 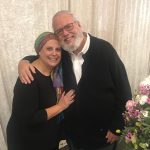 Rivkah Lambert Adler is a freelance journalist, book reviewer and adult educator, specializing in Jewish and Israel content. Her particular focus is on the current non-Jewish awakening to Torah. Her beshert, Rabbi Elan Adler, is a Torah teacher and pastoral counselor. They made aliyah in 2010 and live among the Judean hills, just south of Jerusalem. They have children and grandchildren in Israel and the U.S.

17 thoughts on “Beshert | My Three Husbands”