At the University of Maryland, Critics Boycott Israel Fest

Tempestuous wind wasn’t the only thing challenging the University of Maryland’s Israel Fest on April 19. The annual celebration of Israel’s independence—situated on the university’s large green, McKeldin Mall—was met with keffiyeh-clad students and a large Palestinian flag in front of an “Israeli Apartheid Wall.”

The “Boycott Israel Fest” movement, organized by Students for Justice in Palestine (SJP) and the Muslim Alliance for Social Change, set up shop the morning of the event by McKeldin Library at the end of the mall. SJP later held a teach-in at the same spot, with guest speakers, makeshift megaphones and chanting. “We are encouraging people to walk around the festival and not patronize the event, and instead come to our teach-in,” said Nicholas Galloway, a senior anthropology major and a member of SJP. “Theoretically, [Israel Fest] should be cancelled.”

While Israel Fest’s Facebook description maintained that the event was a celebration of “culture, history and the 70th birthday of Israel,” the protestors on the scene disagreed. “Especially in light of the recent events that have been happening on the Gaza border, it’s basically impossible to separate the political nature of the festival from anything cultural,” said senior sociology major and SJP treasurer Mandy Stussman. “I just think it’s in poor taste and inappropriate to have an Israel Fest right now.”

Protests are not a foreign concept to UMD’s Israel Fest, which has been going on for about 15 years. Last year’s installment featured increased police presence due to protests the prior year—in 2016, while no one was arrested, an officer pushed a student toward the grass, according to the Diamondback.

Israel Fest’s patrons, however, weren’t there for the protests. “It’s not something I like to interact with,” said junior studio art and theater major Rina Goldman, who tabled for Israeli dance group Avira. “I’m here to see Israel Fest; I’m not really here to think about the boycott or pay much attention to them.“ Israel Fest hosted an array of activities for students, including a rock wall, falafel and hummus tasting, a dunk tank and the famed camel ride, among others.

Noa Dar, the Jewish Student Union’s vice president of Israel affairs, arrived at 5:45 a.m. with the executive board to help get the event set up in time for its 10 a.m. start. “We’re just focusing on our event, really. We’re an apolitical event,” the senior government and politics major insisted. “We’re not really trying to start anything; we’re just trying to celebrate our country.”

The teach-in, however, hosted a number of speakers who disagreed. The event’s goal was to educate viewers on the Israeli-Palestinian conflict and expose the alleged erasure of Palestinian livelihood and culture. The event’s Facebook description read: “This year, we ask that you choose not to be complicit in apartheid, genocide, and the enduring illegal occupation of Palestine.” It covered Palestinian human rights and talks, chants and solidarity from a couple of student organizations, such as the Pride Alliance and the International Socialist Organization. The spectacle drew crowds from both sides, including a noticeable proportion of those coming straight from Israel Fest. 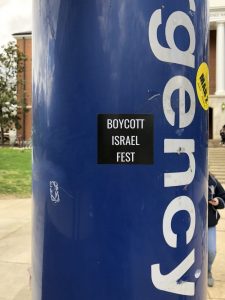 The organizers of the boycott and teach-in started promoting their event about a week before the event. Many a sticker with a solemn black background and a white “BOYCOTT ISRAEL FEST” emblazoned on lay among the walls and lampposts around campus.

Sarah Eshera—the founder and president of Muslim Alliance for Social Change—said stickers were a new phenomenon this year, though, due to backlash past. “We did stickers because we learned from last year when we put up flyers, people just tear them down, or when we did chalk, people would wash it away,” the senior math and philosophy major said, “so we put stickers, and people would try to scratch them off.” She mentioned that when SJP submitted a bill to the student government to encourage the university to divest from Israel, which was eventually shot down, the group received a fair bit of criticism, adjudged anti-Semitic by many and, at the event, told that they support terrorism. The bill was eventually abandoned, perhaps because of UMD’s notable Israel-supporting contingency.

Israel Fest received its funding from 30 campus organizations in addition to the Student Government Association—among them, the Catholic Student Center, the Baha’i Club and the Indian Student Association, which tabled at the event.

“We kind of just wanted to show our support for Israel Fest and for the Jewish Student Union, but of course it’s an apolitical event, so we just kind of wanted to come and help another student org out and do what we can to like promote Indian and Jewish culture together,” said Shivani Talwar, a senior public health major and co-president of the Indian Student Association, adding that the organization does not take sides in the broader conflict.

For now, it seems the annual event will continue to thrive and the boycotts will naturally follow. “They’re welcome to [protest],” Jewish Student Union president Josh Goldstein said. “We’re trying to focus on our event as much as we can and just ensure that we run the most successful event that we can.”

Regardless of whether the anti-BDS law gets attached and becomes law, the debate it triggered can serve as a useful map of pro-Israel politics on the Democratic side.

END_OF_DOCUMENT_TOKEN_TO_BE_REPLACED

Whatever the intensity of the anti-Israel voices rising from BDS and other anti-Israel advocacy organizations, they do not threaten our country’s national security.

END_OF_DOCUMENT_TOKEN_TO_BE_REPLACED

“Keep reminding yourself: This is not normal,” warned comedian John Oliver on Last Week Tonight. It was less than a week after Election Day, and the country was just beginning to process Donald Trump’s unexpected victory. Opponents of the president-elect were scrambling to discern what had changed in a world they thought they understood.

END_OF_DOCUMENT_TOKEN_TO_BE_REPLACED

Why Feminism and Zionism Are Not Contradictory

Sarsour, like the activists from the International Women’s Strike, is a committed supporters of the Boycott, Divestment and Sanctions (BDS) movement that singles out Israel and Zionism for condemnation. This reflects not only a misunderstanding of Zionism but a violation of some of the most basic feminist principles.

END_OF_DOCUMENT_TOKEN_TO_BE_REPLACED

Tikkun olam promises much and demands comparatively little in the way of sacrifice. This is its greatest strength and, perhaps, its major weakness.

END_OF_DOCUMENT_TOKEN_TO_BE_REPLACED

While still addressing the integration of Israeli-Americans into American Jewish life, this year’s conference gave center stage to the Coalition for Action’s step-by-step construction of alliances with local political and religious groups and use of social media to build support for pro-Israel actions.

END_OF_DOCUMENT_TOKEN_TO_BE_REPLACED

Building a Boycott, Letter By Letter

END_OF_DOCUMENT_TOKEN_TO_BE_REPLACED

There is no reason for the Jewish community to be monolithic in our opinions.

END_OF_DOCUMENT_TOKEN_TO_BE_REPLACED

A political “big tent” would be better for Washington, DC’s Theater J and everyone else. // By Marshall Breger

END_OF_DOCUMENT_TOKEN_TO_BE_REPLACED

Facebook Twitter Pinterest linkedin Telegram
By Aarian Marshall Something’s afoot in the Park Slope Food Co-op. If you are not a local of bourgeois Brooklyn, if the New York Time...