Confined to her home studio in Ramat Gan outside Tel Aviv during the COVID-19 lockdown, Kiev-born Israeli artist Zoya Cherkassky started producing a painting a day. One of her first works, “Black Chuppah,” was inspired by a YouTube video she came across of a contemporary “Black Wedding” held in a Jewish cemetery near her home during the early days of the coronavirus outbreak.

The painting pictures a man and a woman, their hands entwined, standing beneath a swath of black fabric against a background of gravestones bearing Hebrew inscriptions. Cherkassky learned that such ceremonies had evolved across Eastern Europe during the 19th century as a ritual for coping with the cholera epidemics that routinely ravaged the area. Held amid the graves of the dead, these ceremonies, which often involved the forced union of orphans or beggars, were believed to halt the contagion. 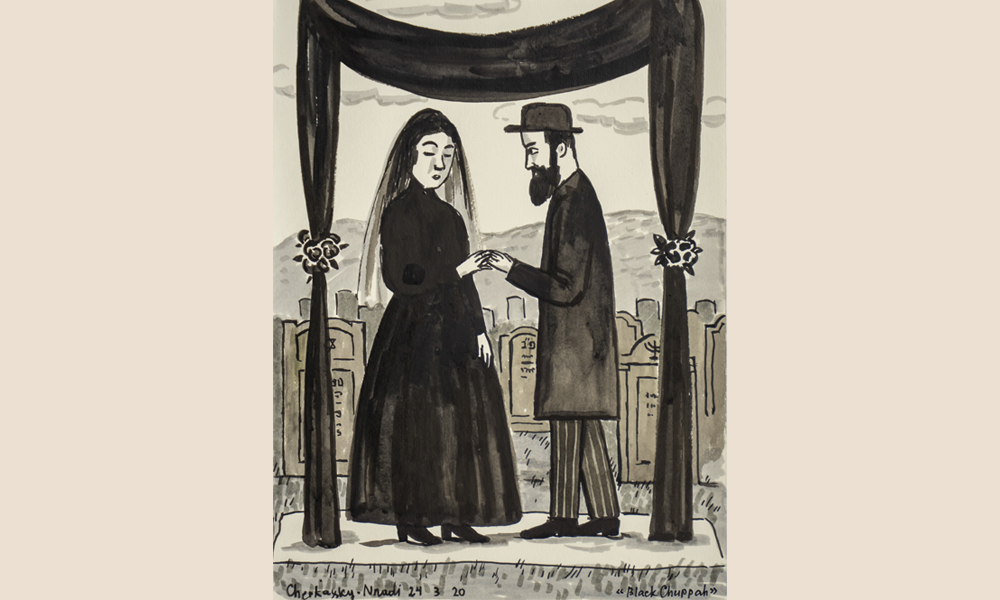 This past April, the Fort Gansevoort gallery in New York opened an online virtual exhibition of 19 of Cherkassky’s new paintings. Titled “Lost Time,” the show was organized by Brooklyn-based writer and curator Allison M. Gingeras and enriched by explanatory material based on several weeks of daily personal exchanges between the artist and Gingeras via texts and Zoom as they sheltered in place in their respective homes.

The title of the exhibition refers to the now-vanished world of Eastern European Jewish life before the Holocaust. Images of traditional Jewish scenes such as a Sabbath family dinner or Passover seder, a family stroll through a shtetl, conflate past and present and conjure a sense of timelessness. Cherkassky’s distinctive figurative style, in some ways reminiscent of folk or outsider art, aptly captures this bygone era. The inspiration for the title came from Gingeras’s reading of Polish artist Jozef Czapaki’s book, Lost Time, about his imprisonment in a Soviet Gulag and his nightly recitations of a Proustian past to distract his fellow prisoners from a torturous present. Gingeras says she saw an analogy in Czapaki’s tale to Cherkassky’s visual renderings of a Jewish past during the present period of global pandemic. 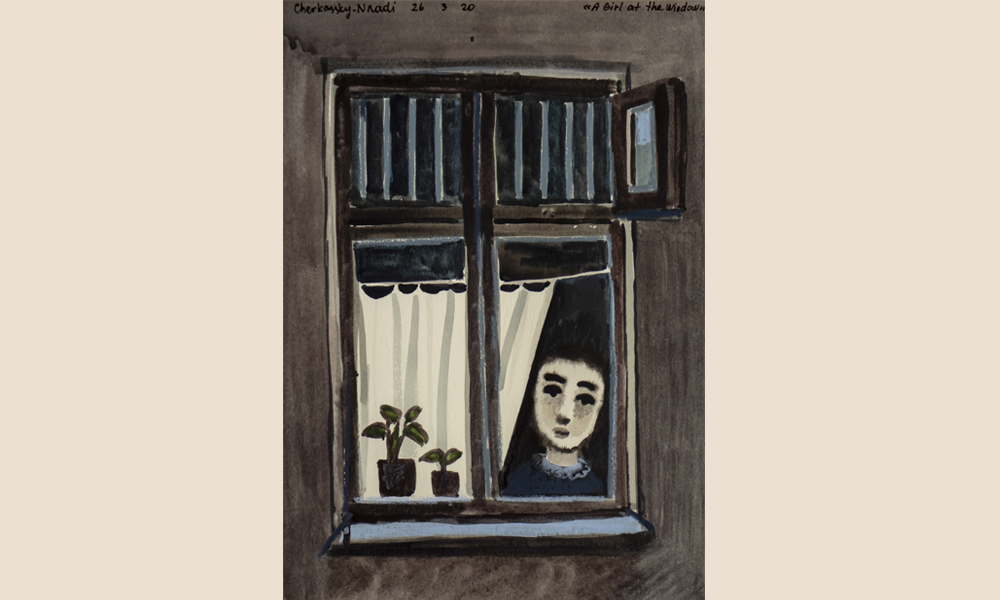 These imaginary scenes draw on cultural and collective memory, echoing both ordinary and traumatic events. Several, for instance, are inspired by the anti-Semitic pogroms in Russia, others by the story of Anne Frank. Such traumas have parallels with our current experience of anxiety, fear and suffering in the face of a life-altering pandemic and a shift in the perception of time.

“These drawings,” Cherkassky says, “are similar to the feeling we have right now, that the world will never be the same.” “All the associations in these works go beyond the question of Jewish identity,” says curator Gingeras. “Of course they have a very specific reference point to lost eras and historical traumas. But there is a common humanity that underlies all these images and that takes on a collective resonance for all of us.”Cherkassky’s paintings also capture the comfort of the everyday, the familiar—rituals, stories, traditions, tastes—and imbues them with symbolic meaning.

A young girl gazes longingly through a curtained window, young boys study the Hebrew alphabet, and there are contemporary references in her paintings as well. “An Open Air Minyan,” for instance, depicts men gathered for prayer, but with the requisite social distancing. “Cherkassky’s Jewish family offers us an allegorical portrait of this moment,” says curator Gingeras, “an imposed ritual of sitting at home, with our thoughts toggling back and forth between memories of things past and anxious projections of an undefined future.”

Fort Gansevoort New York is a contemporary art gallery that represents emerging and established artists from around the world. “Lost Time” will be available online through December 2020 here.