I was a child, tender and my mother’s only…And together we used to have great fun every day…She was taken from me when I was almost fourteen…A woman of valor, of many talents…the work of her hands was magnificent, words cannot describe…works of art, embroidery in silver and in gold more valuable than pearls, for the grandeur of the sanctuary and the court.” —Rabbi Jehiel Hayim Viterbo, son of Simhah Viterbo, Sefer Va-yehi’od, 1818

In the middle of the 18th century in the city of Ancona on the Adriatic coast of central Italy, a young Jewish girl, about age 15, produced a stunning work of embroidery. The intricate textile was a Torah ark curtain, or parokhet, likely destined for the local Italian synagogue. At the lower edge of the textile, the girl, who was the daughter of a rabbi, embroidered an inscription in Hebrew that included her name and the date—Simhah Viterbo, in the year ha-yasher ve-ha-tov, the year of “the straight and the good”(Hebrew 5515, or 1754-1755). Interestingly, this elegant, silk satin curtain, which was embellished in silver and gold, was crafted in Ancona’s Jewish ghetto, Simhah’s home.

Now this rare textile is the centerpiece of a new exhibition—“Signed in Silk: Introducing a Sacred Jewish Textile”—on view at the Saint Louis Art Museum from March 19 through October 3. Curated by Genevieve Cortinovis, the museum’s assistant curator of decorative arts and design, the show brings together a selection of devotional textiles used in Jewish, Christian and Muslim settings, along with fashionable secular textiles from across Europe. Viterbo’s ark curtain had been on long-term loan to the Israel Museum until 2018, when it was put up for auction at Sotheby’s by its owner. When Cortinovis saw the textile for the first time, she recognized a remarkable treasure. “Despite some wear and losses,” she says, “it was extraordinarily beautiful.” The Saint Louis Art Museum landed the high bid. 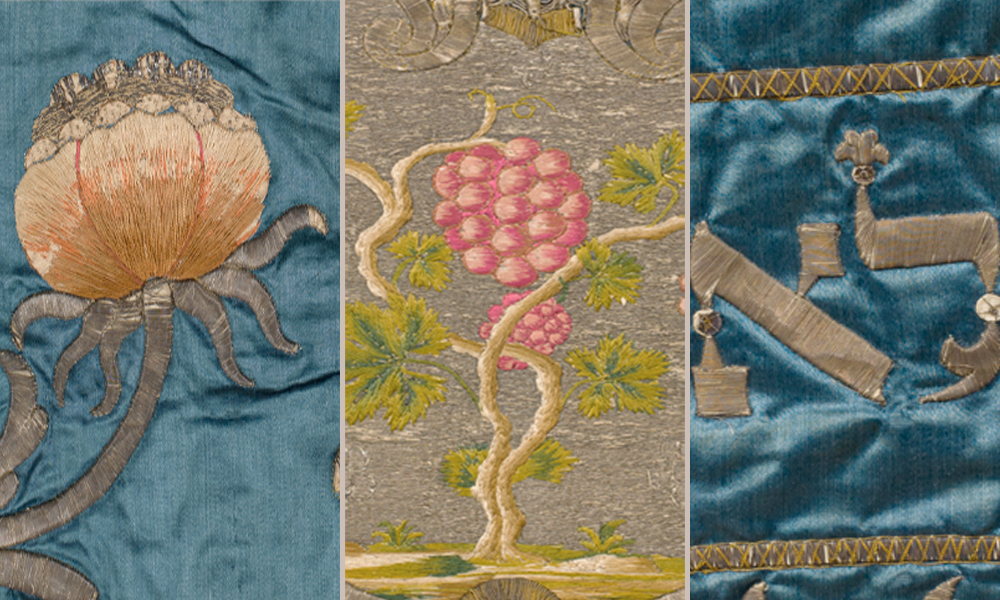 Floral in design, the curtain has naturalistic and stylized details. Viterbo signed her name and date in Hebrew at bottom of the curtain. (Photo credit: Courtesy of Saint Louis Art Museum)

In creating this elaborately embroidered ark curtain, Viterbo was continuing a long tradition of Italian Jewish women who created sumptuous sacred textiles for their synagogues. In Italy in the Middle Ages and early Renaissance, embroidery was practiced by men. But in the late 16th century, it became an important part of a girl’s education and was widely practiced by women of nearly all social classes and religions. Thus most of the Italian synagogue textiles that survive were likely made by women. Signed 18th-century Jewish textiles, however, are rare, and it’s not clear why Viterbo chose to append her name to the work. Torah ark curtains serve as a partition between the ark and the prayer hall and became fixtures in Ashkenazi and Italian synagogues in the Middle Ages.

During the 18th century, the bustling port of Ancona was home to a large multiethnic Jewish community, many members of which had sought sanctuary there from persecution elsewhere in Europe. The community included a prosperous group of Jewish traders and boasted two synagogues, one Levantine, the other Italian. It was also a Papal State, which since 1555 had oppressed the Jewish population, most of whom were forced into low-skilled trades and restricted to ghettos. There were Ashkenazi Jews, Sephardi Jews and Italianate Jews all living together within this one space, having come to Ancona at very different times in history. Remarkably, this segregation of culturally diverse Jewish communities corresponded to a blossoming of Jewish ceremonial art.

Ancona benefited from trading ties established by Jewish communities across the Ottoman Empire. The city, which had become a free port in 1732, was a major trading partner, for instance, with Istanbul and Thessaloniki, two Ottoman-controlled cities with large Jewish populations. The eclectic nature of Viterbo’s ark curtain suggests she was aware of these global networks. Other textiles on view in the exhibition illuminate her striking synthesis of designs, from stylish 18th-century Indian cotton textiles to the late Baroque and early Rococo ornamentation found in the fashionable textiles and silver of the time. This teenage girl, confined to a ghetto, skillfully merged a variety of decorative motifs and techniques, gracefully incorporating influences from such sources as Baroque garden design, Christian ecclesiastical embroidery and Ottoman prayer rugs.

“This teenage girl, confined to a ghetto, skillfully merged a variety of decorative motifs, sources and techniques.”

A tour-de-force of needlework, Viterbo’s azure curtain is appliqued and embroidered with silk and metallic threads, velvet, hammered foil and sequins. The silver and gold embellishments and most of the flowers are worked on thin sheets of vellum, prepared animal skin. Some of the silver flowers tend to be more stylized, but the colorful satin flowers—carnations, roses and bellflowers—are more lifelike, reflecting a European taste for botanical naturalism. The curtain’s design is essentially floral, which was the dominant decoration of 18th-century Italian Jewish textiles; however, the design is unusual in its symmetry, its central “fountain-like” motif and its narrow, enclosed floral borders, which suggest the influence of Ottoman textiles.

Few mid-18th-century Torah ark curtains from northern Italy have this type of enclosed border. Curious, Cortinovis looked at Ottoman textiles of the same period and also at slightly earlier curtains for comparison. In Venice in particular, she says, there are a number of very famous ones from the 17th century that have enclosed floral borders, as well as many examples made in the 18th century in the Ottoman Empire that more closely relate to carpets.

Viterbo’s curtain also stands out because it’s not an adaptation of an existing textile. “Our conservator,” says Cortinovis, “looked really carefully at the piece, examining the various stages of embroidery, and it seems to be an entirely original work.”

The exhibition “looks at how Viterbo created an object that reflected her Jewish heritage as well as her own place and time at the center of a major trading crossroads during an era of increasing cultural connectivity,” Cortinovis says. “I hope the show will give viewers a more nuanced understanding of how culturally diverse Italy is, and always has been, and that it will challenge our assumptions about what Italian art means, and who makes it.”

One of the great surprises of the research undertaken for the exhibition was the revelation of the poetic tribute to Viterbo written by her son. It was found on a page penned in Sephardic script that appeared on a Viterbo genealogical website, but with no citation or translation. Building on research done by a descendant of the family, Cortinovis was ultimately able to track down the 1818 volume from which the page came and had it translated by experts at Washington University in Saint Louis.

As her son attested, Viterbo used her talent to create “works of art…more valuable than pearls” to honor her people. One of the goals of the exhibition, says Cortinovis, is to give viewers an understanding of Viterbo as an extraordinarily talented artist and to evoke an appreciation not only for her work, but for who she was and what she was up against.