Ribbed moiré silk from Greece, tulle and silver-tinsel embroidery from Egypt, silk satin from Ottoman Palestine, indigo-dyed goat hair from Iraqi Kurdistan, brocaded silk ikat from Uzbekistan. This intriguing and opulent array of historic garments and textiles is currently on display at the Contemporary Jewish Museum in San Francisco. The exhibition, Veiled Meanings: Fashioning Jewish Dress, from the Collection of The Israel Museum, Jerusalem, features some 100 items spanning the 18th to 20th centuries from four continents and more than 20 countries. On view through January 6, 2019, it is the first comprehensive U.S. exhibition drawn from The Israel Museum’s world-famous collection of Jewish costumes.

The garments displayed demonstrate the diversity of Jewish communities across centuries and continents and reflect the wide-ranging migrations of Jewish populations in Europe, Asia, North Africa and the Americas. The array is a testament to communities and forms of dress and craft that no longer exist. With its focus on function, color and artistry, the exhibit brings issues of migration and acculturation to life through the lens of fashion. 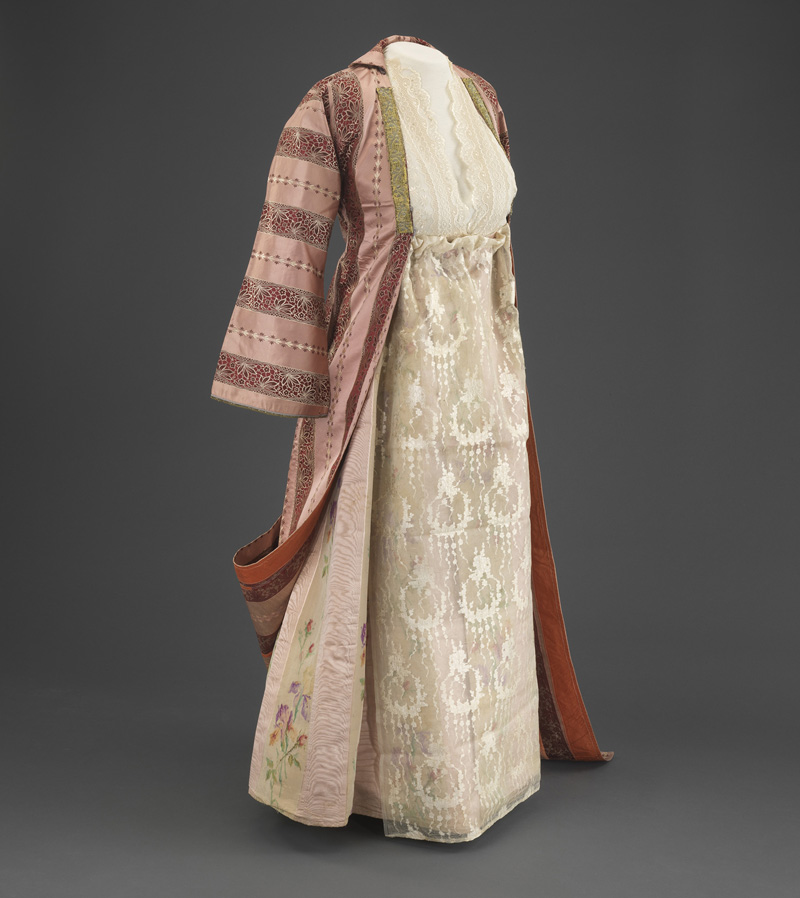 The show relates the story of how Jewish dress transmitted styles, motifs and dressmaking techniques from one community to another and how those traditions were in turn shaped by local customs and political and social changes in the areas where Jews settled. From Spain to Morocco, the Ottoman Empire to Algeria, and Baghdad to Calcutta, clothing styles developed from the interweaving of imported and local fashions, materials and craftsmanship, resulting in unique, often eclectic creations.

A woman’s ensemble from early 20th-century Algeria, for example, reflects the many changes that had an impact on the Jewish community there. The gilt embroidery on the front is borrowed from medieval Spanish costumes, likely brought to North Africa by Muslims and Jews fleeing the Christian Reconquista in the late Middle Ages. The floral pattern of the embroidery is typically Ottoman (the Empire ruled over Algeria for three centuries), and the sleeveless cut is similar to that of the entari dress worn by Jewish women during the same time period in Salonika in northern Greece.

From cultural dress codes to individual forms of self-expression, the exhibit looks at how clothing balances the personal and social and how it distinguishes different communities. Clothes worn by Jews were often similar or even identical to those worn by their non-Jewish neighbors, but special features sometimes set them apart. Veils and wraps were worn by Jewish women in Afghanistan, Iraq and Uzbekistan, reflecting the influence of local Islamic culture. The Herati chador, however, a wrap that originated in Muslim Iran and was brought to Afghanistan by Mashhadi crypto-Jews who fled to Herat because of persecution at the beginning of the 19th century, was unique to Jews. In Herat it differentiated Jewish women from the Muslim women who wore the burka. 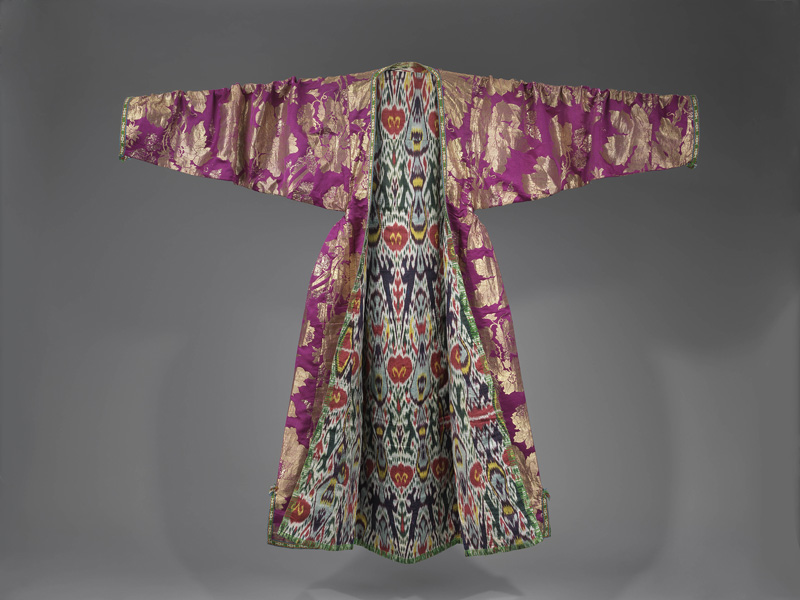 The vibrant colors and rich materials (Russian brocaded silk and an ikat-dyed silk and cotton lining) of this luxurious, late 19th-century collarless woman’s coat, or kaltachak, from Bukhara, Uzbekistan, indicate that it once belonged to a wealthy woman.

The clothes we wear become a part of us. They embody our histories, our environments, our dreams, memories and aspirations. But to what degree, the exhibition asks, is one’s choice of clothing discretionary? And to what extent is it determined or restricted by those very concerns?

Clothing conceals and reveals, literally and figuratively. It covers our bodies, but it can also uncover hidden histories and personal narratives. The extent to which women’s bodies are revealed or concealed by their clothing continues to be an issue today. Encoded messages, clandestine meanings and traditional motifs are often embedded in clothing. These symbols convey information about gender, age, geography, background, status and custom. Before the advent of modern medicine, amulets and symbols were often used as protection. Cowry shells, red stitching and asymmetry, for instance, were believed to have mystical powers. Spiral-patterned embroidery symbolized the cycle of life. In North African communities, wearing black was associated with the destruction of the Temple in Jerusalem.

Amulets related to Jewish tradition date back to ancient times and appear in the Babylonian Talmud and in the Kabbalistic tradition. The earliest amulets were often made of semi-precious or precious stones. One of the most common amuletic symbols is the hamsa. A North African emblem used in both Judaism and Islam to ward off evil, it’s frequently depicted as a hand or an open palm, sometimes with an eye at its center. 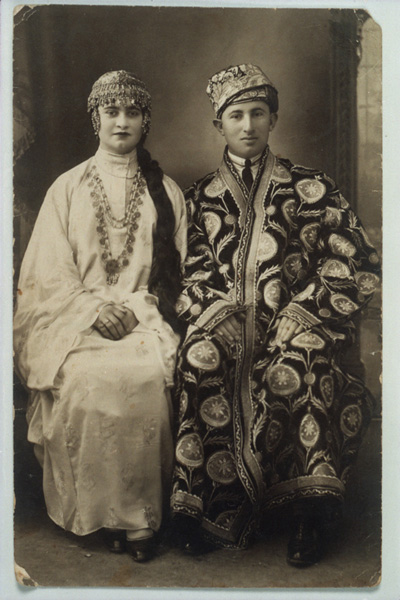 David and Rina Davidoff donned traditional Bukharan attire for their betrothal in Jerusalem in 1927.

Fine craftsmanship and colorful designs reference the historic role the Jewish people played in textile production. In places such as Bukhara, Uzbekistan, indigo and ikat dye techniques were often considered too lowly or dirty (they were prone to leave lasting stains on the hands of the dyer) for Muslims to engage in, thus enabling Jewish craftspeople to monopolize those key trades.

Garments frequently were altered and repurposed over time. An elaborate bridal gown would have accompanied an aristocratic Ottoman Jewish woman throughout her life and often was worn at festive occasions after the wedding. Following her death, it likely would have been refashioned as a Torah ark curtain. In Afghanistan, it was customary for Jewish women to donate their scarves to be tied to the finials of the synagogue’s Torah scroll for decoration and to perpetuate their memory.

Each item in this engaging exhibition tells a story—the story of its creator or wearer, of the community to which it belonged, its position in time and space, and its journey through generations, families, networks of travel and rites of passage. It’s a story worth experiencing.—Diane M. Bolz

END_OF_DOCUMENT_TOKEN_TO_BE_REPLACED

It’s one of the more unsavory parts of the Bible. Lot, after the destruction of Sodom, is seduced by his two daughters, who think they are the world’s sole survivors.

END_OF_DOCUMENT_TOKEN_TO_BE_REPLACED

Facebook Twitter Pinterest linkedin Telegram
Even before the Jews in the Warsaw Ghetto (1940-1943) knew of the “Final Solution,” they understood that their story needed to be pre...

END_OF_DOCUMENT_TOKEN_TO_BE_REPLACED

When Charlotte (called Lotte by her family) was eight years old, her mother died. At the time she was told the cause was influenza—the truth was kept a carefully guarded secret.

END_OF_DOCUMENT_TOKEN_TO_BE_REPLACED

The Ottomans ruled what is now Israel for 400 years, and during that time they made some iconic contributions to the man-made landscape. Sultan Suleiman I (a.k.a. Suleiman the Magnificent) completed the current walls of Jerusalem’s Old City in 1541. The Jaffa Clocktower, finished in 1903, was built to celebrate the silver jubilee of Sultan Abdul Hamid II. Over time, innumerable Ottoman buildings have been lost, replaced by those of British or Israeli design, just as they in turn had replaced those of the Crusaders, Mamluks, Byzantines, Romans, Hasmoneans, Greeks, ancient Israelites, Babylonians, Assyrians and Philistines.

END_OF_DOCUMENT_TOKEN_TO_BE_REPLACED

A Rare Peek Into a Renowned Library’s Vault

The extraordinary works in this exhibition are rarely seen, and this is their first time in America.

END_OF_DOCUMENT_TOKEN_TO_BE_REPLACED

“To this day I remember, feel, and love this town…I love this town because I grew up in it, was happy, melancholy, and dreamy in it. Passionately and singularly dreamy.”

END_OF_DOCUMENT_TOKEN_TO_BE_REPLACED

Maya Benton was a high school senior living in Los Angeles when the Russian-American photographer Roman Vishniac’s first posthumous book, To Give Them Light, came out in 1993. Renowned for his iconic images of Eastern European Jews taken between the two World Wars, Vishniac had died three years earlier at age 92.

END_OF_DOCUMENT_TOKEN_TO_BE_REPLACED

In 1967 a 29-year-old Israeli-born Canadian architect by the name of Moshe Safdie gained international recognition for his groundbreaking, visionary design for high-quality, affordable urban housing.

END_OF_DOCUMENT_TOKEN_TO_BE_REPLACED

Did you ever wonder about the origin of the distinctive round thermostat that regulates the temperature in your home? Or how about the pink Princess phone every teenage girl once coveted or those eye-catching images that promoted such films as The Man with the Golden Arm, Anatomy of a Murder or Exodus? All these items, it turns out, are evidence of the vital role that Jewish architects, designers and patrons played in the development and dissemination of modernism in America.

END_OF_DOCUMENT_TOKEN_TO_BE_REPLACED

“Marc loved the small-town feeling of Georgetown,” Evelyn wrote. “He liked being able to greet our neighbors and walking to Woolworths to buy postcards and an art-supply store to buy more brushes.” One day he told her that he wanted to “do something for the house,” but later, he said, “No, the house is perfect; I’ll make a mosaic for the garden.”

END_OF_DOCUMENT_TOKEN_TO_BE_REPLACED

In July 1937 Germany’s National Socialist Party opened an exhibition in Munich it termed “Entartete Kunst,” or “Degenerate Art.” Intentionally housed in cramped, poorly lit conditions and awkwardly hung, the works on view were accompanied by inflammatory, denigrating labels. The exhibition was an open declaration of the Nazis’ state-run war on modern art and the effort to impose their officially sanctioned conception of art through propaganda and force.