Nearly 200 people attended the We, Too, Are YU March for LGBTQ Representation this past Sunday in New York City. Marchers wore “We, Too, Are YU” t-shirts and pride flag pins and carried signs and pride flags with the Star of David as they marched from nearby Bennett Park to the Yeshiva University campus.

Yeshiva University, an institution affiliated with Modern Orthodox Judaism, has struggled to reconcile biblical prohibitions of homosexuality with its increasingly diverse student body. Within Orthodox Judaism, some rabbinic opinions condemn homosexuality while others attempt to offer acceptance and tolerance to religious LGBTQ individuals. Past events at Yeshiva University have reflected both approaches, underscoring the institution’s struggle to resolve the issue of LGBTQ representation on campus.

Although organized by the College Democrats, an official Yeshiva University club, the event was not approved by the university’s Office of Student Life. Two local Jewish LGBTQ organizations, Eshel and Jewish Queer Youth, helped sponsor and organize the event. The College Democrats are demanding permission for a Pride Alliance club and LGBTQ events, a statement from Yeshiva University President Rabbi Dr. Ari Berman condemning homophobic rhetoric, the appointment of an administrator whose role it is to promote diversity on campus, and sessions about tolerance and acceptance of LGBTQ students at orientations.

In a recent statement, Berman wrote that “Yeshiva University strives to be a nurturing and inclusive environment for all our students, ensuring that every individual is treated with respect and dignity.” Berman has put together a committee of rabbis and educators “to address matters of inclusion on our undergraduate college campuses, which includes LGBTQ+.” The committee, he says, will “work on formulating a series of educational platforms and initiatives that will generate awareness and sensitivity and help our students develop a thoughtful, halakhic, value-driven approach to their interactions with the wide spectrum of people who are members of our community.” The statement links to Yeshiva University’s non-discrimination and anti-harassment policy, and says that “the University is committed to ensuring that no member of our administration, faculty, or student body harasses or discriminates against any student or employee.”

Mordechai Levovitz, founder and clinical director of Jewish Queer Youth, noted this statement in his speech at the march. He and other members of the LGBTQ community have criticized Berman for not including any LGBTQ individuals on his committee. During the rally, Levovitz led chants of “nothing about us without us” to protest Berman’s decision.

In the hours before the march, Yeshiva University students, alumni, and staff, as well as representatives from Eshel and Jewish Queer Youth, spoke to a crowd of supporters. Molly Meisels, president of the College Democrats and lead organizer of the march, came out as LGBTQ during the opening speech. “I’m not doing this as an ally, I’m doing this as a bisexual member of the community I am advocating for. I march because I didn’t feel comfortable coming out at YU until right now,” she said, prompting applause from the crowd.

A major frustration within the LGBTQ community is the offensive rhetoric often used by students and professors in classes, particularly those relating to Jewish law. “In my first few weeks at school, I was in a class where the rabbi said that sexual relationships such as incest, bestiality and homosexuality are all sins punishable by death in the Torah,” said Courtney Marks, a march organizer and a student at Yeshiva University’s Stern College, in a speech before the march. “He spoke as if people like me are evil and as if our lives do not matter. This is why I march!” she added, holding back tears. 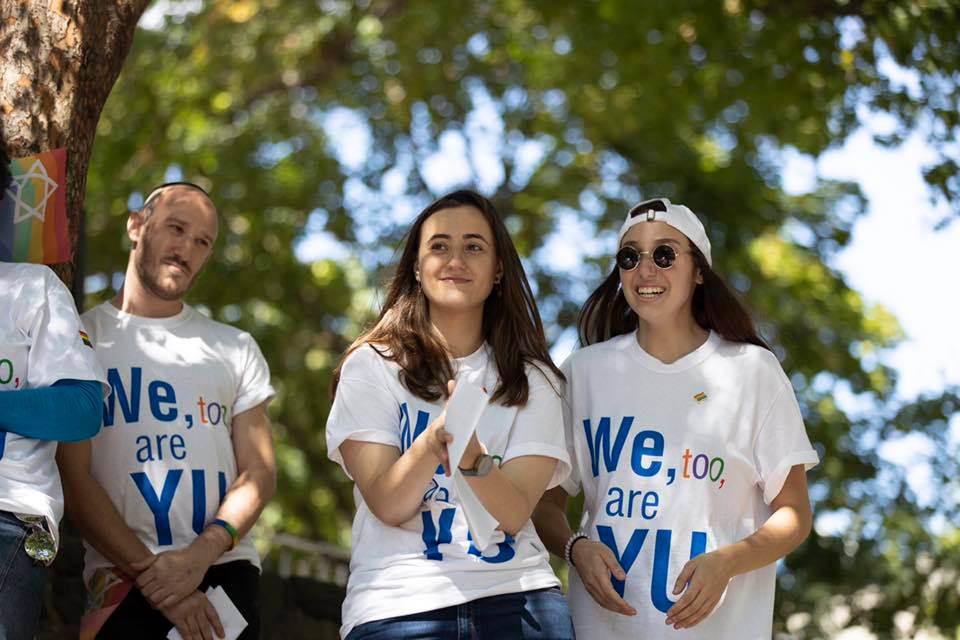 “I get paid to go to YU,” Joy Ladin, an openly transgender professor at Stern College, told the crowd in her speech. “But queer students are paying to be trashed in classes, to have humanity denied, to have halacha warped around values of homophobia and xenophobia and transphobia, rather than values that recognize that every kind of human being is created in the image of God.”

Ezra Felder, now studying at Columbia University, transferred out of Yeshiva University because of the intolerance he felt as an LGBTQ individual. “It became too much for me to stay in YU as a queer Jew,” he told Moment. “It was really difficult to be in a place where my queerness wasn’t able to be explored.”

Many marchers attended to support increasing LGBTQ representation in the Modern Orthodox community more broadly, not just at Yeshiva University. “It is important that our Jewish institutions, among them YU, which is a pinnacle and true peak of a Jewish organization in America, really represent us and recognize that we exist and make space for us,” said Gav Meiri, a march participant whose siblings attended Yeshiva University. “While this is specifically here about YU, it’s not only about YU,” explained David Kalb, a rabbi who works in the area. “It’s about synagogues. It’s about day schools. I think it’s about any kind of institution in the Orthodox community that should be doing whatever it can to be more inclusive to this world.”

Though no organized counterprotests attempted to disrupt the rally or march, Yonatan Teleky, who is currently studying at Yeshiva University, objected to the march and its demands. He distributed handouts which cited a statement by Rabbi Ahron Soloveichik’s, a former Yeshiva University rabbinical school faculty member, condemning a gay club at Yeshiva University’s Cardozo Law School in the mid 1990s. Teleky had underlined the lines: “It would be preferable to close down YU than to tolerate and recognize a homosexual club.” Teleky told Moment that it “is antithetical to Judaism to publicly celebrate sin and want to have clubs celebrating a sin.”

Marks, one of the march organizers, was impressed with the outcome of the event, as well as the diversity of its attendees. “We had a bigger crowd than we could have ever hoped for. We had rabbis coming with kippas and tzitzit and full-on beards. We had girls and long skirts. It’s amazing to see the Orthodox community represented in the LGBT+ community and its allies,” she said. “I’m almost at a loss for words.” While Marks does not think policy change will be immediate, she is hopeful that the march will have a positive impact on the strides the university’s LGBTQ community wishes to make. She and other members of the community plan to reach out to Berman after the High Holidays to discuss possible changes. They also hope to plan YU Pride Alliance events at Jewish Queer Youth until the club gets approval from the Office of Student Life to run events on campus.

Since the march, a group of Yeshiva University alumni have started #PledgeNotToPledge campaign, encouraging alumni to “pledge not to contribute any financial donations to the university until it takes the following concrete steps to ensure that all students feel comfortable on campus (as requested by the student body),” according to their Facebook page.

Levovitz, of Jewish Queer Youth, believes that the march was successful and is hopeful for the future of Yeshiva University’s LGBTQ community. “The question is, is this the hill that Rabbi Berman wants to let Yeshiva University die on?” he said. “Does he so much not want gay people to have any sense of dignity that he’s willing to risk government funding? Is he willing to risk his own students and graduate students not getting jobs because the degree is associated with homophobia? We’ve already won. The question is how much is he willing to sacrifice? And for what?”

END_OF_DOCUMENT_TOKEN_TO_BE_REPLACED

Meisels described a “complete lack of LGBT representation” at YU. “If there is any discussion of LGBT individuals on campus it is always negative and always involves homophobic rhetoric,” she said. “It’s a social thing,” explained Dov Alberstone, an openly gay senior at Yeshiva College “It’s the things that people say in the dorms to each other or in the gym. In normal social interactions people have, you get a sense that being gay is the worst thing you can be.”

END_OF_DOCUMENT_TOKEN_TO_BE_REPLACED

“As a non-binary, queer Jew, we’re living our life kind of on the periphery, and navigating our identities on a daily basis.”

END_OF_DOCUMENT_TOKEN_TO_BE_REPLACED

A group of Jewish Zionist supporters gathered in Washington, DC on Friday to protest the DC Dyke March’s ban on Israeli flags and Pride flags with the Star of David in the middle.

END_OF_DOCUMENT_TOKEN_TO_BE_REPLACED

Abby Stein: A Gender Transition Through a Jewish Lens

Abby Stein is the first openly transgender ex-Hasid and a lightning rod for Hasidic trans-youth.

END_OF_DOCUMENT_TOKEN_TO_BE_REPLACED

Last April, the San Francisco Board of Supervisors voted to name the main terminal at San Francisco International Airport after Harvey Milk, the gay rights martyr who was assassinated 40 years ago. The decision further (and literally) cements Milk’s legacy as the best-known LGBT activist in American history.

END_OF_DOCUMENT_TOKEN_TO_BE_REPLACED

A Historic Synagogue Welcomes the Future at National Pride Shabbat

END_OF_DOCUMENT_TOKEN_TO_BE_REPLACED

Opinion | Can You Be a Zionist-Feminist?

For feminism and Zionism to coexist without contradiction, we must truly embrace a feminist movement that includes the lived experiences of all women, and we must expand our understanding of Zionism to include supporting the rights of both Israelis and Palestinians. Most important, we must engage in meaningful work with those with whom we may strongly disagree about Israel.

END_OF_DOCUMENT_TOKEN_TO_BE_REPLACED

Book Review | Franz Kafka: The Poet of Shame and Guilt

END_OF_DOCUMENT_TOKEN_TO_BE_REPLACED

One thought on “‘We, Too, Are YU’: Students March for LGBTQ Rights at Yeshiva University”