In temperatures nearing 100 degrees, the Baltimore Jews Protest Against ICE rally marched through the annual Artscape festival in midtown Baltimore on Sunday to protest current immigration policy on the national and local levels. The rally, which was sponsored by Baltimore Jews Against ICE and the Baltimore chapter of Jews United for Justice, came soon after the recent announcement of upcoming ICE raids in Baltimore, among nine other cities.

“While we certainly want to be calling for the camps to close, for ICE to be abolished, and to stop deportations, stop separating families, we also know that our neighbors are being rounded up in raids right here in Baltimore,” said Molly Amster, president of the Baltimore chapter of Jews United for Justice, in an interview after the rally. “Our intention was not to disrupt Artscape, which is a really positive part of culture in Baltimore, but we wanted to use the opportunity to make people aware that these event sponsors are responsible for what’s happening at the border and what’s happening in our neighborhood.”

The rally was held during Artscape because the festival is partially funded by Johns Hopkins University and PNC Bank. The event aimed to protest and raise awareness of those groups’ involvement in the actions of ICE at the southern border, in addition to aggressive federal immigration policies. According to Amster, Johns Hopkins University currently has three contracts with ICE totaling more than $1.7 million for the medical, leadership and management training of ICE officials. PNC Bank, Amster said, finances companies, such as CoreCivic, that run the for-profit prisons currently housing immigrant detainees, with an estimated $100 million in revolving credit.

The rally marched through the Artscape festival before stopping in front of the Johns Hopkins University Station North Stage, where the band Survival Society was setting up to play. The band extemporaneously provided music to the rally’s chants and songs after expressing solidarity with the cause. 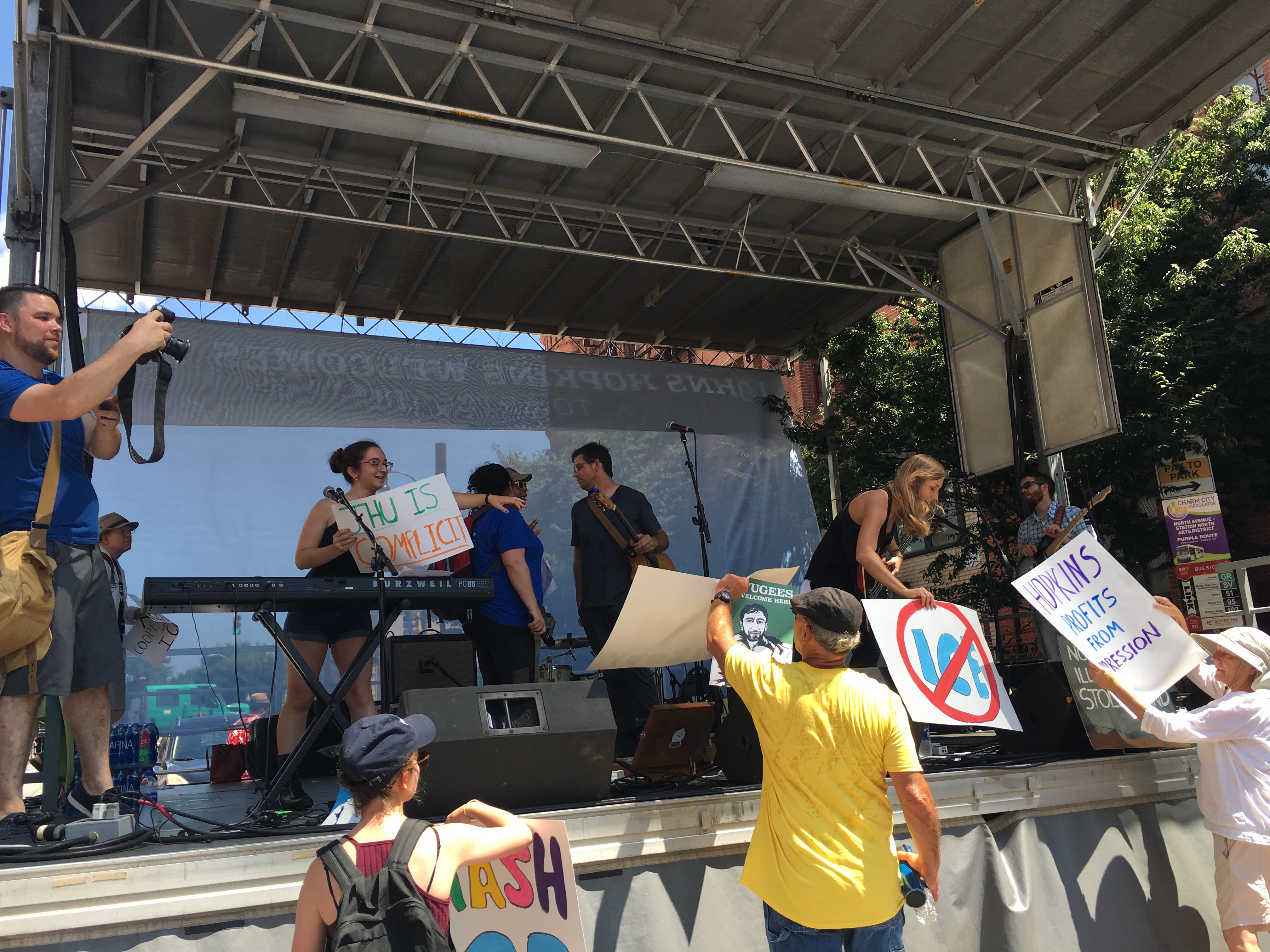 Chants during the rally included “JHU, shame on you! Melt the contracts, tell ICE you’re through!” and “PNC, divest from hate! It’s life or death—this cannot wait!” Many of the chants were called out in both English and Spanish.

After arriving in front of the stage, participant Rose Kent read the names of the 14 individuals who had died in ICE or CBP custody in the last year, which was followed by a recitation of the Mourner’s Kaddish.

The rally emphasized the Jewish community’s history of persecution and oppression, and how that background connects to the current immigration policies and conditions. “I think a lot of Jews in Baltimore have felt very moved to act,” said Evan Serpick, member of Baltimore Jews United for Justice and co-organizer of the event. “We know how the Holocaust started. It didn’t start in gassing people. It didn’t start with mass extermination camps. It started with the dehumanization, and that is absolutely what we’re seeing at the border,” he said. “So to me as a Jew, as a survivor as a descendant of Holocaust victims, this is exactly when Jews should be stepping up.”

Serpick stressed the importance of raising awareness in the Baltimore community of the compliance of JHU and PNC Bank. “A lot of people don’t really know about the connection to Hopkins. It’s the biggest employer in Baltimore City, it’s a giant institution. And it’s really profiting off of this real inhumane behavior—this dehumanization,” Serpick said. “We can’t have an institution here in Baltimore that sponsors our festivals, that is profiteering off of misery.”

Participants held signs reading “Close the Camps,” “Welcome the Stranger” and “Fight Fascism: De-ICE the USA.” The prevailing slogan, however, was “Never Again Is Now,” referencing the phrase long-used to commemorate the Holocaust and promote the prevention of further human rights violations. Congresswoman Alexandria Ocasio-Cortez was recently under fire for comparing the immigrant detention centers to Nazi concentration camps and using the phrase “Never Again” in reference to the immigration policy during a Facebook live stream. 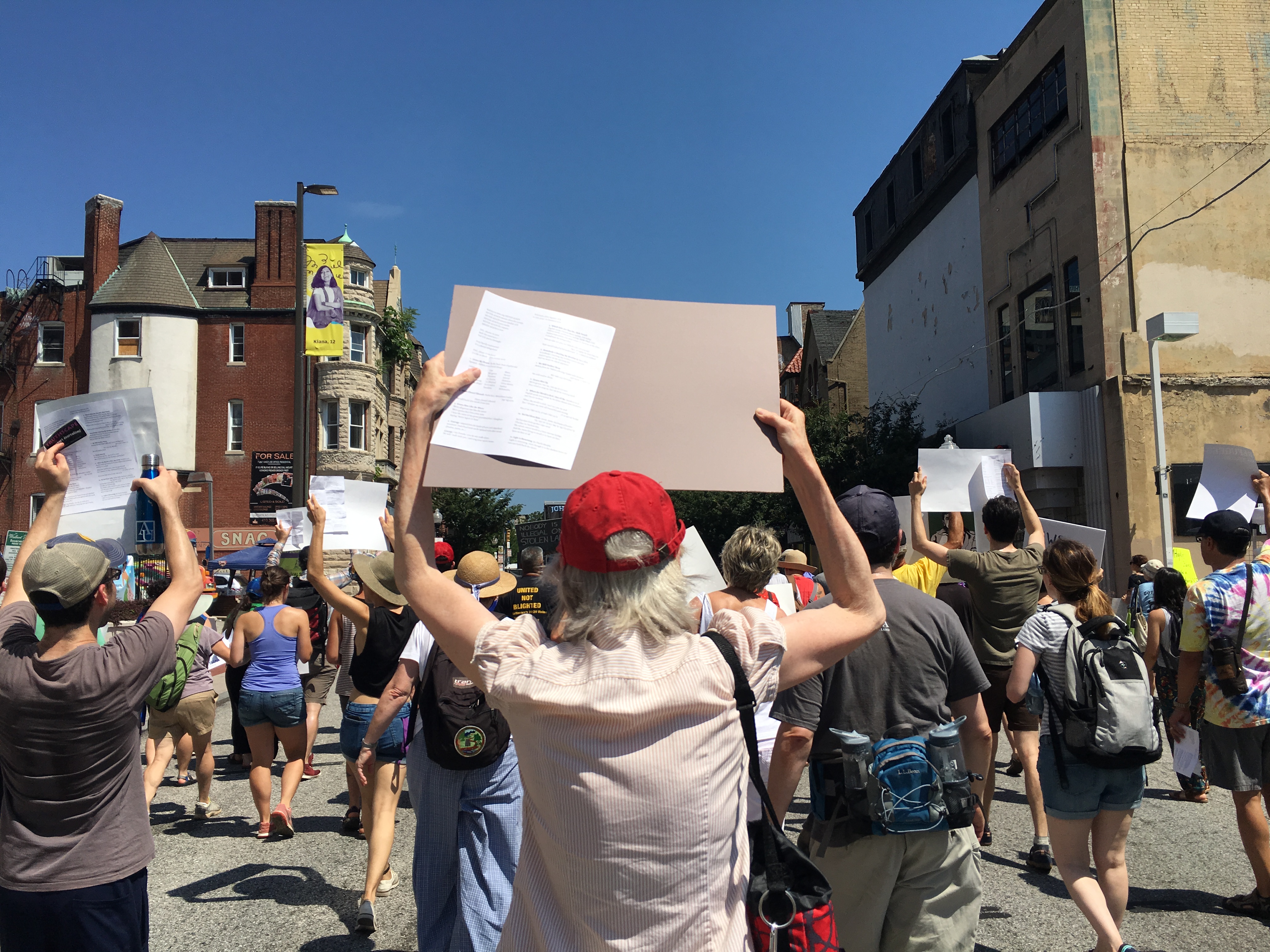 As temperatures near 100 degrees, marchers persist through the streets of Baltimore.

The rally occurred on the Hebrew date of the 17th of Tammuz, a minor fast day which commemorates the Roman breach of Jerusalem’s walls before the destruction of the Second Temple. “[Today], we’re urged to face, feel and reckon with the abject brokenness of the world,” said Amster to the crowd before the rally began. The reason the Temple was destroyed, she said, was because of a hatred of the other.

“We’re taught to remember to welcome the stranger, to not stand idly by the blood of our neighbors. Our history reminds us of the severe outcomes if people fail to do so,” she said. “We were taught to remember what happened to our people during the Holocaust and to never allow the dehumanization of anyone. And never again is now.”

END_OF_DOCUMENT_TOKEN_TO_BE_REPLACED

“You take a child away from their parents, from their home, from everything they know, and they are never the same.”

END_OF_DOCUMENT_TOKEN_TO_BE_REPLACED

Moment Debate | ‘If People Can’t Get Across, They Won’t Have to be Arrested’

I think there should be a limit on immigration, but we shouldn’t restrict it to zero. I think we need to be smarter about its composition and prioritize people with skills that could help the economy.

END_OF_DOCUMENT_TOKEN_TO_BE_REPLACED

America was conceived as a haven of refuge—Thomas Paine says so in Common Sense—for people fleeing from religious and political repression and violence all over the world. He said we would be an “asylum for mankind,” and he did not mean an insane asylum

END_OF_DOCUMENT_TOKEN_TO_BE_REPLACED

After ICE Arrest, Baltimore Jews Ask: Can We Help?

END_OF_DOCUMENT_TOKEN_TO_BE_REPLACED

Why the Israeli Ad Campaign Matters

END_OF_DOCUMENT_TOKEN_TO_BE_REPLACED

People of the Book: Jewish Bialystok and Its Diaspora

Facebook Twitter Pinterest linkedin Telegram
By Symi Rom-Rymer The story of Jewish Eastern European immigration is a familiar one.  Even if one never had the chance to know their ...