Beshert | Sealed with a Kiss

The kiss could have been in a movie. Fun, spontaneous, performed in a crowded room for everyone to witness. Unfortunately, I was not the recipient. With horror, I watched as my Russian uncle, newly arrived in the United States, grabbed my future husband’s face with both hands and planted a heavy lip-on-lip kiss blaring in Russian, “Hello, I am your uncle!”

At that point in our relationship, Brent and I had been dating for a few years and he was used to large and boisterous family dinners where everyone talked over each other in Russian. “What are they arguing about?” he would ask me. “They are not arguing,” I would explain, “They’re just loud and passionate.” This was in the late 1980s and there were no cell phones to distract him from being part of a group conversation that he had no way of understanding. Although I would occasionally translate for him a snippet that I thought he would find interesting, he would sit there patiently observing us, entertained by the laughter, the energy, and the chaos. 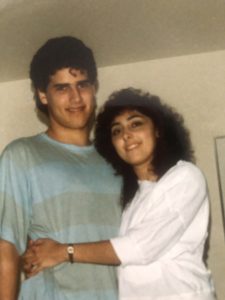 The year they met, as first-year students at The University of Virginia in Charlottesville.

We met the first semester of our first year at the University of Virginia at a fraternity party. It was a Wednesday night. That was our first beshert, “meant to be” moment, because both of us should have been studying. What attracted us to each other? It was Chemistry in both the literal and figurative senses. We ended up totally by chance—another beshert—in the same Chemistry class second semester.

Our backgrounds could not have been more different. Me, from a rowdy, extended Russian-Jewish family that had emigrated to the U.S. only eight years prior, where men kissed each other on the lips in greeting. Him, from a stoic Protestant, military family where fathers and sons only shook hands with an occasional pat on the back.

In the five years we dated, I did not appreciate how accepting and open-minded Brent was in dealing with a culture very different from his. Only in retrospect do I realize how his sense of humor, kindness and understanding played a vital role in keeping us together. My mom’s great cooking sealed the relationship:

“Brent, would you like more pelmeni?” (Her meat-filled Russian dumplings.) 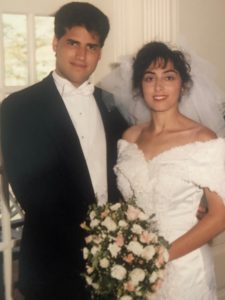 In 1993, we had a blended wedding ceremony that combined the lovely Christian Corinthians quote that love is patient and kind with the dramatic Jewish stomping of the glass that taught us that love is fragile and needs to be nurtured.

Throughout our marriage, Brent never wavered in supporting our three kids through Hebrew school, Jewish summer camps and their B’Nai Mitzvahs. I passed on to our kids my Jewish identity. But through my husband’s actions, they gleaned the most important lessons in life; the ones of acceptance, love and partnership. 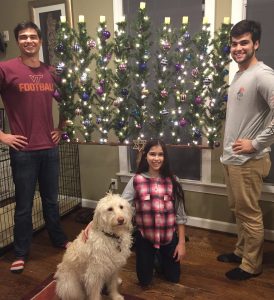 At home, December 2017, with the menorah tree that the family puts up for Chanukah/Christmas.

Elina Blaha was born in Kiev, Ukraine and emigrated to the U.S. with her parents in 1979 at age 10. She is a Doctor of Optometry; her husband Brent is a mechanical engineer. They live in Yorktown, Virginia with their three kids, Jason, Allen and Julia and their labradoodle, Sandy. Elina’s parents live across the street from them so that her mom can maintain a steady supply of pelmeni to keep the family fed. The Blahas will celebrate 27 years married in August. You can read about Elina and Brent’s son, Jason, here.