Dandelions & Manna : Reflections on Jewish Foraging Before & After Sinai

We have counted “ba-Omer,” 49 days, the Week of Weeks between Passover and Shavuot, and now, even in quarantine, we find ourselves smack in the middle of another cause for liberation. As we learn in Exodus, liberation in ancient Egypt gave way to uncertainty as the Jews left the land of Egypt that they had known and their store of wheat dwindled to nothing. Their journey was rife with reluctance and ignorance as they became foragers for both food and identity.

Now is a time of profound hunger and also of great promises, whether of Torah or of democracy. We are guided by what we know, and often (especially in quarantine) overwhelmed by what we cannot know. We are wanderers again and foragers. So comes the inspiration for today’s recipe, honoring the foraging of today and yesterday, the magic and ubiquity of dandelions and manna.

What have we to learn again, what faith in food and life is being asked of us now? We are tasting, in the time of coronavirus and uprisings, a bit of that intense uncertainty and alienation in the face of our future overall, and our future with food.

The magic of manna is related to the reality of manna, an expansive concept of survival with roots in biology. To this day, experts disagree about what manna really was, but many nods go to the dew and condensation process affecting the filaments of the tamarisk tree. Tamarisk is really a bush, producing a sweetened, somewhat nutritious, and delightful dew. I learned that taranjabin or Persian manna (from the camel’s thorn plant), which means “wet honey” in Farsi, is still gathered in Iraq and Iran and is now enjoyed popularly as a powdery nougat, manna al-sama, “bread from heaven.” Jewish confectioners in Baghdad called their balls of sugary delight baba kadrasi, and modern Turkish candy makers offer manna wassalwa. (Moment ran a great piece on manna’s full history and a recipe shared by Nawal Nasrallah from her cookbook, Delights from the Garden of Eden.) 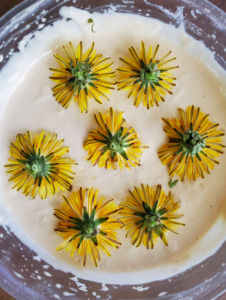 Over these months, as a beautiful spring spread over North America, amid Michigan floods, protests in our streets, fire in my home, world hunger, and plagues of COVID-19 and poverty, I have come to think of manna as akin to dandelions. The ubiquitous dandelion (Taraxacum) is topologically diverse and highly adaptive. Upon morning, dandelions, the most quotidian and persevering of flowers, appear as if out of nowhere—among one’s new crops, out of a crack in a sidewalk, as dots on our lawns and parks. Cut them down one day, they return the next as though bidden by an otherworldly design. Their “clocks,” fuzzy and buoyant, move as if heaven-sent. And like manna, the dandelion is entirely edible, its roots and leaves offering a medicinal tea or a facsimile of other plants such as field spinach.

Most germane, dandelions and manna, now and then, are here for the spiritual eater in uncertain times. Both are simple and magical. Both are not long-lasting, but edible and edifying. Dandelions and manna are, to me, wondrous companions for the Jewish imagination—delightful, sustaining and sustainable, both elements woven explicitly into Torah and nature. 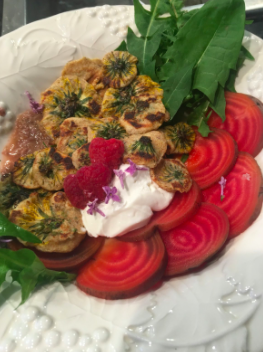 This week’s recipe, in honor of our forage before and after Sinai, takes on two elements. First is the buttery blossom of the dandelion. The second element is the buttermilk batter, fried and drizzled with honey, which transforms a weed into delightful plant food. The dandelion changes itself as we seek its sustenance, deliciously and sweetly so, as though alluding to the milk-and-honey flow of manna.

Please note that I use whole wheat flour for this recipe, but nearly any other flour can be used with good effect. Keep your batter medium in thickness, so it stays on the petals as you dip, but flips lightly off the spatula when done in the pan. Buttermilk is one innovation on this fritter, and curry is the other, since as a spice, curry blends the savory, tang and sweet like the whole of the dandelion. Dandelion fritters complement nearly everything in your kitchen: burgers or brisket, quinoa or sour cream, salads or ice cream (Mmmm, manna on manna!). Have a gracious, healthy summer, happy travels at home. Enjoy what creation has for us outside your door or down your road a little further than you know. Don’t be afraid of the weeds, and have  faith that the manna we know is somehow always there. 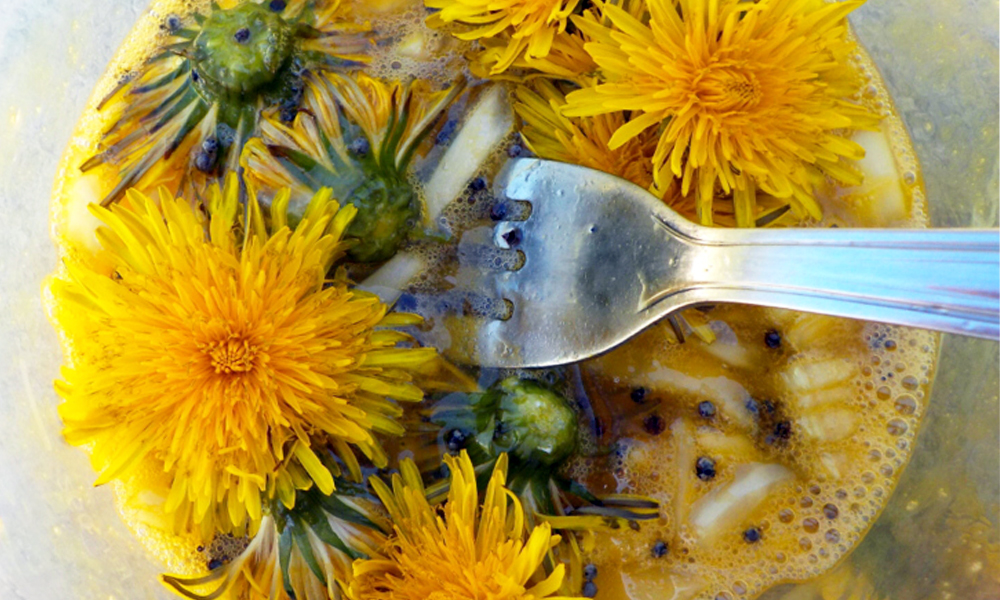 With or without yellow curry

Sour cream and drizzles of honey

Serve as a main or as a side!

Interested in learning more about Jewish foraging? Check out Hazon’s curriculum and programming.

With best Passover wishes from my kitchen and family to yours, here are some recipes and food essays to tempt your palate, expand your repertoire and help bring you into the delight and meaning of the holiday, this year of 2020/5781, as we revisit Mitzrayim (Biblical Egypt) from our own narrowed places.

END_OF_DOCUMENT_TOKEN_TO_BE_REPLACED

Moment will post a new recipe every day. Each recipe has been chosen for children 10 and over (under 10, please cook with a grownup!) and each will offer variations for dietary needs and palette. Every recipe will take less than 30 minutes to prepare and less than three hours to cook.

END_OF_DOCUMENT_TOKEN_TO_BE_REPLACED

2018 January/February, Talk of the Table

Talk of the Table | A Tu B’Shevat Seder for Mystics

The epigram, “They tried to kill us. We survived. Let’s eat!” sometimes serves as a tongue-in-cheek synopsis of Jewish holidays: Passover, for example, recounts the original Jewish survival story in an extended banquet punctuated by four cups of wine.

END_OF_DOCUMENT_TOKEN_TO_BE_REPLACED

Spring Cookbooks for Passover and Beyond

King Solomon’s Table: A Culinary Exploration of Jewish Cooking Around the World / Fress: Bold Flavors from a Jewish Kitchen / Matzo: 35 Recipes for Passover and All Year Long

END_OF_DOCUMENT_TOKEN_TO_BE_REPLACED

When you drive the 45 minutes from Haifa to the Goats with the Wind farm in the lower Galilee, neither the brain nor the underbody of your car has much time to adjust.

END_OF_DOCUMENT_TOKEN_TO_BE_REPLACED

Talk of the Table // Ethiopian Food

Ethiopian food, famous for its spicy stews and the spongy flatbread called injera, burst onto the international food scene—especially in the United States—in the 1970s and 1980s, when thousands of Ethiopians fled political turmoil in their home country.

END_OF_DOCUMENT_TOKEN_TO_BE_REPLACED

Talk of the Table // Olive Oil

It’s the time of the year when we begin to talk about oil. Not just the kind that heats homes, but the kind that burned in the Tabernacle of the Temple—that is, olive oil.

END_OF_DOCUMENT_TOKEN_TO_BE_REPLACED

Talk of the Table // Paprika

Among the trendy ingredients today’s chefs are adding to their repertoires, paprika is the latest darling. Cooks either sprinkle the bright red spice—made of dried and ground red chili peppers—on top of their creations or swirl it with oil to add a crimson hue.