Among the pages of a medieval Middle Eastern cookbook lies a 600-year-old recipe with a title equal parts perplexing and alarming: “Meatballs Cursed by Jews.” I stumbled upon this recipe when I was a doctoral student researching the diet of 13th-century Jews, Christians and Muslims in the Iberian Peninsula. I was looking for recipes that explicitly mentioned the word “Jewish” in the title, and after reviewing the cookbooks of the West under Muslim rule, I became interested in the cookbooks of the Muslim East. And that’s when this surprising recipe title caught my eye.

The cookbook in question was the Kitab wasf al-at’ima al-mu’tada (which translates to “Description of Familiar Foods”). Written in Cairo, Egypt, the oldest known copy of the book dates back to 1373 and contains 420 recipes. It is one among many Eastern Muslim cookbooks of the Middle Ages—but it is the only one to include a dish that explicitly mentions Jews. Makabib la’nuha al-Yahud, or “Meatballs Cursed by Jews,” can be made with any red meat, along with pistachios, cinnamon, parsley, mint, celery and eggs. The meatballs are small—I suggest the size of a walnut—and are to be fried on each side for three minutes.

The cookbook is anonymous; no details about the authors, including their religion, are mentioned. Whoever they were, they provided no context for this baffling recipe title. We do not know why meatballs would be cursed, what such a curse might entail, or why Jews would be the ones doing the cursing.

Without answers to these questions, I set about looking for other clues. During the period the cookbook was written, Egypt was ruled by Mameluk Muslims, who wanted to safeguard the purity of their faith. The existence of 14th-century Jewish communities in Egypt is well established, although the precise number is unknown. It is, however, known that during that time, Jews were arriving from the Muslim West, mainly from Spain; Maimonides, the great medieval Jewish philosopher, also known as the Rambam, was one of those migrants.

But why would the authors of “Meatballs Cursed by Jews” choose to call out Jews in this recipe title? We don’t know their background—could they have been Jewish? But obviously they must have had some sort of interest in Jewish culture and culinary habits. We also do not know what “cursed” means in this context. The name may have simply been a way to emphasize Jews’ unique culinary laws, or maybe Jews wanted to distinguish themselves from cultures that prepared their meatballs differently. Maybe “cursed” even recalls some sort of disastrous event, such as disease or poisoning, involving this dish.

The recipe’s directions provide a few hints: First, the recipe says that the red meat should be boiled and tenderized, and then the veins must be removed. This instruction is interesting because after meat is boiled, it should no longer contain blood—but we are still told to remove the veins, a step that perhaps alludes to kashrut, the system of Jewish dietary laws. On the other hand, both Jews and Muslims are prohibited from consuming blood, so we don’t know for sure which religious dietary restrictions this step is meant to accommodate.

The next piece of the puzzle appears 400 years later, in the 18th-century copy of the same cookbook. In this later copy, the meatball recipe is still there, but the title has changed; the term “Cursed” has disappeared. Instead of “Meatballs Cursed by Jews,” the recipe is called Makabib al-Yahud, or “Meatballs of the Jews.” As might be expected, the cookbook leaves the title change unexplained.

There are several other differences between the two editions. While the 14th-century edition directs us to remove the veins from the meat before grinding, the 18th-century edition instead says to remove the tendons. With this change, it seems likely that the recipe is written with the laws of kashrut in mind, since eating the sciatic nerve is forbidden. And while the original recipe calls for red meat, often used in meatball recipes in Eastern cookbooks, the newer recipe calls for lean meat, often specified in Jewish recipes. Another early Muslim cookbook, the Kitab al-tabih (which translates as simply “The Cookbook”), dates back to 13th-century Spain and includes six recipes that use the word “Jewish,” all of which are made with partridges, chicken or lamb, all lean meats.

While so much about this recipe is unknown, there’s one thing we can be sure of: “Meatballs Cursed by Jews” are delicious. They are easy to make in advance, as they stay soft and juicy, and can be served in a small bowl or on skewers for a buffet. These meatballs also can be easily shared, making them perfect for Shabbat and other special occasions. 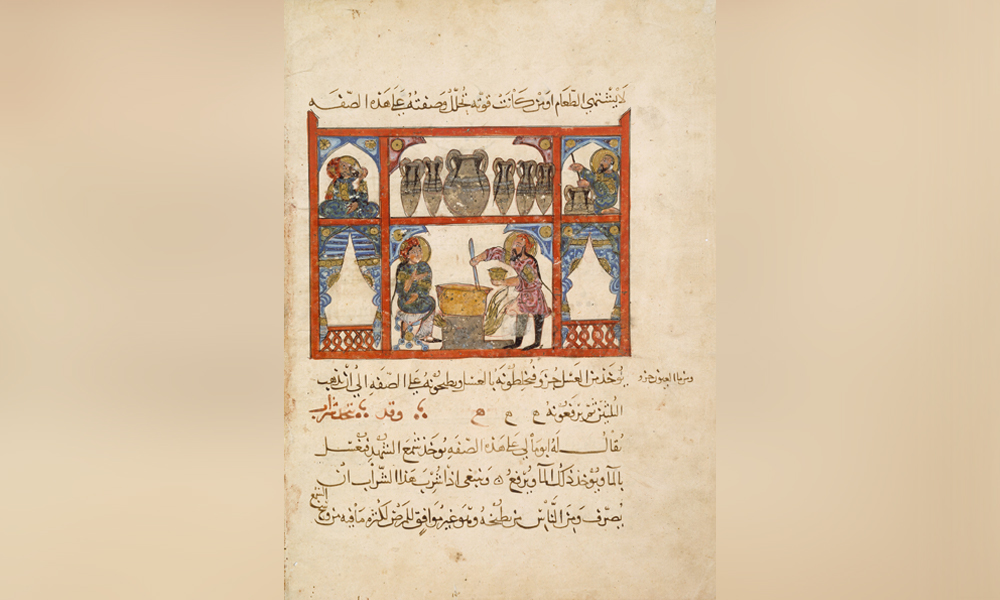 Depiction of a servant preparing medicine from honey from a popular medieval cookbook. Published in Baghdad in 1224.

1. If not already ground, take the lean meat and pound it to tenderize. Grind it finely in a chopper.

2. Chop the pistachios and add them to the meat. Mix. Add the cinnamon and the black pepper.

3. Mix with a spoon and add the salt. Chop the parsley, mint and the celery leaves. Add them to the meat.

4. In a separate bowl, beat the egg. Mix it with the meat. Refrigerate for 10 minutes.

5. Pour the oil(s) into a frying pan and heat over medium heat.

6. Take the meat mixture and form small, walnut-size balls. You can roll them in breadcrumbs if you want. Fry them for 3 minutes without moving them. Then, turn them over and cook for another 3 minutes until golden.

END_OF_DOCUMENT_TOKEN_TO_BE_REPLACED

Talk of the Table | A Savory Georgian Feast

Nestled between the shores of the Black Sea and the Caucasus Mountains, the country of Georgia is a land where different cultures