The Girl in the Blue Sweater: One Pandemic later

It was a year ago that I was seated across from Helena Weinrauch at a friend’s second-night seder. She had walked in with an air of grace, wearing a long skirt, a striking sapphire-blue sweater and multiple strands of pearls around her neck. When I complimented her on her sweater, she was quick to ask if I’d like to hear the story behind it. Little did I know what was about to unfold.

Helena’s story, which I wrote about for Moment, was enthralling. That seder night, she was wearing her special Passover sweater. It had been a gift from a friend, a fellow Auschwitz survivor, while they were recovering in a Swedish hospital. Ann, a master knitter, had given the sweater as a holiday offering, telling Helena, “Since we have no family, no home, and no money, at least you’ll have something nice to wear for Passover.” Helena has worn it every Pesach since.

Later that evening, I posted a few lines about Helena and her blue sweater on Facebook. Within a day it went viral. Messages arrived from Sweden, Holland, Luxembourg, South Africa, Brazil, Australia. A Swedish woman whose grandmother had worked in a hospital after the war asked if Helena remembered the name of her nurse. Another woman wrote from Australia wondering if Helena had encountered her grandfather, who had also recovered in a Swedish hospital. Helena’s story had touched a nerve around the world. 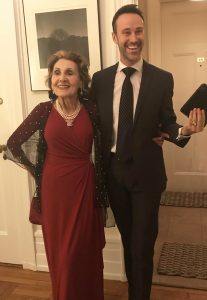 Helena and her dance partner, Slavi

A year later, we speak every day, staying close during this pandemic. Helena, soon to turn 96, is quarantined alone inside her apartment on Manhattan’s Upper West Side. It’s a home filled with memories. Photographs, books and artwork, much of it from her travels, cover walls and shelves. But her kitchen calendar, once abrim with engagements—lunches, dinners, concerts, plays—is now blank. Like all of us, she is eager to reclaim her pre-COVID life—her thrice-weekly ballroom dancing most of all. Her dance partner, the well-known instructor Slavi Baylov, is quarantined upstate. On his daily call to check in with her, he encourages her to visualize the day when they will dance again. “Dancing with my partner keeps me alive,” she often says. “That’s the one joy in my life. When I dance, I forget everything.”

Helena’s Passover this year was a solitary one. A full seder meal was left at her door by a friend. But did she wear her now-famous blue Pesach sweater? When asked, she answers thoughtfully. “At first I felt it was silly to put it on, since I was home alone. And honestly, I was a little depressed. But then I realized it was about honoring the memory of my friend and keeping the tradition alive. So I took it out of the closet and laid it on my bed. I remembered my friend Ann, who knit it 70 years ago, and then I put it on.”

This pandemic has left Helena homebound with, she says “too little exercise and too much thinking.” This year, Helena’s “second birthday,” as she calls it, was extra solemn. On that day in 1945, she was liberated from the Bergen-Belsen concentration camp. “It was a very, very emotional day for me. Seventy-five years ago I was a skeleton lying amongst the dead. I was starved and weighed 52 pounds, suffering from typhoid and dysentery. I was put on a truck piled with corpses to be buried.”

But Helena’s destiny changed when a British soldier realized her body was warm, and that she was still alive. She was brought to a local hospital. “A British Captain took an interest in me and when I needed blood, he gave me his blood. You didn’t know that I have British blood in me! He saved my life. I have two birthdays, one on June 6, one April 15.”

This year, in quarantine, that dark past haunts Helena during her hours of “too much thinking.” It doesn’t help that she’s within the virus’s highest-risk group. “In the camps, I knew who the enemy was. But now, the enemy is invisible.” Life is frightening—again. Helena valiantly battles the ghosts of the past who visit her apartment in the still of the night. Dark chocolate and pungent Chimay cheese help. And in the morning, when the ghosts disperse, Helena is cheered by phone calls from friends around the world and short walks to Riverside Park. She reads The New York Times with her cup of espresso and doesn’t miss Governor Andrew Cuomo’s daily press conference. His demeanor, Helena says, is calming and reassuring. She, along with the rest of us, has a crush on him.

Helena is surviving. Once again, she says, she is one of the lucky ones.

END_OF_DOCUMENT_TOKEN_TO_BE_REPLACED

5 thoughts on “The Girl in the Blue Sweater: One Pandemic later”