Does ‘Jojo Rabbit’ Have Anything New to Say About Fascism?

Charlie Chaplin famously said that, had he known in 1940 the full extent of the atrocities the Nazis were inflicting on Europe’s Jews, he never could have made The Great Dictator. There would’ve been nothing funny about Adolf Hitler after understanding his full capacity for evil, Chaplin believed, and nothing to be gained by depicting the Führer as a petulant man-child who could be brought to his knees by a few spoonfuls of spicy mustard. Paradoxically, it was Chaplin’s ignorance of Hitler, largely due to the lack of information trickling out of the concentration camps at the time, that allowed him to construct the most savage and necessary takedown of the despot in entertainment history.

Taika Waititi is no Charlie Chaplin, but he’s the closest thing our generation has. The mixed-race comic director and actor from New Zealand, who has Jewish heritage on his mother’s side and refers to himself as a “Polynesian Jew,” has honed his distinctive brand of dry, absurdist humor over the last decade in films like Hunt for the Wilderpeople and Thor: Ragnarok. So naturally, like Chaplin before him, Waititi has donned a mock SS uniform to play Hitler in his own Nazi comedy.

Jojo Rabbit, which is shaping up to be easily the most divisive film of the awards season, shows us the Third Reich through the eyes of a child: ten-year-old Jojo (lovable newcomer Roman Griffin Davis), who treats his Führer like a rock star and can recite anti-Semitic canards by heart. Adolf is his imaginary friend. He cheers Jojo on from the sidelines, like Hobbes to his Calvin, while the kid traipses through a Hitler Youth training depicted in bright, eye-popping colors; he’s so happy to be part of a group that he hardly gives a thought as to what that group stands for. Jojo is a familiar Waititi stand-in, as the director has built several films around socially awkward, pop-culture-obsessed preteen boys, and making Hitler-worship just another kind of “stan culture” among the German youth is one of the film’s best ideas. (Waititi’s script is based on the novel Caging Skies by Christine Leunens.)

In one regard, Waititi is right where Chaplin was wrong. Even knowing what we do today about Hitler, we must still mock him and the Nazi ideology: mock them often, mock them mercilessly. Point and laugh and show everyone how ridiculous and vapid and hateful they are until they go away, and then do it some more. That basic truth hasn’t changed between 1940 and our current moment of global fascist resurgence. But what has changed is that we now know how bad fascists can get, and we have boatloads of scholarship that make clear their mindset has survived beyond the framework of World War II. It’s one thing to mock the mannerisms and bloated ego of a highly visible leader, as Chaplin did, or to play your audience’s visceral hatred of him for laughs, as Mel Brooks did with The Producers. It’s another thing entirely to mock the everyday folks who did believe in guys like him, and who still might do so today, if given the chance.

Jojo Rabbit is very aware of this, maybe a bit too aware. This is the first time I’ve ever seen a self-proclaimed “satire” that seemed to be genuinely scared of itself. Early festival screenings of the film even came with a pre-roll message from Waititi assuring the audience that the movie is against hatred. The thing is, Jojo never takes itself or its hate seriously enough to become legitimately dangerous. It drapes the Third Reich’s indoctrination methods in a thick coat of present-day irony, Waititi’s favorite mode as a director; then it pivots awkwardly into serious drama, which he is decidedly ill-equipped for.

The kid’s superiors (including a general played by Sam Rockwell and a fraulein played by Rebel Wilson) issue commands with the buffoonish wink of a Saturday Night Live sketch. The choice to set the story near the tail end of the Reich renders them even more impotent; they are obviously propping up a failing nation-state from the very first scene. The Nazis in Jojo’s immediate circle come off as fundamentally harmless and lovable: When bad things do happen, they are always perpetrated by the faceless regime, never by any individual character. Before this bumbling lot can cross into nefarious territory, the Nazi kid meets the Jewish girl in his attic and has his change of heart. 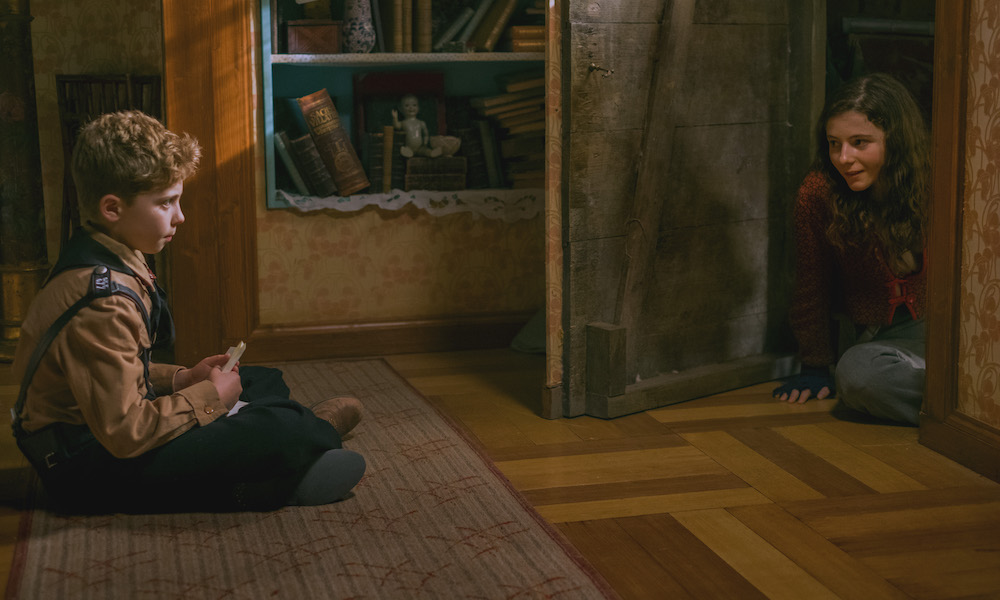 That Jewish girl is the teenaged Elsa (Thomasin McKenzie), and she’s stashed in Jojo’s house at the invitation of his mother (Scarlett Johansson), who’s secretly a member of the Resistance and fears she’s losing her son to the lure of the brownshirts. The thing about Elsa, though, is that her character doesn’t make sense, either historically or in the context of the story. Jojo’s discovery of Elsa is played for broad laughs—she climbs out of the floorboards fingers first, like a tentacled creature from a horror movie, and quickly proves herself more capable than the soldier-in-training by stealing his knife and mocking his manhood. (She also feeds him absurd myths about Jews for her own amusement.)

Elsa’s hipper-than-thou sheen never really fades, and her atonal indifference to the actual danger of being a fugitive Jew in Nazi Germany makes her seem like a time traveler from the present, blessed with the knowledge that she will survive and this is all make-believe. McKenzie is a gifted actress who headlined the best film of last year, Debra Granik’s dreamlike wilderness fable Leave No Trace. But she can’t find the internality of a character who exists as a cipher, outside the psychological realm of sympathy. Late in the film, for various reasons, Elsa and Jojo are left on their own, two kids against a cruel world. It feels less like a grand moment of mutual understanding and more like a desperate attempt to avoid any kind of meaningful unpacking of the Jewish wartime struggle.

What to do with Jojo, exactly, as it goose-steps in line next to Dictator, To Be or Not to Be, The Producers, Inglorious Basterds, Look Who’s Back, etc., in the canon of Nazi-skewing comedy? In the end, the film is an ambitious failure. It’s pitched somewhere between cutting black humor, doe-eyed children’s fable and wartime weepie, an unwieldy mix that does little for our current understanding of fascist ideology. Some scenes borrow wholesale from the 1997 tearjerker Life Is Beautiful, an association that will immediately write off Jojo in the eyes of many viewers who felt cheated by that film’s cloying sentimentality. And even if you liked Life Is Beautiful, it’s regardless a far cry from the edgy absurdism Waititi wants to project.

Funny enough, Hitler might be the best thing about it. Because we only see the sweet and encouraging vision of him that Jojo imagines, played by Waititi with the same type of goofy-grinned arrogance he brought to his vampire in What We Do in The Shadows, it’s easy to understand how this mindset could worm its way inside impressionable youth of all stripes—like when I read Matilda as a kid and imagined its hero taking down my school bullies with her psychic powers. To put it another way, Jojo’s Hitler says more about Jojo than it does about Hitler. In a film that tries to explain fascism by throwing out every tone and mood under the sun, it turns out the most childlike explanation is the most resilient one.

END_OF_DOCUMENT_TOKEN_TO_BE_REPLACED

2 thoughts on “Does ‘Jojo Rabbit’ Have Anything New to Say About Fascism?”