Talk of the Table | A Naturally Gluten-Free Holiday

As the holiday approaches, grocery stores stock up on “kosher for Passover” selections—and people with celiac disease or gluten sensitivities know they’ll be able to find more options than at any other time of the year. “Ten years ago, the only time you could find gluten-free stuff in a regular supermarket was during Passover,” says registered dietitian and nutritionist Cheryl Harris, an expert on celiac disease who also blogs about the gluten-free diet. Many Passover foods are also devoid of soy (which some Ashkenazi Jews avoid during the holiday) and dairy (which can’t be mixed with meat). “For people with multiple food intolerances,” Harris says, “Passover is a bonanza of food that isn’t usually available.”

For those with celiac disease—about 1 percent of the population—even tiny amounts of gluten cause intestinal damage, along with a host of debilitating symptoms. It is a serious autoimmune condition, and the only treatment is a strict, lifelong gluten-free diet. Gluten sensitivity is trickier; these patients test negative for celiac but still report symptoms after eating gluten. Around 3 million Americans eat gluten-free—a number that tripled between 2009 and 2014. As more people adopt gluten-free diets, tasty gluten-free treats have become more widely available year-round—and it turns out that many of these newer, better, gluten-free options can double as Passover fare.

When cookbook author Paula Shoyer first started developing Passover recipes, she had to make the best of what few ingredients were available. The existing recipes were limited: Think lackluster brownies, sponge cake, dried fruit balls. “In the past, if you were looking for a dessert recipe, you would be googling ‘Passover desserts,’” she says. But now, many gluten-free recipes can be used for Passover, and it’s easy to find ingredients such as ground nuts, tapioca starch and almond milk, she says. “I like using nut flours more than I like using matzah cake meal, just because the flavor is so much better.” Her favorite dessert is chocolate quinoa cake—a “fudgy, delicious bundt cake that I would serve to any gluten-free guest all year round,” she says. “For a home baker or a home chef trying to put together a meal, there’s just much more out there.”

The exception is matzah: The unleavened Passover staple, eaten to symbolize how quickly the Jews left Egypt, is one of the few traditional Passover foods that usually contains gluten. Luckily, gluten-free options made from substitutes such as tapioca starch and potato flour abound. But according to Jewish law, matzah is actually required to be made from one of the five grains—so for more religious Jews, not all matzah substitutes make the cut. Gluten-free oat matzahs are acceptable, but while they have become more widely available in recent years, they tend to be expensive. Lakewood Matzoh uses certified gluten-free oats—but it costs $26 per pound.

Sales for gluten-free products have more than doubled in recent years. And in some cases, the general market has even drawn on the Passover market for ideas, says Rabbi Menachem Genack, CEO of the Orthodox Union’s kosher division, a food certification agency. Around 20 years ago, a team from Columbia Presbyterian Hospital, hoping to create a gluten-free certification, came to the Orthodox Union for advice: Looking to create products with gluten substitutes, they used Passover products as a model.

But these days, he says, gluten-free options are expanding everywhere—in the general market and kosher market alike. “It’s become sort of a craze.” The company Yehuda Matzos makes gluten-free “matzo-style squares” from tapioca starch, potato starch and potato flour. Manischewitz also sells gluten-free matzah-style squares, along with a line of other gluten-free products, including crackers, egg noodles and matzah ball mix. This year, out of an estimated 350 new Passover products, at least 20 percent will be gluten-free, says Menachem Lubinsky, a kosher marketing expert. Other kosher companies have even larger gluten-free selections year-round—such as Katz Gluten Free, which has been selling kosher gluten-free food exclusively for more than ten years. Only a handful of booths at Kosherfest, a trade show for kosher-certified products, used to offer gluten-free options—but today there are over 100, says Lubinsky. In the future, “more and more products that can be made gluten-free will be made gluten-free. We may very well be just at the beginning of the revolution.”

But matzah aside, most Passover food is naturally gluten-free—and there’s no need to stock up on gluten substitutes. In fact, food writer Susan Barocas, who served as guest chef for several White House seders, thinks people tend to use matzah too often during Passover: “People who don’t have bread out at every meal suddenly feel compelled to have matzah out at every meal,” she says. According to Jewish law, “we’re supposed to taste matzah, we’re supposed to eat it—but it doesn’t say we have to eat a lot of it.” Barocas views the holiday as an opportunity for eating fresh, healthy and local options. “A lot of people complain, ‘Oh, it’s a terrible week, I eat so unhealthy.’ But why?” So instead of matzah—or foods made from matzah—she suggests options such as nut cakes and meringues. Shoyer agrees: “Focus on the food you can eat,” she says. “As food gets healthier and more natural, Passover becomes less of a burden.” And as long as you’re using simple, healthy ingredients, “you can eat the same food on Passover that you eat all year long.” 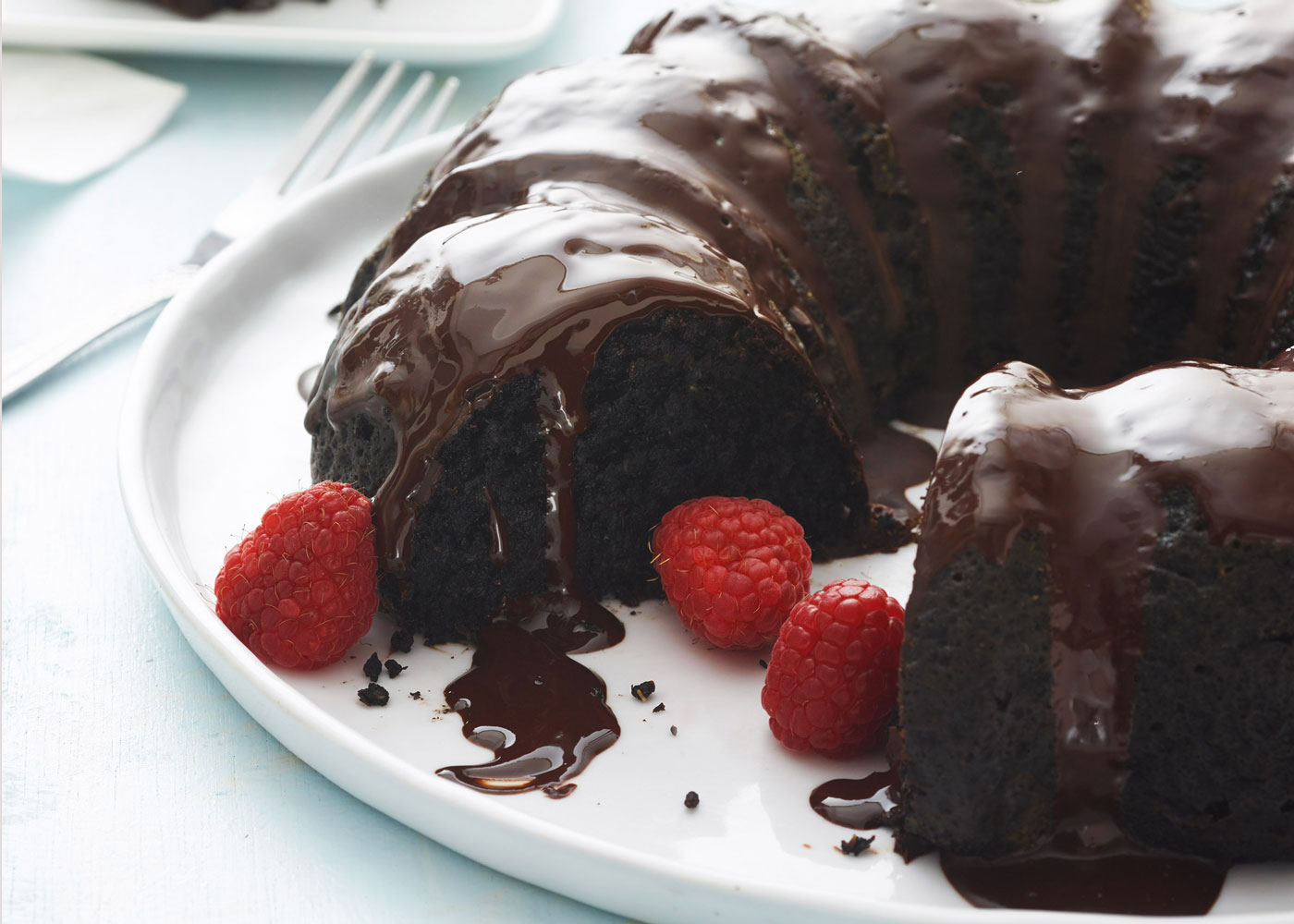 Advance Prep: May be made 3 days in advance or frozen

Directions
1. Place the quinoa and water into a small saucepan and bring it to a boil over medium heat. Reduce the heat to low, cover the saucepan, and cook the quinoa for 15 minutes, or until all the liquid has been absorbed. Set the pan aside. The quinoa may be made one day in advance.
2. Preheat the oven to 350°F (180°C). Use cooking spray to grease a 12-cup (2.8L) Bundt pan. Sprinkle the potato starch over the greased pan and then shake the pan to remove any excess starch.
3. Place the quinoa in the bowl of a food processor. Add the orange juice, eggs, vanilla, oil, sugar, cocoa, baking powder and salt and process until the mixture is very smooth.
4. Melt the chocolate over a double boiler, or place in a medium microwave-safe bowl, and put in a microwave for 45 seconds, stirring and then heating the chocolate for another 30 seconds, until it is melted. Add the chocolate to the quinoa batter and process until well mixed. Pour the batter into the prepared Bundt pan and bake it for 50 minutes, or until a skewer inserted into the cake comes out clean.
5. Let the cake cool for 10 minutes and then remove it gently from the pan. Let it cool on a wire cooling rack.
6. To make the glaze, melt the chocolate in a large microwave-safe bowl in the microwave (see above) or over a double boiler. Add the oil and vanilla and whisk well. Let the glaze sit for 5 minutes and then whisk it again. Use a silicone spatula to spread the glaze all over the cake.

From The Healthy Jewish Kitchen, by Paula Shoyer, reprinted with permission from Sterling Publishing