Talk of the Table | The Power of Couscous

Einat Admony is an Israeli chef known for her modern and irreverent interpretations of Middle Eastern cuisine. Her “everyday cauliflower,” for example, is made with the popular Israeli snack Bamba and peanut tahini. Admony’s new restaurant in Manhattan’s West Village, Kish-Kash, however, is a change of tone, dedicated to traditional Jewish North African cuisine. Why the change? Behold the power of couscous.

You may be familiar with the five-minute couscous that’s available in supermarkets, but hand-rolled couscous, the kind Admony makes fresh every day in what she calls “New York’s first couscous bar,” requires a lot of patience, practice and time-consuming labor. First made by Berber tribes of North Africa, and to this day a staple in Morocco, Algeria, Tunisia and western Libya, couscous goes by many different names: The Berber called it sekruo or seksu, in Algeria it’s kisku or ta’am, and in Tunisia it can be kiskisi, kisskiss, kuskusi or kusksi.

Throughout the Maghreb, couscous was traditionally prepared by groups of women, family and friends, who helped each other pass the long hours it took to make. First, they spread semolina wheat, bought by the men and freshly ground, onto a large round platter, sprinkling it with salted water and sometimes flour. They then rolled the grains with their hands, adding more water and flour as necessary, until the couscous granules formed. “The soothing sound of gold bangles on your mother’s hand banging again and again against the aluminum tray is the sound of home,” recalls Pascale Perez-Rubin, an Israeli food historian and journalist who grew up in a Jewish-Tunisian home. The couscous was then sifted through a special sieve to form equal-size bits. Finally it was either cooked and served or left to dry for a few days in the sun.

Before preparing, Jews moistened the dried couscous with a little salted water and oil. “Traditionally, Muslims used samneh”—clarified butter—“which the Jews avoided for kashrut reasons,” says Perez-Rubin. “This made a big difference in the flavor and aroma between the two.” The couscous was then steamed in a special dish called a couscousière, similar to a steaming pot. It was placed in the upper perforated section called kishkash or kiskis—the origin of the name of Adomy’s restaurant—and the stew that accompanied it in the lower pan. After the first steaming process, the couscous was left to cool, mixed or sifted again to keep it airy, then steamed once more—or several times more—before serving. The process is so lengthy that even Moroccans prefer ready-made couscous these days.

How couscous is served depends on where you are. While Moroccans serve their stews over the couscous in a covered earthenware pot called a tagine—with the couscous in the center, meat on top and vegetables around it­—Tunisians ladle the couscous into one bowl, the broth into another and the vegetables and meat into a third, allowing guests to create their own combinations. In Sicily, couscous is served with fish stews, and in Livorno (Italy), it is accompanied by meat, traditionally lamb. (In her book, Cucina Ebraica, Joyce Goldstein claims that Jews who came from North Africa in the 13th century first brought couscous to Italy.)

There are lesser-known varieties of couscous: The Palestinian maftoul and Lebanese moghrabieh are rolled into larger pellets of fine and coarse wheat before steaming. Maftoul are about the size of the Italian orzo, and moghrabieh (meaning “coming from the Maghreb”) are about the size of chickpeas, and both come topped with chicken, onions and chickpeas. American consumers may be familiar with what is marketed as Israeli couscous, which has gained popularity in recent decades. Known in Israel as ptitim, it is prepared by kneading the dough, as opposed to rolling wheat with water, and boiled, rather than steamed, similar to pasta. A staple of many weekday family lunches in Israel, ptitim was invented in the 1950s during a time of deep austerity, when rice, which was in high demand by Mizrachi Jews, was scarce. Then-Prime Minister David Ben-Gurion asked Osem, the dried-food manufacturer, to come up with a carb substitute for rice, and Israeli couscous was born. The original recipe was modeled on farfel, Ashkenazi noodles shaped like a rice grain, which later became round. Palestinians often point to the similarity between their maftoul and Israeli couscous, arguing that Israeli couscous is neither couscous nor Israeli.

In Israel, Jewish North African families eat couscous on Tuesdays and Fridays. This tradition dates back to Tunis, where bakeries were closed on Tuesdays. “If they have no bread, let them eat couscous,” says Admony. Tuesday couscous is served with a simple soup and Shabbat dinner couscous with mafroum (Tripolitan beef-stuffed potatoes in tomato sauce) or boulet (a Tunisian stew with vegetables but no tomato sauce). Other classic couscous stews include t’becha bil kar’a—pumpkin and chickpea with or without meat.

Although it is considered a poor man’s dish, couscous symbolizes good luck and prosperity, says Perez-Rubin, and so it is a favorite for holidays and family celebrations. Moroccan Jews eat a seven-vegetable couscous on Rosh Hashanah topped with tanzia, a sweet stew of dried fruit, nuts and onion. Other North African communities decorate their holiday couscous with dried fruit and saffron. For Shavuot, Tunisian Jews mix a coarser, unsifted couscous with milk, sugar and cinnamon, while Algerians use milk and green fava. There is even dessert couscous: Tunisian farka cake is made with layers of couscous and dates, nuts and cinnamon, all steamed together, then drizzled with sugar syrup.

“Couscous is versatile,” says Perez-Rubin. “It takes form and changes according to the occasion.” 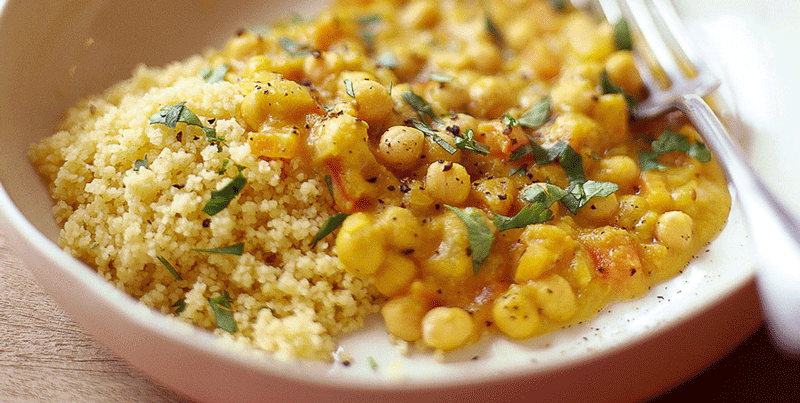 This simple Tunisian dish is served with a stew of butternut squash or pumpkin, potato, carrots and chickpeas and cooked with a little turmeric. It’s fat free, the vegetables are high in carbs, the chickpeas provide protein and the whole wheat couscous is full of fiber. The combination helps you stay full for a long time, making it an ideal dish for the seudah mafseket, the pre-fast meal of Yom Kippur.

1| In a large pot over medium-high heat, bring vegetable stock to boil. 2| Add the rest of the ingredients, except for salt, bring to boil, then reduce heat to low. 3| Cover and cook for 1 hour, until all vegetables are tender. Add salt to taste. 4| Prepare couscous according to package directions. 5| In each bowl put a few tablespoons of couscous, top with vegetables and chickpeas with some of the stock and serve.

END_OF_DOCUMENT_TOKEN_TO_BE_REPLACED

2 thoughts on “Talk of the Table | The Power of Couscous”